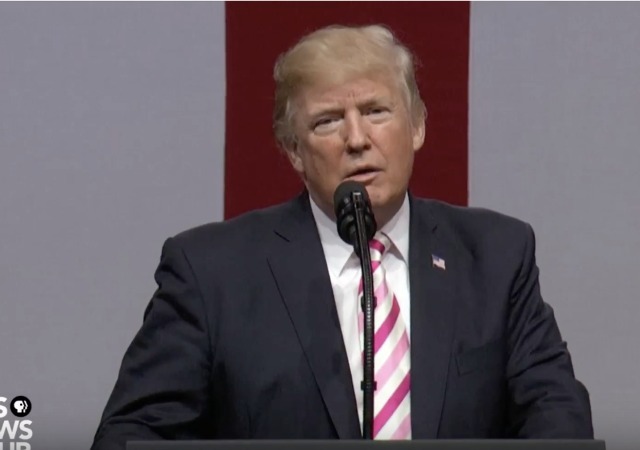 The remaining files related to the JFK assassination are required to be released on October 26th.  As the date approaches, the media began musing about how likely President Trump is to block their release, at least in part.

On Friday, Politico published an article entitled, “Trump Likely to Block Release of Some JFK Files.”  It is standard procedure to hold back and/or redact information that is potentially damaging to national security, but Politico makes it sound like some dastardly Trumpian plot to hide information from the public.

The article was sourced by “anonymous White House officials” and was quickly picked up by other outlets and made the social media rounds.  Why a source needs to be anonymous to state the obvious is anyone’s guess.

Trump administration and other government officials say privately that President Donald Trump is almost certain to block the release of information from some of the thousands of classified files related to the November 1963 assassination of President John F. Kennedy that are scheduled to be made public in less than a week by the National Archives.

Administration officials would not identify what specific information related to Kennedy’s murder might be kept secret on Trump’s orders, though they acknowledged concern over classified documents held at the Archives that were created decades after the assassination—specifically, in the 1990s.

The officials held out a slim possibility that the always-unpredictable Trump could decide at the last minute to release all the remaining JFK files held at the Archives—tens, if not hundreds of thousands, of pages of long-secret documents—but said it was highly unlikely, especially because of concern that documents from the 1990s might expose relatively recent American intelligence and law-enforcement operations. Some of those documents could be partially released, with some of the information blacked out, they said.

. . . . Almost 54 years after Kennedy’s murder in Dallas, a White House decision to block the release of any of the documents will outrage historians, other researchers and the nation’s army of conspiracy theorists—who have been waiting for years for the release of the last of the assassination files. A bipartisan group of lawmakers on Capitol Hill has joined together in recent months to call for full disclosure of the JFK files.

It is unclear how many documents may be held or how much the released documents will be redacted, but there is nothing unusual about sensitive materials being withheld for the sake of national security.  Trump is indeed likely to withhold some files and information, specifically that related to CIA procedure and even the identities of current CIA officers.  This isn’t news.

All the drama the media attempted to create was completely unnecessary.  Today, the president indicated that he will indeed permit release of the long-awaited files.

Subject to the receipt of further information, I will be allowing, as President, the long blocked and classified JFK FILES to be opened.

President Donald Trump said Saturday morning he intends to allow the scheduled release of classified government documents about President John F. Kennedy’s assassination, though he left open the possibility that some could still be withheld.

. . . .  The statement comes five days from an Oct. 26 deadline to release all documents related to the 1963 assassination that remain undisclosed. Congress mandated in 1992 that they all be made public within 25 years, unless the president determines that doing so would undermine intelligence, law enforcement, military operations or foreign policy.

There are more than 3,000 documents in this collection that have never been seen by the public, and more than 30,000 that have been released but with some information redacted.

If Mr. Trump approves the release, the National Archives will post the trove of documents to its website at some point before the Thursday deadline.

Politico‘s salivating over the potential for the Trump-inspired wrath of historians and researchers illustrates yet again why the media is losing credibility at a stunning rate.  Why not simply wait a day or two and find out what the president decided and then report that as straight news?  Dumb question, I know.

It won’t make any real difference. There will be no “smoking gun” in any of the documentation. If there was any real link to any intelligence agency, or even to organized crime, it would not sho up in the “official” files. And, that is what is going to be released, the remaining “official files”. However, there is likely to be things which could prove to be embarrassing to certain organizations, and possibly even to certain people in the.

If we accept, for the moment, that Lee Harvey Oswald was the lone gunman, or even ONE of the gunmen, then certain agencies, such as the FBI and CIA may have to answer either why he was not under close observation, or if he was, who was doing it and why did they not warn the Secret Service of the planned attack? After all, OOswald had moved to Russia, and stated his intention to renounce his US citizenship, which, according to reports, he never did. Then two and a half years later, he went back to the US Embassy, in Moscow, where his passport was returned to him, a visa was issued to his newly minted wife, a Russian citizen, he was given a “repatriation loan” and he returned to the US. Once back in the US, he almost immediately joined Fair Play for Cuba, a pro-Castro organization. There were also reports that he contacted the Russian Diplomatic Service and even went to the Cuban and Russian Embassy in Mexico City [which may or may not have happened]. Now, this was the height of the Cold War. Here was a former US Marine, who had “defected” to the Soviet Union, married a Russian national and then returned to the US, where he joined a pro-Castro organization. Does anyone think that he would not be under surveillance? This was Hoover’s FBI, after all. Yet, we are led to believe that no one was interested in little Lee Harvey, until after he pulled off the assassination of the century. If he was, or should have been under surveillance, and managed this, then it is embarrassing, at the very least.

To sell the Oswald as lone gun man theory, our intelligence agencies may well have provided certain “facts” to support that. The threat to those agencies comes, not from the “facts” themselves, but from how those facts are not supported, or even rebutted, by other information which has come to light since then. For 54 years, Lee Harvey Oswald has been the man who shot John Fitzgerald Kennedy, with quite possibly the worlds most inaccurate military rifle, from several hundred feet away, at a downward angle, through intermittent foliage which obscured his target. I will not go into the questionable ballistic evidence and reports.

There might well be valid reasons why some people would not wish to have all of the information in the official assassination report documents made public. But, it is not to keep us from finding out who killed JFK, if it wasn’t Oswald.