On October 25, 2017, I gave a speech at Vassar College on “An Examination of Hate Speech and Free Speech on College Campuses.” The main sponsor was the Vassar Conservative Libertarian Union, which also sponsored my 2014 speech at Vassar. Other sponsors were Students for Liberty and the Leadership Institute.

The lecture originally was advertised as “‘Hate Speech’ is Still Free Speech, Even After Charlottesville.” The name was changed because the sponsoring student group filed for funding under another title, so we were asked to use that approved title.

Regardless of title, the planned discussion of hate speech sent a portion of the campus into a vicious smear campaign against me.

Hundreds of students, faculty and staff on campus were whipped into a frenzy by false and malicious accusations, originating it appears with a student group Healing 2 Action, but also spread by the Vassar Student Association. In addition to maligning me personally, accusations were spread falsely claiming White Nationalist supporters might come to campus to target students of color, LGBT students, Jewish students and others.

VSA originally was one of the co-sponsors, and agreed to pay part of my fee (which I still expect it to pay). But during the hysteria, the Executive Board of the VSA unsuccessfully requested that Vassar’s President, Elizabeth Bradley, cancel my appearance and find a way to breach its contract, based on the accusations (bold and italics in original).

…. We strongly urge you, on account of students undergoing serious and real pain, to take our words and ideas seriously, and work towards breaching the contract, ultimately preventing him from coming to campus on Wednesday. On account of the timeframe under which we are operating, we urge the College to undertake speedy and urgent action, as outlined in the beginning of this communication, for the wellbeing of our community. We also urge you to denounce the sentiments and ideologies underlying these types of events, instrumentalizing the language of“free speech” to allow a platform for hate .

We urge you to think critically about these things. Rather than just engaging the abstract, we urge you to understand how these ideas have physical implications for the safety and well-being of real students on this campus . Ideas are not merely esoteric concepts; they have historically (and presently) been used to silence and justify extreme violence. William Jacobson’s rhetoric and worldview is an illustrative example of where we locate this violence; this is not “free speech.” This is sanctioned violence hiding behind the veneer of liberalism.

The VSA Executive Board

I may have more on that smear campaign — which appears to be ongoing — and who was behind, it in a later post.

Healing 2 Action organized a series of steps in advance of my appearance that were other-worldly. 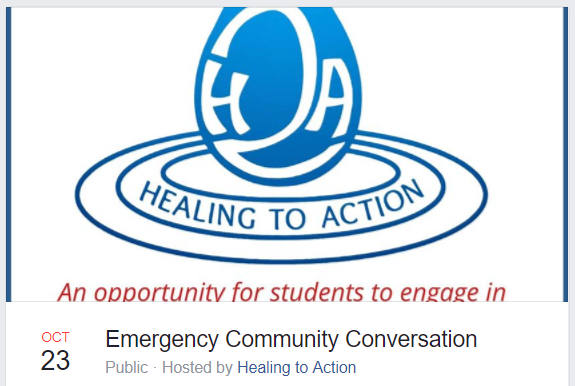 Here was Healing 2 Actions plan for the day of my appearance:

TODAY the lecture formerly titled “Hate Speech is Still Free Speech Even After Charlottesville,” will take place in Rocky 300 at 7pm.

There will be many different ways to heal. Above all, we want to prioritize SAFETY.

H2A does not endorse attendance of this event, but for those who do choose to attend it is essential that safety is prioritized and attendees be mindful of engaging with the speaker in a way that does not put Black, brown, Jewish, queer and trans bodies at risk.

Healing to Action does not endorse violent acts of protest.

SAFETY INFO IF YOU’RE ATTENDING THE LECTURE (6:30pm-9pm)
1. Rocky 304 will function as a safety room if you choose to leave the lecture. There will be a designated student in the room both during and after the lecture.
2. Sit with people who you feel comfortable around.
3. Sit starting from the back seats on either side of the room, filling towards the front without leaving empty seats. This will concentrate non-students towards the front/center and allow students access to the exits.
4. White nationalists are manipulative. While it’s normal to have an emotional response, don’t let yourself be baited; they want to incite “fragile liberals.”
5. Wear all black for solidarity.
6. Know that if you choose to attend, there is the possibility of those in the audience filming and taking photograph
7. If you’re going into the space and you have privilege (i.e. white people), you have a responsibility to look out for and support those who are targets of violence, (i.e. Black, brown, Jewish, queer and trans folk) since Jacobson is not trying to have a dialogue but instead is intentionally using loaded language to rile up students.

SELF CARE
Drink water. Sleep 7-9 hours. Eat when you’re hungry. Shower. Remember to take your medicine if you need it. Your health comes before deadlines! Reach out to people to get what you need.

**We are acting to protect marginalized identities put in the most danger. This includes Jewish people, Black and Brown people, Queer and Trans folk.**

That a significant portion (but not majority) of the Vassar community reacted this way to a right-of-center speaker like me, who had spoken at Vassar previously, truly took me by surprise. I suspect there is something else going on here, but what it is remains to be seen.

Despite all the agitation and hysteria, the event went off without complication. Vassar provided excellent security both for me personally and for the event venue.

The turnout was excellent, approximately 200 students in the room (full capacity) plus overflow in the hallway. The students who attended, even the ones who showed up wearing black in protest, listened intently. I think they were expecting someone and something very different based on the campus hysteria. I addressed the hysteria in my lecture.

After my lecture, we had over an hour-long question and answer session, and almost all the students stayed to the very end. The questions were thoughtful and in many instances quite challenging, the students respectful, and I think we all learned something.

I wish the lecture had not been tarnished by the malicious campus campaign against me.

I hope the student body now realizes it was manipulated by those fanning the flames, and that those people do not have the students’ best interests in mind.

Here’s the lecture part of the event. Unfortunately, I don’t have time to transcribe it. I’ll also try to add the Q&A video later.

I love it when an insufferable bunch of delicate snowflakes proves your point for you.

These are no longer institutions of “higher” learning. Since they are all subsidized by the government, government worship is the only “learning” to be had. Cultural Marxism is their aim and they seem to be succeeding!

Professor, people like you need to continue the good fight by delivering more and more of these lectures. Already cracks have appeared where the Left and colleges have been shamed into letting you and other conservatives speak and in every case the same pattern is followed: A) A build up before the speech to warn students of the horrific things that the speaker is going to say, B) a presentation that is nothing like what the Left has advertised and where the students are intrigued by the non-threatening and nonviolent content, and C) the opening of the eyes of the students to realize that the Left has lied to them time and again starting with their fear tactics concerning the lecture.
>
What we are watching today are shaking this country to the core as one truth bomb after another are being exploded across this nation. Every day it seems we discover how Obama violated the Constitution, lied to the country, or created some action that is against what almost everyone wanted; almost daily we are hearing more sins of the DNC as they paid for the “Trump dossier”, skewed the primaries to Clinton, and so forth; every day now we hear of Hillary Clinton and how the sins she committed that we thought we knew about was only the tip of the iceberg; routinely we hear of how agencies like the DOJ, FBI, IRS, and others routinely lied to the American public and performed illegal acts in an effort to shore up the Democrats in office; and every day we hear of more and more of other supposed Leftist leaders, whether they are Hollywood actors/producers, renown journalists, or others, who railed against misogynists while being one themselves. The country, and college students especially are seeing these truth bombs and are now discovering how most everything told by the Left is a lie fabricated to gain their support through fear. The Left is eating itself alive and dying. Efforts like yours helps this process. Please keep up the good work.

Prof., you should put the Q&A video up as it’s own post. More people will see it!

Vassar has a student newsletter at http://www.miscellanynews.org/category/opinions that has an article about Prof. Jacobson’s talk- ”Banning hate speech ultimately…” where the writer- Andrew Solender writes that ”William A.Jacobson is, in fact, a white supremacist…”. Anyone can leave a comment on that student website. Solender’s article clearly libels W. A. Jacobson as a white supremacist and also states where the slander originated from. Solender presents no proof of this at all. I hope someone who is more eloquent than I am goes to that website and leaves a strong comment.

The first action that I would like to address is the misrepresentation of facts. For this, I would like to clarify the truth of a few claims H2A made about the event for the sake of upholding truth. Firstly, while Professor Jacobson is a conservative and runs a conservative publication called “Legal Insurrection,” it was alleged by some that he is actually a white supremacist. There is no evidence to support this fact, and while some may argue that conservative and white supremacist are one and the same, Jacobson, to my knowledge, has not been accused by anybody besides H2A of harboring racist or white supremacist opinions.

Furthermore, some people alleged that news of the event was shared on white supremacist and neo-Nazi websites and publications. My research found that the news was shared on four sites: Legal Insurrection, VidolAmerica.org, LongRoom. com and VCLU’s own newspaper, Tertium Quids. While some of these sites lean right, none could reasonably be considered white nationalist in the way that the Daily Stormer or the KKK’s website can. The statement that the event has been shared on white nationalist websites is misleading.

Lastly, there is no evidence that I could find to support H2A’s claim that members of national hate groups are likely to come to this event as they did in Charlottesville. The president of VCLU told me that they know of “five people” who are attending and who shall remain confidential.. Besides that, there is no evidence of attendees from the outside community, and claims of any are little more than speculation branching off of the earlier claim that news of the event was shared on white nationalist websites.
http://miscellanynews.org/2017/10/25/opinions/banning-hate-speech-ultimately-hurts-progressive-cause/

Pretty gutsy. The same author, eating his errors. You have to admire that rare event.