Abducted in 2012 while hiking in Afghanistan. 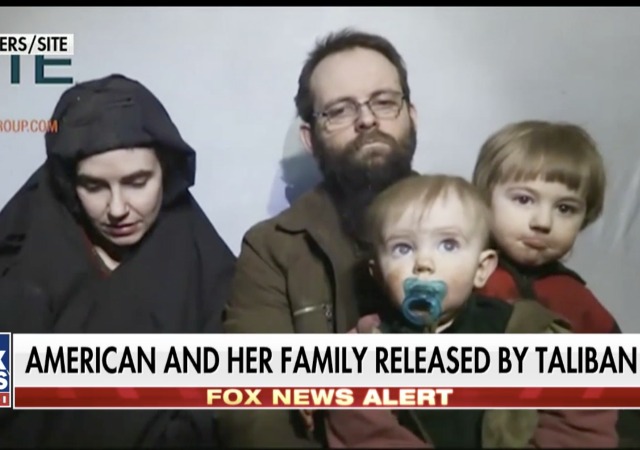 Pakistan officials announced that the Taliban has freed an American woman, her Canadian husband, and their children after five years of imprisonment. From ABC News:

Caitlan Coleman, 31, and her husband Joshua Boyle, 34, who were abducted while hiking in Afghanistan’s Ghazni province in 2012, were secured in an exchange between Pakistani military and U.S. commandos late Wednesday in a secret operation to bring them home after one of the longest — and strangest — American hostage ordeals in recent history, counterterrorism officials revealed.

The captor network was believed by intelligence and counterterrorism officials to have been part of the al-Qaeda-aligned Afghan Haqqani Network — which also held Army Sgt. Bowe Bergdahl prisoner for five years until May 2014 — but no one ever asked the families to pay ransom. The Haqqanis also have close ties to Pakistan’s Inter-Services Intelligence Directorate.

Coleman and Boyle went on a trip in 2012 to visit Russia, Kazakhstan, Tajikistan, Kyrgyzstan, and Afghanistan. Boyle contacted his in-laws on October 8, 2012, from an internet cafe in an “‘unsafe’ part of Afghanistan” as Josh described it.

The Taliban published a “proof of life” video in December 2016 that showed the entire family. Coleman asked President Barack Obama and then-President-elect Donald Trump to intervene, “saying the Taliban ‘are not going to simply release our family easily, because it is correct. They want money, power and friends. … We are told there are Afghans who are prisoners in Kabul that these men care about.'”

She also told the men that her “children have seen their mother defiled.”

Coleman was seven months pregnant when the Taliban took her. She had two more children while in captivity. From CNN:

“The operation by Pakistani forces, based on actionable intelligence from US authorities was successful; all hostages were recovered safe and sound and are being repatriated to the country of their origin,” the statement said. “The success underscores the importance of timely intelligence sharing and Pakistan’s continued commitment towards fighting this menace through cooperation between two forces against a common enemy.”

On Wednesday night, Trump hinted that “something happened today where a country that totally disrespected us called with some very, very important news.” CNN reported:

Trump did not disclose what country or any details involved but said “one of my generals came in and they said, you know, I have to tell you, a year ago they would have never done that.”

Trump and his administration have taken a harder stance against Pakistan to force its official to crackdown on the terrorists that use the country as a safe haven. Secretary of Defense Jim Mattis has chosen to withhold “millions in military funding from Pakistan due to his inability to certify that Islamabad ‘has taken sufficient action against the Haqqani Network,’ a branch of the Afghan Taliban.

The Taliban continue to hold other western hostages including US citizen Kevin King, 60, and Australian citizen Timothy Weeks, 48. Both men were working as teachers at the American University of Afghanistan in Kabul when they were forcibly kidnapped from a vehicle in August 2016.

In September, three administration officials told CNN that US Special Operations Forces from SEAL Team 6 attempted to rescue the two teachers shortly after they were kidnapped but the captives were not at the location the US forces raided.

One other American is believed to be held hostage in Afghanistan or Pakistan: writer Paul Overby, who is in his 70s.

This article is missing a YUUGE part:

Fox News reports that Boyle used to be married to the sister of Omar Khadr, the jihadi who spent 10 years in Gitmo after tossing a greande at US troops that killed a medic.

Upon his release, Boyle refused to be flown to the US. He’s concerned he will be arrested for having terrorist ties.

“Hiking” my a55. This guy and his wife were over there for a lot more thank just “hiking”.