False claims I posed a safety threat incited campus against me for my free speech event.

I’m still trying to get my mind around the Vassar College campus reaction to my planned lecture on “hate speech” and free speech, which I wrote about in Safe Spaces and Safety Teams at Vassar College for My Lecture on Free Speech.

Hundreds of students, faculty and staff were whipped into a frenzy by factually false accusations against me and regarding my appearance. There were many false accusations. In this post, I’ll address just one aspect, that I supposedly posed a threat to campus safety.

The campus was misled into thinking that I, and supposed “neo-Nazis and white supremacists” who were likely to attend with me, were going to target non-white, LGBT and Jewish students. It was a fabrication.

Two campus forums attended by hundreds of people were held by a student group called Healing 2 Action to prepare how to protect the campus from the supposed threat I posed. Among other statements reportedly made at the meeting was the false claim that the “speaker himself is trying to incite violence….” That was a lie without any factual basis.

A document circulated widely on campus after the first of those meetings recites that one of the administrative Deans of Vassar addressed the crowd as follows:

“[name of Dean]: the school/administration has a responsibility to protect us, they intend to do so
○ question: how exactly will they protect us?
○ look at what has happened on other campuses, make a plan that involves Safety
& Security ahead of time”

False claims by Healing 2 Action that event information was shared by me “on multiple white nationalist websites,” and that there was “active encouragement for other white nationalists to come to the event” were spread to thousands of people by the Vassar Student Association, the student government, in an all-student email. The claim was made in that all-student email that there was a need to “protect the people that this speaker has targeted in the past.”

“Safe” events were organized on and off campus to help protect students from me and my supposed supporters. That such events were held at Chabad [*] and the Jewish Student Union was particularly painful for me, considering all I have done to fight anti-Semitism on campuses, including at Vassar.

In addition to asking the Vassar President to cancel my appearance, as quoted in my prior post, the Executive Board of the Vassar Student Association requested that academic deadlines be relaxed because the problems my appearance was causing students were so serious. VSA requested the president:

“Reach out to faculty to make them aware of and acknowledge the pain and emotional toll students are facing right now and will face this week, so that a strict adherence to deadlines on academic work is not an additional and unjust burden on students”

In the run up to my appearance, event posters were placed around campus by the sponsoring group, the Vassar Conservative Libertarian Union. Those posters, consistent with Vassar policy, were approved to be place on bulletin boards, and had the stamp of approval on them.

The posters were torn down almost as soon as they were put up. The demonization was so complete that one of the posters that was not immediately torn down was defaced by putting horns on me. 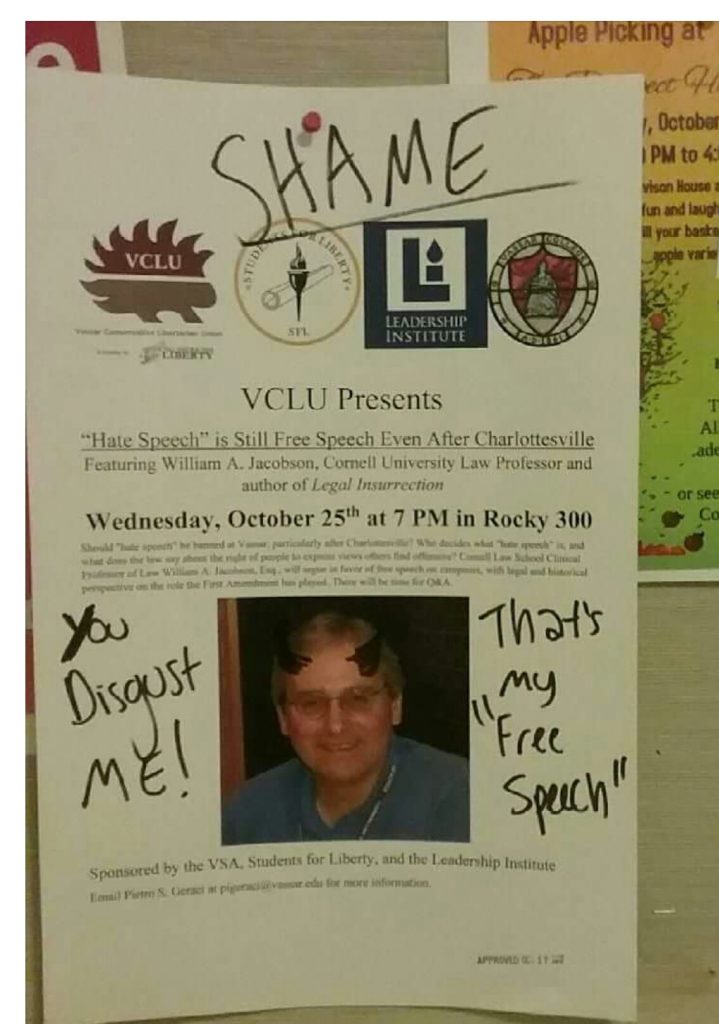 Keep in mind, this campus frenzy intended to portray me as a threat to campus safety (and other things, as well) never was based on reality. It was similar to falsely shouting “fire” in a crowded theater, but even worse, because it falsely blamed a real person (me) for the fictitious fire.

There is a malevolence on the Vassar campus, among a small but potent percentage of the student body, faculty and staff, that the Vassar administration has not come to grips with. Instead, people falsely claiming I posed a threat to campus safety had their baseless reactions recognized as legitimate.

The event as it took place was as it always was intended to be, a serious discussion of the balancing of 1st Amendment free speech and campus inclusivity concerns on private college campuses. There never was any factual basis to claim otherwise, only actual malice.

For those of you who have not yet seen the videos of my speech and the Q&A session, the videos are below.

[* Added 10-30-2017 – Chabad central organization contacted me asserting that the Chabad event, in which students reacting to my presence on campus could go for “Tea, food, couches and lots of love” was not a “safe” event but “is what Chabad does all the time.” You can read the Chabad Facebook post here. I stand by my post.]

I have learned through observing my older brother’s career, first as a union organizer and Communist party member, then as a professor in the California university system, that the Socialist/Communist party is alive and well within the teaching profession. On July 7-8, 2017 many members of the American Socialist and Commmunist parties attended the G20 Summit in Hamberg, Germany. There they met up with several Antifa, al Queda and Muslim Brotherhood groups to organize their planned “march through the institutions” to take place at American universities. Their efforts are funded in large part by George Soros, though I’m certain he’s not the only funder. The outcome of this meeting is what we’ve been witnessing ever since. Many, many members of the teaching profession, at college level and all the way down, support and march with Antifa. A perfect example of this is the Berkeley, CA school district in which several elementary and junior high school level teachers have been arrested for rioting with By All Means Necessary, an organizing member of the Antifa alliance.

This may sound crazy to you, but I assure you it’s not. The eradication of free speech within the universities is direct action by revolutionary Communist subversives and their Socialist fellow travelers. These people take Gramsci’s call to corrupt the institutions from within very much to heart. The kids involved are unfortunately being propagandized and taken for a very expensive ride. This is not coming from the students, Mr. Jacobson. This is coming from the professors and the administration. These people are wealthy and safe in union protected and/or tenured positions and feel free to disrupt. How will we change this? Stop sending your kids to schools that won’t respect their freedoms for a start. As a follow-up, publicly shame and ridicule them out of their cushy jobs. They’re a menace.