UK study confirms what we knew: Strong link between anti-Israel and antisemitic views

UK study confirms what we knew: Strong link between anti-Israel and antisemitic views 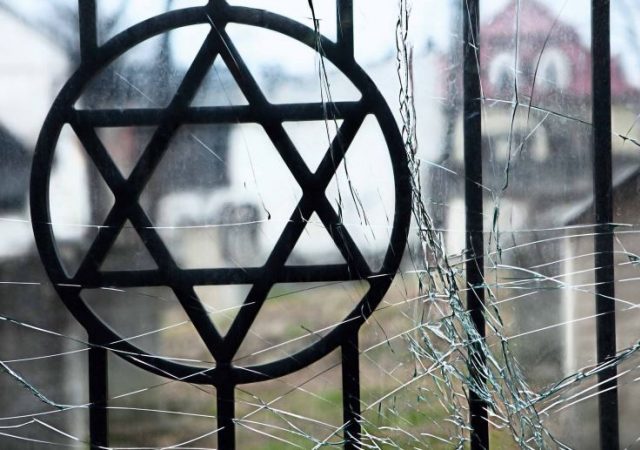 A joint report released last week by the Institute of Jewish Policy Research (JPR), a London-based think tank, and the Community Security Trust (CST), the communal Jewish defense body in the UK, found an “unambiguous association” between antisemitic and anti-Israel attitudes in Britain.

The report—an in-depth investigation and analysis of animus toward Jews, the role of hatred directed toward Israel, and the prevalence of bigotry across the political spectrum in Britain today—makes for a sobering read.

It’s the first major study of British attitudes to demonstrate with “pure, hard empiricism” what many Jews and others have been saying for a long time, namely the fact that there’s a tight empirical connection between a hatred of Israel and a hatred of Jews. 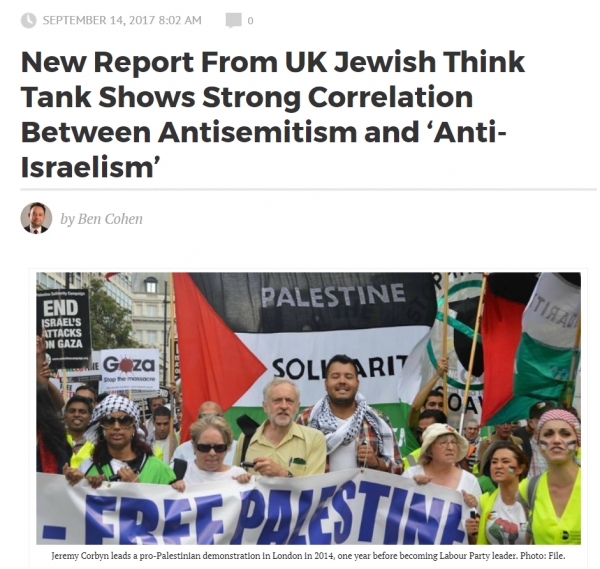 The JPR and CST presented their new report this week claiming it to be the “largest and most detailed survey of attitudes towards Jews and Israel ever conducted” in the UK. The 82 page study, which also includes dozens of tables and figures, is well-worth the time to read (for brief summaries of the report see here and here). 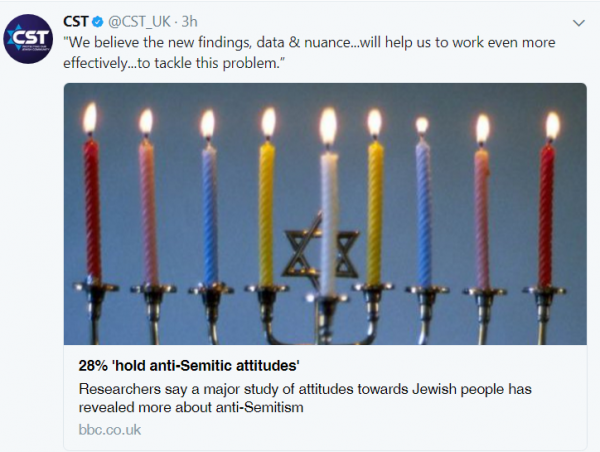 The document is a painstakingly-researched and careful assessment of British public opinion about Jews and Israel, specifically addressing the question of the relationship between antisemitism and anti-Israel sentiment. 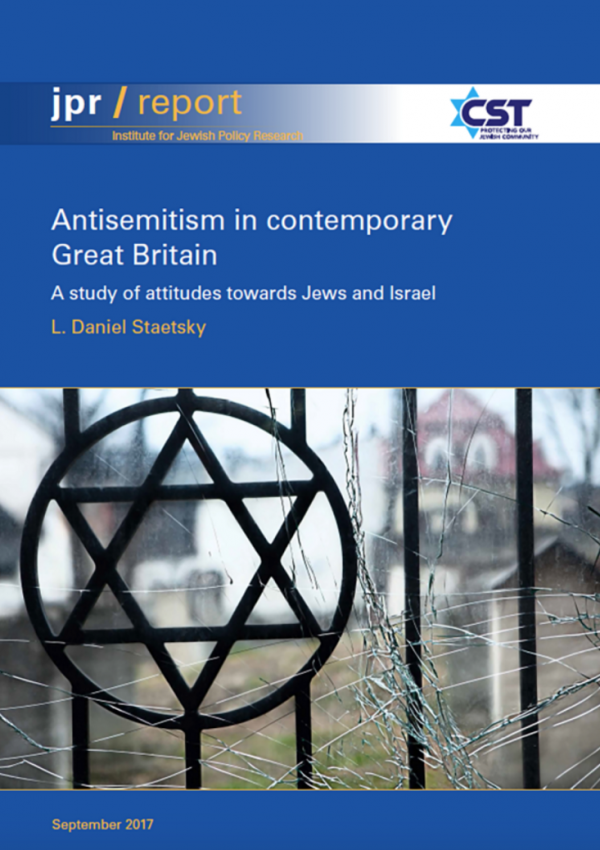 There’s some good news that comes out of it.

Despite the fact that antisemitic hate crimes and attacks in the UK have reached record highs, the study finds that British Jews constitute a minority group that is viewed overwhelmingly positively by an absolute majority—about 70% of Britons have a favorable opinion of Jews and entertain no antisemitic ideas or views whatsoever. 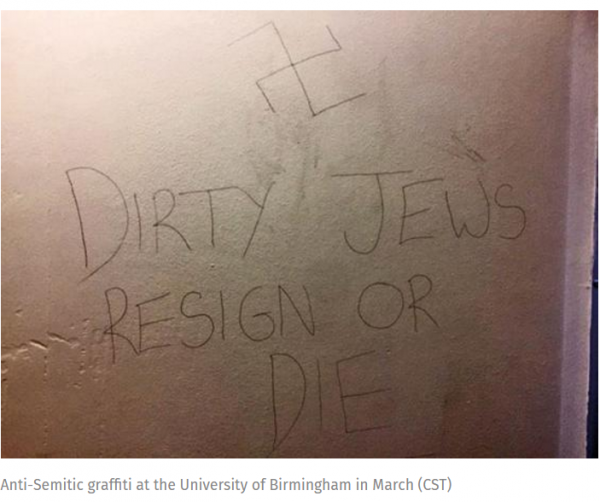 In fact, the study revealed that only about 5 percent of the general British population can be “reasonably and justifiably described” as hardcore antisemites—people who hold a wide range of negative and stereotypical attitudes toward Jews. In addition, only 1% of British society believes that violence is “often” justified against Jews (a further 3% believe that it is “sometimes” justified). The same results were also reported for any justification of violence against Zionists or Israelis. 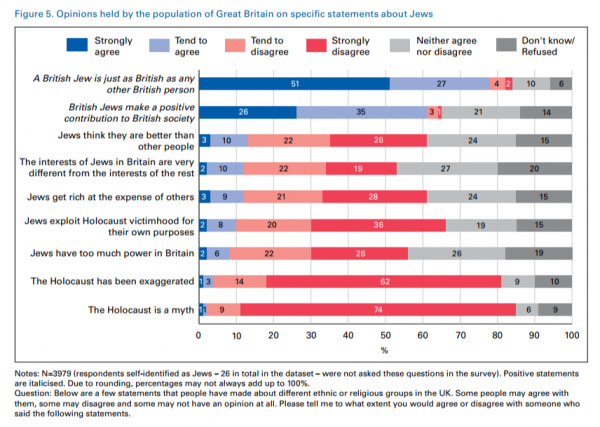 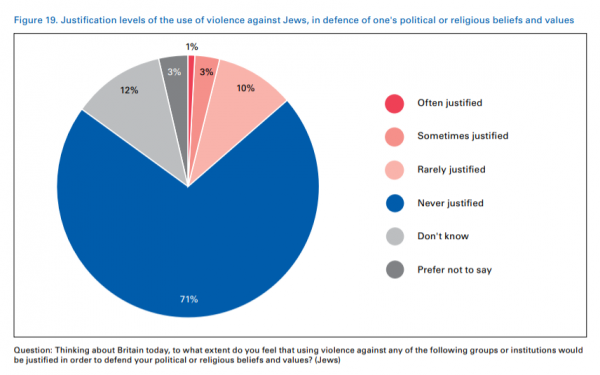 Additionally, the survey results showed that the “most extreme fringe” of far-right and far-left animus toward Israel and Jews is rejected by the vast majority of Britons. Only 6 percent of people disagreed with the idea that the State of Israel has a right to exist—roughly in the same ball park as the 4 percent of people who said that the Holocaust never happened or was exaggerated.

Those are the upbeat findings. The rest aren’t nearly as comforting.

While only a “small group” exhibit “strong and sophisticated antisemitism”, with an open dislike of Jews, about 30 percent of people in Great Britain agree with at least one of the antisemitic tropes about Jewish power and money presented to them in the survey. According to lead researcher L. Daniel Staetsky:

This means that antisemitic ideas are not as marginal in Great Britain as some measures of antisemitism suggest…The motivation of those expressing such views may well be benign, and in many instances they may not even realise that a particular comment or remark might be experienced by Jews as offensive, upsetting or simply uncomfortable. Nevertheless, Jewish people can (and do) encounter these views relatively frequently, which naturally affects their perceptions, sense of comfort and safety, and, ultimately, their quality of life…Antisemitism in Britain today is about much more than simply what happens at the fringes of society.”

With regard to measures of ‘anti-Israelism”, the study found that 12% of people in Britain hold many anti-Israel attitudes and could be described as having a ‘hard core negativity’ towards the Jewish state (a further 21% endorse fewer, but still multiple, anti-Israel opinions—often couched in less specific and certain terms. Overall, 56% of Brits hold at least one anti-Israel attitude). 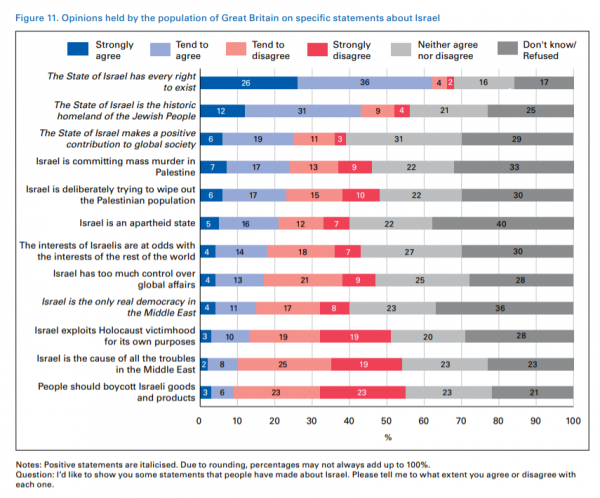 But what’s most significant is the “pattern” that the survey revealed between these antisemitic and anti-Israel attitudes: the stronger a person’s anti-Israel views, the more likely they are to also harbor antisemitic attitudes.

So 86% of Britons who don’t hold any anti-Israel attitudes don’t harbor any antisemitic ones either. But among those holding a large number of anti-Israel views, only 26% don’t express antisemitic attitudes. 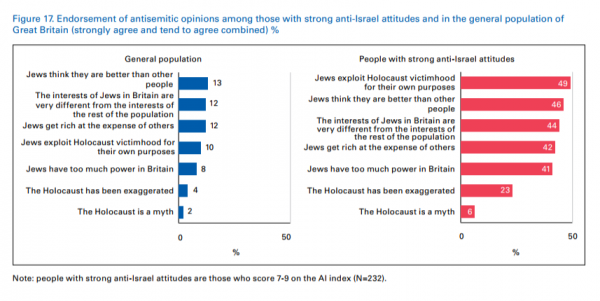 Another way to put it is that among the UK population as a whole, there’s a three in ten chance that a person selected randomly would hold some level of anti-Jewish sentiment. Among those who have no antipathy towards Israel, this would drop to just over one in ten. But among those who hold the strongest of anti-Israel views, the possibility of harboring a hatred of Jews climbs to over seven in ten!

Thus, according to the study’s lead researcher,

3. The “Ugly” – Strong Antisemitism among Muslims

The findings from Muslim respondents are also particularly worrying. The study found levels of antisemitism and anti-Israelism to be 2 to 4 times higher among the UK’s Muslim population than among the population in general.

Those Muslims who identified as religious were more likely among British Muslims to hold anti-Jewish or anti-Israel attitudes (however, on a somewhat positive side, the study found that “significant proportions” of Muslims reject all such prejudice; for example, as noted in the Figure below, 61 percent of Muslims, whether religious or not, agree with the statement that “A British Jew is just as British as any other person”—a “dismayingly modest response” but infinitely better than the pathetic 37 percent who apparently don’t agree): 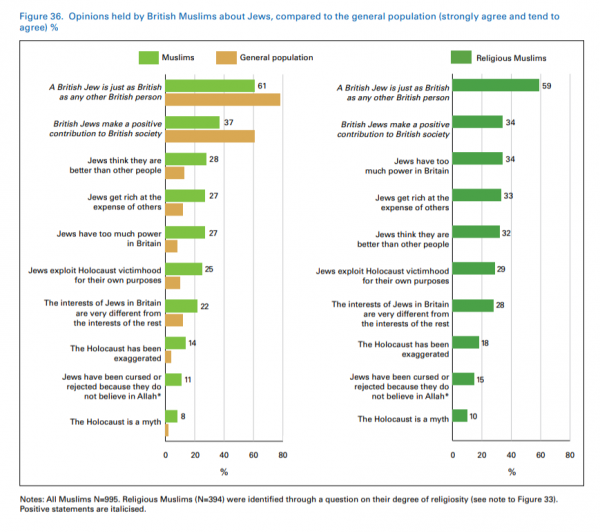 The study found that the most antisemitic group on the political spectrum consisted of those who self-identified as far-right (2 to 4 times higher compared with the general population, and similar to the levels found among Muslim respondents).

That’s not in the least bit surprising. But what the data demonstrates about the left-wing of the political spectrum will no doubt come as a shocker to many Britons, if not to British Jews.

Here, the survey found that all respondents on the left exhibited higher levels of anti-Israelism than average. What’s more, the study reveals that the “left is just as antisemitic as the rest of society—no more, and crucially, no less.” That is, the proportion of “fully-formed, conscious antisemites” is about the same as in the wider society—some 3 to 4%. And around 30% of people who identify on the left also hold at least one antisemitic attitude, just like British society as a whole.

As the CST’s Dave Rich noted during the event to launch the report last week,

…the idea we sometimes hear in defence of the Labour Party when antisemitism is raised, that the left, or the Labour Party, is a pure anti-racist space where antisemitism can’t happen, is shown to be completely untrue. It is as easy to find antisemitism there as it is anywhere else. When Jewish people complain that they have heard antisemitic comments from people on the left, or seen Labour party supporters or members posting antisemitic memes on social media, this isn’t a Blairite plot to undermine Jeremy Corbyn or a Zionist trick to silence critics of Israel—it’s real, they are telling the truth and should be taken seriously.” 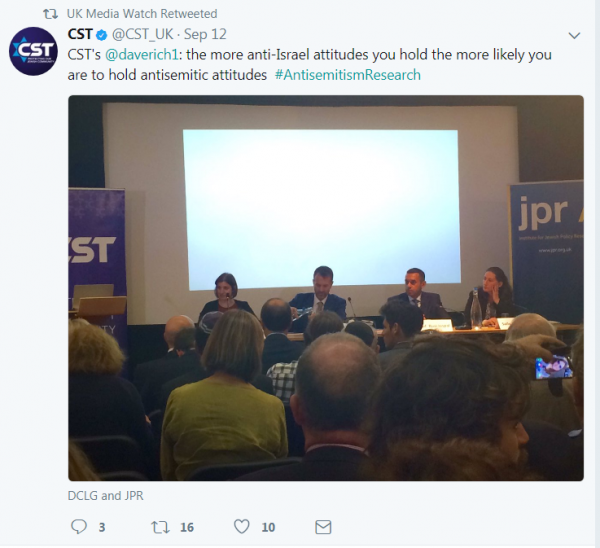 It’s a fair critique based on the data: the study shows that antisemitism is linked to anti-Israel attitudes because the more anti-Israel people are, the higher the chances are that they will also despise Jews in some way—and the left as a whole is a lot more anti-Israel than is the general UK population.

For more on antisemitism on the British left, see “Whitewashed” (embed below). Released this past June, it’s a powerful documentary about the rise of Jew-hatred in the Labour Party under the leadership of Jeremy Corbyn:

Several months ago, the pro-Israel author and blogger David Collier released a 160+ page report based on several years of his investigating the social media of activists affiliated with the Scottish Palestine Solidarity Campaign (SPSC).

Collier focused on the SPSC leadership and participants in the group who routinely showed up for anti-Israel demonstrations, manned the SPSC stalls and booths in town centers, and posted images of their protests on Facebook.

But what Collier found in their social media postings wasn’t just virulently anti-Israel statements like those tested for in the new JPR/CST report (e.g., Israel should be boycotted and treated as a pariah, outlaw apartheid state committing mass murder against defenseless Palestinians). Instead, Collier found these SPSC activists routinely engaging in the production and dissemination of vile antisemitic material and trafficking in disgusting anti-Jewish tropes. 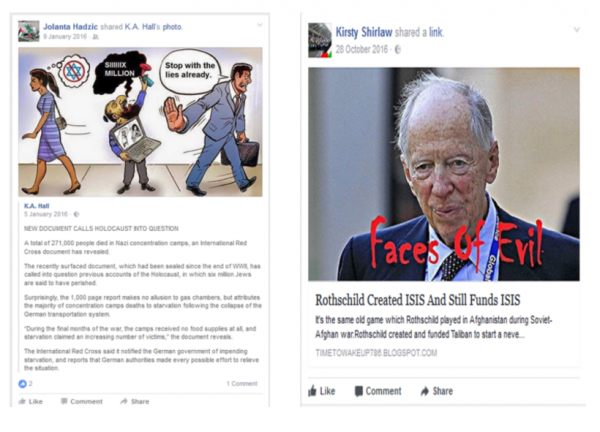 Basically, the new study on “Antisemitism in contemporary Great Britain” corroborates Collier’s findings about one specific anti-Israel group—but on a much larger scale. It shows that people who hold vehemently anti-Israel views are far more likely to express explicitly antisemitic ones, compared to those who are neutral on the Israeli-Palestinian conflict.

Bottom line: People who obsessively criticize Israel, see it as the source for all the Middle East’s problems, and rant 24/7 about Israeli apartheid and its genocidal war crimes may only have a problem with Israel. But there’s a very good chance that they also have a problem with Jews.

“The enemy of my enemy is my friend.”

which also includes JINOs
and the results of mixed attachments.
they all have a deth wish alongside the death cultists.

I’m amazed it required a study to identify a connection between hating Jews and hating Israel.

Well, when your typical leftist is smarter than everyone else on the whole planet, it takes a study.

Odd study. The conclusions are not unexpected, but they are weak in my mind for the apparent intended purpose, which seems to be to label any critic of Israel as a likely antisemite.

The finding that antisemitism is most likely to be found on the Right side of the political spectrum makes me wonder how the researchers are defining Left and Right. It was an ingenious bit of Nazi propaganda to label authoritarian nationalists (ie, fascists) as being Right wing to differentiate themselves from the authoritarian internationalists (ie, communists) of the Left wing, but nationalistic socialism is also a Left-wing ideology. After WWII, communists and their Western academic sympathizers continued this false labeling in the hope of contrasting communism with the consensus evil of Nazism. I find it hard to understand how someone can sit thru eight years of Obamunism and not appreciate the amount of antisemitism emanating from the Left.

I don’t believe this. Many anti-zionists deny being antisemites, but they’re not being honest with themselves, let alone with others.