Sanders to Hillary: “Our Job is to Go Forward”

Sanders to Hillary: “Our Job is to Go Forward”

Get over it, Hillary 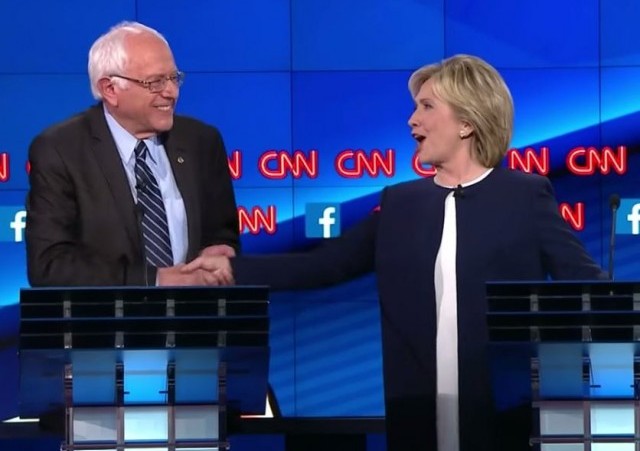 Sanders told The Hill that it’s time to move forward.

“My response is that right now it’s appropriate to look forward and not backward,” Sanders told The Hill.

“I’m working overtime now to see we overturn Trump’s decision on DACA, pass a $15-an-hour minimum wage and next week I’ll be offering a Medicare-for-all single-payer system,” he said.

Sanders said he wants to focus on the legislative challenges at hand and not debate who is to blame for President Trump’s stunning electoral upset of Clinton in November.

In her memoir, Hillary complained that Sanders reverted to attacking her because the two agreed on policy and this led to his supporters also attacking her. She claimed that his supporters harassed her supporters online, which “got ugly and more than a little sexist.” She wanted to fight back, but no one let her, including President Barack Obama.

According to Hillary, those attacks “caused lasting damage, making it harder to unify progressives in the general election and paving the way for Trump’s ‘Crooked Hillary’ campaign.”

Earlier this week Hillary endorsed the website Verrit, which claims its for the 65 million people who voted for Hillary. Gizmodo explained that the site allows the users to place text on social media cards, which “come with a seven-digit authentication code which can be verified on the website, supposedly ensuring social media users will be able to check to see the information contained within is accurate.”

Verrit was set up by Peter and Leela Daou. Peter Daou is a former Clinton adviser who has been incredibly vocal on Twitter since the election. After Clinton’s endorsement, Daou explained what Verrit is and who its audience is, saying that “Hillary Clinton’s voters… are unrepresented in the media” ….

But as Professor Jacobson stated, “HILLARY SUPPORTERS WERE THE MEDIA!”

‘“Our Job is to Go Forward into the Dust Bin of History.’”

There! Fixed it for them!

Hillary clinton’s job is to die – broke, and indicted.

1
notamemberofanyorganizedpolicital in reply to TheFineReport.com. | September 7, 2017 at 10:56 am