No, the bill is not dead yet. 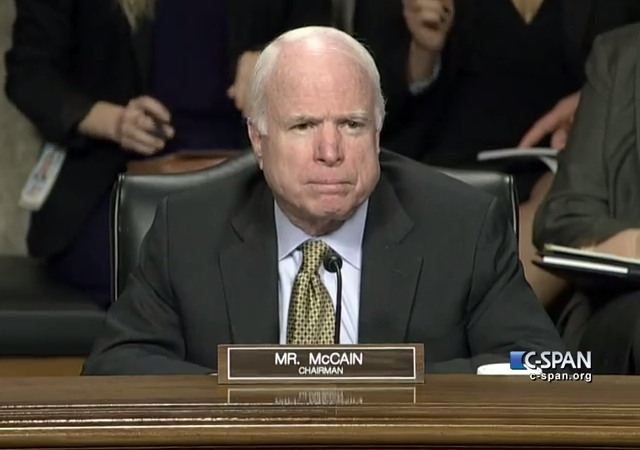 Sen. John McCain (R-AZ) officially decided he will vote no on the Graham-Cassidy bill, which is the latest attempt the GOP has taken to repeal and replace Obamacare. From CNN:

“I cannot in good conscience vote for the Graham-Cassidy proposal,” the Arizona Republican said in a statement. “I believe we could do better working together, Republicans and Democrats, and have not yet really tried. Nor could I support it without knowing how much it will cost, how it will effect insurance premiums, and how many people will be helped or hurt by it. Without a full CBO score, which won’t be available by the end of the month, we won’t have reliable answers to any of those questions.”

But this does not mean the bill is officially dead. The Republicans can only afford two defectors, which they have reached: McCain and Sen. Rand Paul (R-KY). Paul called out the bill on Twitter last week, calling it Obamacare Lite. He also said that he “won’t be bribed or bullied” into voting for a bill “that KEEPS most of Obamacare.” From Politico:

“Rand Paul, or whoever votes against Hcare Bill, will forever (future political campaigns) be known as ‘the Republican who saved Obamacare,’” Trump warned.

Paul responded in kind, tweeting that “no one is more opposed to Obamacare than I am” but asserting, “The current bill isn’t repeal.”

“I won’t vote for Obamacare Lite that keeps 90% of the taxes & spending just so some people can claim credit for something that didn’t happen,” Paul said.

Reports have said that Sen. Susan Collins (R-ME) “is also to vote no on the proposal.” CNN continued:

It’s unlikely considering the fact that Collins said Friday afternoon that she was leaning against the bill and had key concerns that the legislation did not do enough to protect individuals with pre-existing conditions.

“I’m leaning against the bill,” Collins said Friday at a Portland, Maine, event, according to The Portland Press Herald.

But if she votes yes then it’s at 50-50, which means Vice President Mike Pence can come in and cast his vote as the tiebreak.

Kemberlee blogged last week that Senate Majority Leader Mitch McConnell (R-KY) said he would bring the bill to the floor this week if he had the votes to pass it.

Paul also said that the bill only redistributes money and does not actually repeal. He may have a point. From The Washington Times:

Under the plan, Obamacare money that pays for an expansion of Medicaid and that subsidizes coverage for many of those who buy insurance on the exchanges would be pooled and instead given to states as block grants. The states would then tailor the money to their own health care plans.

The bill would immediately repeal Obamacare’s individual mandate requiring people to get covered or pay a tax and its rule requiring large employers to provide coverage or face crippling penalties. It also scraps the 2010 law’s tax on medical device sales.

McCain (L-AZ) cannot get over being butthurt by Trump. After all the times he fought against conservatives he’ll finally show his true colors and switch to democrat.

The lesson learned during 2017 is that if you were expecting Republicans to save you from the disastrous policies of the Obama administration, you were gravely misinformed. It seems only Trump has the balls and the will to tackle those calamities. There are a few good ones in Congress but they are outnumbered by the RINOs/Dems.

John McCain, Mitch McConnell and a large stray dog walk into a bar.

McConnells says: “And it’s not with us.”

The barman says: “What dog? I am talking to you two rats.”

In the winter while at the senate, McConnell, McCain and Schumer are talking, when the sergeant at arms walks up to McConnell and says: “There’s a pig outside, and it’s freezing. It’s trying to get inside the Senate building.”

“But it stinks!” McCain says.

Schumer says, “Don’t worry, he’ll get used to the odor.”