The White House also wants the Kurds to cancel the vote 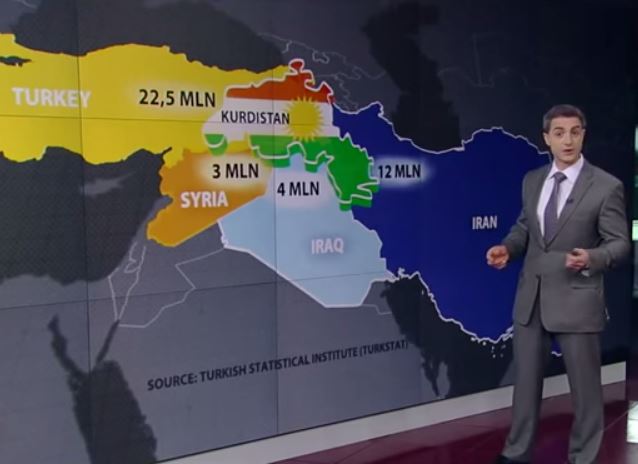 The Kurds have been working toward an independent Kurdish state for many years, and they will finally vote on their independence on September 25, 2017.

While the Palestinian agenda has dominated every international forum, the much more populous and ethnically distinct Kurds have been mostly ignored.  In part, this is because the Kurds span several nation states created by colonial powers after the implosion of the Ottomon Empire.  Turkey particularly has threatened war if a Kurdish nation emerges.

In part it is because creating an independent Kurdistan does do not serve a political purpose of snuffing out the only Jewish state in the region.

The parliament of Iraq’s autonomous Kurdistan region has approved a plan to hold a referendum on independence on September 25th.

Parliament reconvened in Erbil, the seat of the Kurdistan Regional Government (KRG) in northern Iraq.

An overwhelming majority of the Kurdish lawmakers taking part backed the plan.

Some lawmakers wore Kurdish flags and rose to clap and sing the national anthem after the vote.

The only non-Kurdish flag at rally going on now in #Erbil. Israel the sole country to support independence referendum pic.twitter.com/MMGxTsOrLN

Citing concerns about continued efforts against ISIS, President Trump’s administration—like Obama’s before him—does not support an independent Kurdish state.  The Trump administration has demanded that the Kurds cancel their independence referendum in favor of further negotiations.

The Trump administration demanded in unusually strong terms Friday that Kurdish leaders in Iraq cancel a referendum on independence set for later this month, saying it was “distracting” from the military effort against Islamic State terrorists.

The White House statement came hours after the parliament of Iraqi Kurdistan voted to go ahead with the referendum. The developments are the latest in an intensifying campaign, some of it waged on Capitol Hill, over whether the Kurds should hold the vote. It’s an especially sensitive issue because the Kurds are critical U.S. allies in the anti-terrorism fight in Iraq and Syria, providing ground troops that have scored numerous successes.

“The United States does not support the Kurdistan Regional Government’s intention to hold a referendum later this month,” White House press secretary Sarah Huckabee Sanders said Friday. “The United States has repeatedly emphasized to the leaders of the Kurdistan Regional Government that the referendum is distracting from efforts to defeat [the Islamic State] and stabilize the liberated areas.”

The Sept. 25 referendum is advisory — meaning Iraqi Kurds will vote on whether they support creating an independent Kurdish state, giving their leaders a mandate to start negotiating an exit. It is expected to result in a “yes” for independence.

The New York Post has more on the Trump administration’s stance against pursuing a free and independent Kurdistan at this time:

So why has the US been going all out to stop the Kurds from voting? On Friday, a White House statement flatly demanded the referendum be called off.

It boils down to a fear that Kurdish independence would be a distraction from the war on ISIS. The Kurdish Peshmerga troops have been the most effective land force in the Western-led push to destroy the Islamic State.

That fight is finally succeeding. But since Turkey, Iran and especially the government of Iraq bitterly oppose Kurdish independence, the US has treated the referendum as a threat to a successful conclusion to the campaign against the terrorists.

That’s why Secretary of Defense James Mattis has asked the Kurds to delay their vote for independence. Other US officials are also working to pressure them to once again put off their hopes.

. . . .  Turkey, Iran and the Shia-dominated government of Iraq have a common interest in repressing Kurdish hopes for independence. That’s why seeking to put off the Kurds with vague promises about the future won’t work.

Instead of pledging to keep an Iranian-dominated Iraq united, Trump needs to seize this chance to put Tehran on the defensive on one front, while also pushing hard to roll back the nuclear deal and curbing their terror and missile outrages.

The only thing that surprises me is that the Kurds waited this long.

When I was in Iraq I actually traveled between Iraq and Kudistan a few times dealing with contractors.

It was kind of funny to me. The Iraqis acted blatantly arrogant and superior to the Kurds, but the Kurds were the ones that actually had their shit together. They had modern, relatively well trained and maintained facilities and personnel, and the Iraqis were a shitshow of run-down, corrupt and incompetent leadership.

The day Turkey screwed W Bush on the Iraq invasion, I said he should retaliate by publicly supporting a Kurdish state in the Kurdish parts of Iraq, pointedly without demanding that it renounce territorial claims on Turkey.

The one good idea Joe Biden had was to partition Iraq. There’s no good reason that country should exist, and we could have gained a Shi’ite ally to set up against Iran.