The era of kangaroo courts on campus may be over. 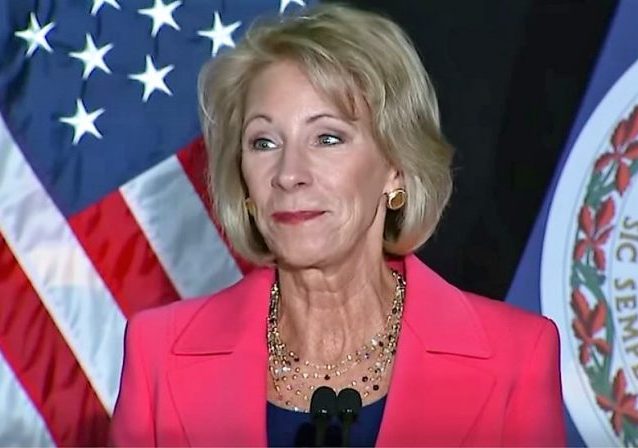 We previously reported on Education Secretary Betsy DeVos’s major policy speech in which she promised a departure from the Obama-era guidance on how universities and colleges must handle sexual assault cases. That guidance has resulted in a substantial lack of basic due process for accused students in a process fairly described as “kangaroo courts.”

Another aspect of that lack of due process was equally explosive but only now is gaining recognition – the possibly discriminatory impact on black males. This has been the subject of articles in The Atlantic and Reason, as well as a recently released research paper.

The Trump administration on Friday scrapped Obama-era guidance on investigating campus sexual assault, replacing it with new interim instructions allowing universities to decide which standard of evidence to use when handling complaints.

Education Secretary Betsy DeVos has said the Obama rules were unfairly skewed against the students accused of assault.

“This interim guidance will help schools as they work to combat sexual misconduct and will treat all students fairly,” DeVos said in a statement.

“Schools must continue to confront these horrific crimes and behaviors head-on. There will be no more sweeping them under the rug. But the process also must be fair and impartial, giving everyone more confidence in its outcomes,” she said.

DeVos’ temporary guidance allows colleges the freedom to decide which standards of evidence they want to use when investigating complaints of sexual assault. Under Obama’s instructions from 2011 and 2014, colleges were told to use “the preponderance of the evidence” standards, while DeVos lets colleges choose between that standard and “the clear and convincing evidence standard,” which is harder to meet.

The temporary guidance will be in place while the Education Department gathers comments and comes up with new rules.

The temporary guidance is in the form of a question and answer document on the Education Department website (full embed at bottom of this post): 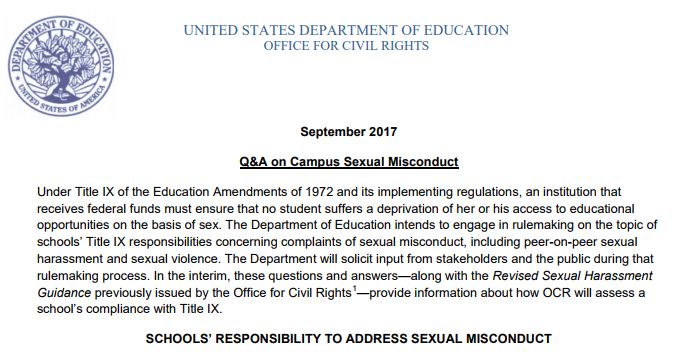 Question 6 is the part that goes to investigatory practices (emphasis added):

Question 6: What constitutes an “equitable” investigation?

In every investigation conducted under the school’s grievance procedures, the burden is on the school—not on the parties—to gather sufficient evidence to reach a fair, impartial determination as to whether sexual misconduct has occurred and, if so, whether a hostile environment has been created that must be redressed. A person free of actual or reasonably perceived conflicts of interest and biases for or against any party must lead the investigation on behalf of the school. Schools should ensure that institutional interests do not interfere with the impartiality of the investigation.

An equitable investigation of a Title IX complaint requires a trained investigator to analyze and document the available evidence to support reliable decisions, objectively evaluate the credibility of parties and witnesses, synthesize all available evidence—including both inculpatory and exculpatory evidence—and take into account the unique and complex circumstances of each case.14

Any rights or opportunities that a school makes available to one party during the investigation should be made available to the other party on equal terms.15 Restricting the ability of either party to discuss the investigation
(e.g., through “gag orders”) is likely to deprive the parties of the ability to obtain and present evidence or otherwise to defend their interests and therefore is likely inequitable. Training materials or investigative techniques and approaches that apply sex stereotypes or generalizations may violate Title IX and should be avoided so that the investigation proceeds objectively and impartially.16

Once it decides to open an investigation that may lead to disciplinary action against the responding party, a school should provide written notice to the responding party of the allegations constituting a potential violation of the school’s sexual misconduct policy, including sufficient details and with sufficient time to prepare a response before any initial interview. Sufficient details include the identities of the parties involved, the specific section of the code of conduct allegedly violated, the precise conduct allegedly constituting the potential violation, and the date and location of the alleged incident.17 Each party should receive written notice in advance of any interview or hearing with sufficient time to prepare for meaningful participation. The investigation should result in a written report summarizing the relevant exculpatory and inculpatory evidence. The reporting and responding parties and appropriate officials must have timely and equal access to any information that will be used during informal and formal disciplinary meetings and hearings.18

Question 8: What procedures should a school follow to adjudicate a finding of responsibility for sexual misconduct?

The investigator(s), or separate decision-maker(s), with or without a hearing, must make findings of fact and conclusions as to whether the facts support a finding of responsibility for violation of the school’s sexual misconduct policy. If the complaint presented more than a single allegation of misconduct, a decision should be reached separately as to each allegation of misconduct. The findings of fact and conclusions should be reached by applying either a preponderance of the evidence standard or a clear and convincing evidence standard.19

The decision-maker(s) must offer each party the same meaningful access to any information that will be used during informal and formal disciplinary meetings and hearings, including the investigation report.20 The parties should have the opportunity to respond to the report in writing in advance of the decision of responsibility and/or at a live hearing to decide responsibility.

Any process made available to one party in the adjudication procedure should be made equally available to the other party (for example, the right to have an attorney or other advisor present and/or participate in an interview or hearing; the right to cross-examine parties and witnesses or to submit questions to be asked of parties and witnesses).21 When resolving allegations of dating violence, domestic violence, sexual assault, or stalking, a postsecondary institution must “[p]rovide the accuser and the accused with the same opportunities to have others present during any institutional disciplinary proceeding, including the opportunity to be accompanied to any related meeting or proceeding by the advisor of their choice.”22 In such disciplinary proceedings and any related meetings, the institution may “[n]ot limit the choice of advisor or presence for either the accuser or the accused” but “may establish restrictions regarding the extent to which the advisor may participate in the proceedings.”23

Schools are cautioned to avoid conflicts of interest and biases in the adjudicatory process and to prevent institutional interests from interfering with the impartiality of the adjudication. Decision-making techniques or approaches that apply sex stereotypes or generalizations may violate Title IX and should be avoided so that the adjudication proceeds objectively and impartially

These are only interim steps. Schools still can choose the lower preponderance of the evidence standard, but they are not required to do so as under the Obama guidance. In a footnote DOE makes clear that a school cannot pick a different standard for sexual assault cases:

The interim guidance also seeks to inject a semblance of balance and due process.

This will not halt the current abuses, but it’s a step in the right direction. Convicting or punishing innocent people (usually men) or allowing the process to be abused for other motives, does not advance the real victims of sexual assault.

(added) Ashe Schow, who has covered this issue as closely as anyone, is pessimistic that any changes will change the campus culture that developed under Obama. She writes at The Federalist:

Even with the older guidance, opponents of DeVos (who, honestly, would oppose anything that didn’t strengthen the dangerous mantra of “always believe the accuser”), should know that they have won the culture war over sexual assault on college campuses. In the years since the Obama guidance was posted, activists—along with the media and legislators—have succeeded in expanding the definition of sexual assault.

Now, essentially, if a woman says she was raped, she was raped. Drunken hookups are now rape, even if both parties were equally drunk. Regretted sex is now rape, because, in the words of one activist, students “need some time to reflect” before deciding to make an accusation. There is virtually no way for a student—especially a male student—to have consensual sex on campuses, because if the other person claims it wasn’t consensual, that’s all a school needs because they want to show they take sexual assault seriously.

The reactions have been predictable:

1 in 5 women will be sexually assaulted on a college campus. DeVos rescinding survivor protections is a slap in the face to them. #StopBetsy

This is not just a betrayal of the victims of campus sexual assault- it also discourages future victims from coming forward & seeking help.

As I mentioned over at Instapundit, and has been since partially confirmed by Ashe Schowe, there is a grievance infrastructure that supports Obama’s Title IX interpretation. They may have even prompted his administration to issue the “dear colleague” letter to that end.

They are financially invested in this scheme, and many are ideologically invested as well. Thousands of people’s jobs depend on this travesty continuing, so any changes to the policy will be resisted.

Like Jim Crowe, this will not go away on its own. It must be hunted down and killed with fire. Just wait and see.

We’ll see, but I am hopeful. I can see that if business as usual continues, this guidance provides opportunities for aggrieved boys to sue the schools for reinstatement or big bucks. The schools are forbidden to favor girls over boys (or vice versa) in very clear language.

One of those SJW bureaucrats is likely to slip if they put the boy thru their process and give him grounds for a nice juicy lawsuit.

Several people missed this, so I am summarizing what this guidance does. You aren’t appreciating how good it is. I really don’t see how the garbage can continue any longer.

And students previously thrown out of school under previous flawed guidance probably have new weapons in court now — would appreciate a competent legal view on this point.

This guidance does two things:

(2) forbids sexual stereotyping. “Women are to be believed” doesn’t fly any more. Explicitly forbidden in clear language repeated several places in the document. The bureaucracy cannot be pro-woman any more. It has to be sex-neutral.

And another thing it does, which may be different from the old guidance

(3) allows the students to reach an agreement between themselves and the school is then permitted to drop the case.

Schools used to continue these cases and expel the boy even when the girl was telling them not to, so I suspect the guidance said before that they were not supposed to drop the case if they found factual basis (by preponderance standard) for the allegations.

Not an issue for a campus anyways….this is still not due process under the law as college campuses are not equipped or appropriate jurisdictions for investigation, trial, verdict, and sentencing.