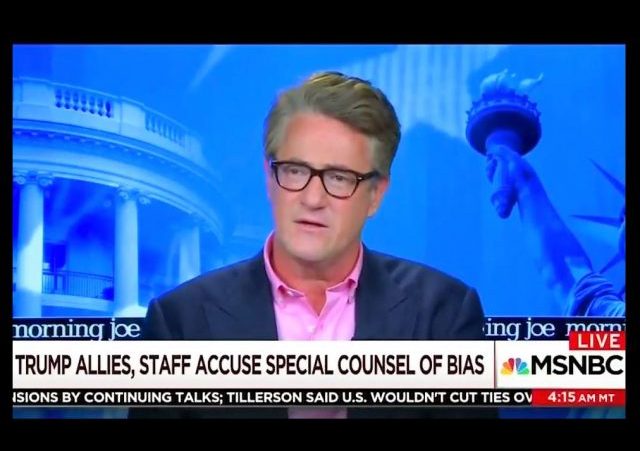 On today’s Morning Joe, Joe Scarborough said that presidential counselor Kellyanne Conway is “so stupid” that it “makes my teeth hurt.” Scarborough, presumably seeking to cover his tracks, then revised his remark to say “not her, but the words that come out of her mouth,” a distinction with no real difference.

Conway had noted the donations to Democrats including Hillary Clinton made by Robert Mueller and several lawyers he has appointed to his investigative team.

Scarborough’s point was that those donations don’t equal the donations made to Dems by President Trump himself and by his former communications director Anthony Scaramucci.

But there is a huge difference that Scarborough ignores. Donald Trump is not prosecuting Robert Mueller or his team. That team has an obligation, as prosecutors, to avoid both actual and perceived conflicts and bias.

Note: It’s not surprising that Scarborough would criticize Conway in such insulting terms. Back in February, Mika Brzezinski issued a fatwa barring Kellyanne from the show. If Morning Joe is going to attack Conway so harshly, wouldn’t it be fair to invite her on the show to respond and defend herself?

Say it about any liberal female and you’re burned at the stake…must be nice to have those protections in the beltway media mafia.

Honestly, what did we gain by giving this backstabbing moron attention? Nothing, I can think of.

I understand that you don’t like what he says. But what makes him a backstabber? That he used to be a republican? I guess you would sympathize with Muslims who consider it a capital offense to change religions.

What do you think about someone who used to support choice and gave to Planned Parenthood, but ran for office in opposition to them? Did he just see the light or is he a backstabber, too?

So what exactly does Joe think he’s saying here? Person A donates to something, and person B donates to the same something, but B’s donation is bigger than A’s, so … A’s donation doesn’t count?

Kellyane Conway is the first woman to run a presidential campaign, and she pulled off the most stunning upset in history of American politics.

Her name should be on every girl’s lips as an inspiration of what women are capable of. Instead, the Left demonizes her.

Fen’s Law – the Left doesn’t really believe in the things they lecture the rest of us about.

YS’s Law – The Right will always resort to ad hominem attacks and claim hypocrisy – as if hypocrisy doesn’t exist in their own camp.