Few supporters show up, pledges: “We will liberate our Palestine, all Palestine” 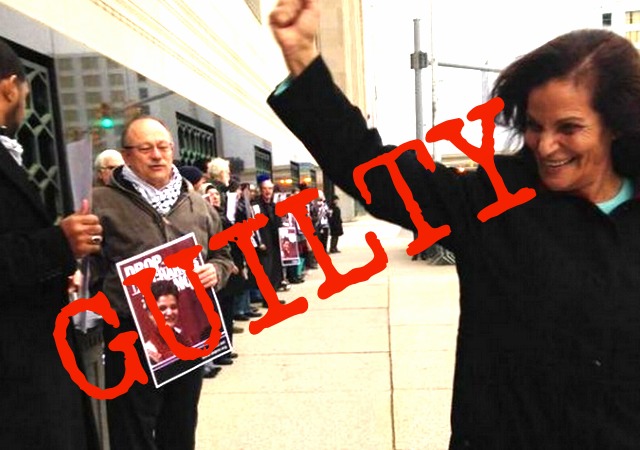 Rasmea Odeh appeared in federal court in Detroit this afternoon for sentencing on immigration fraud charges.

As expected and agreed to in her plea agreement, the Court sentenced Rasmea to deportation and loss of U.S. citizenship. She will serve no further jail time beyond the 33 days already served prior to being released on bail, and is fined $1000.  It is not clear when she will be deported, but is now under ICE supervision (but was not taken into custody, per order of the Judge).

Numerous anti-Israel groups promised to bring large crowds of supporters to the sentencing to support Rasmea. Instead, the turnout was paltry, as these tweets from her supporters show. 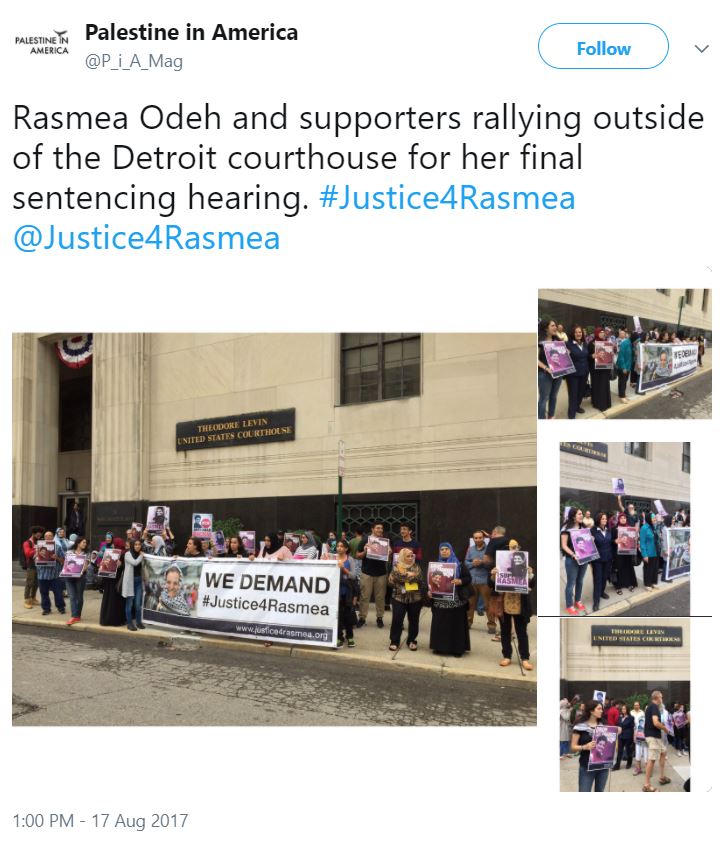 Even busing people in couldn’t raise the crowd size to a face-saving level: 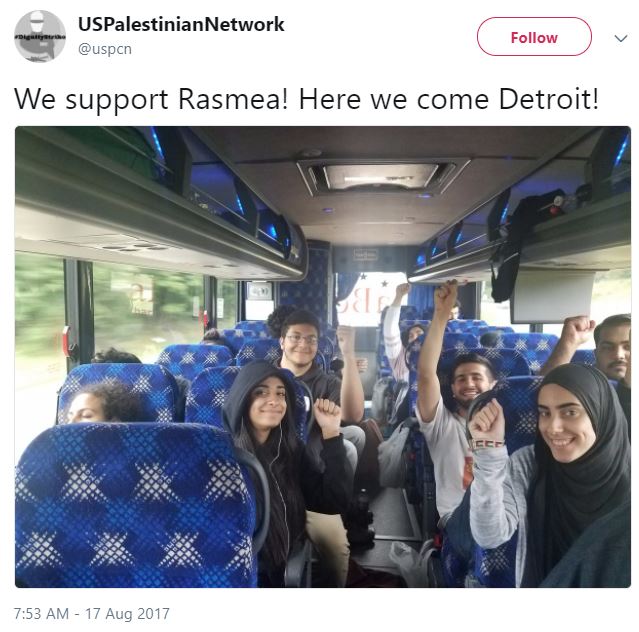 Expect Rasmea supporters to grossly exaggerate the size of the crowd supporting her, they always do.

Rasmea’s and her supporters have concocted an elaborate conspiracy theory portraying Rasmea as the victim of Zionist and Racist American machinations. In fact, Rasmea’s guilt on immigration fraud charges was clear.

Rasmea’s immigration plea resulted from her lies on immigration and naturalization forms in which she concealed a prior conviction and prison term for a 1969 supermarket bombing in Jerusalem that killed two Hebrew University students, Edward Joffe and Leon Kanner. Rasmea also concealed her conviction for the attempted bombing of the British Consulate that same year. Rasmea was released in a 1979 prisoner exchange for an Israeli soldier captured in Lebanon. 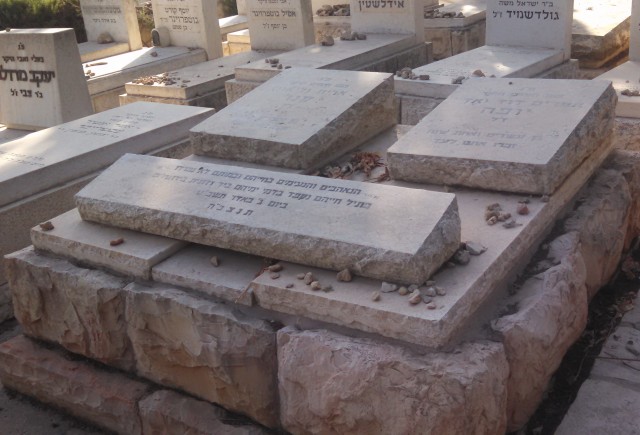 Rasmea and her supporters have thrown up phony defense after defense to both the underlying bombing and the immigration charges, all designed to portray Rasmea as a victim. A summary of these false claims and the truth rebutting the claims was in my December 2012 Op-Ed in the Detroit News, Rasmea Odeh is no victim.

The following posts at Legal Insurrection, among others, methodically rebut the propaganda put out by Rasmea and her supporters:

I told the story of Rasmea’s guilt and the fake victim narrative in an interview with the Investigative Project on Terrorism. The video, screenshots and a partial transcript appear in our post, On Eve of Sentencing, The Lies of Rasmea Odeh and Her Supporters Exposed

The only reports I have are from people who attended the sentencing.

Apparently Rasmea was as defiant as ever. She never has shown any remorse for any of her crimes, and continues against all evidence to claim that she is the victim.

Local News reporter Rod Meloni observed the sentencing, and tweeted some details of the proceedings. 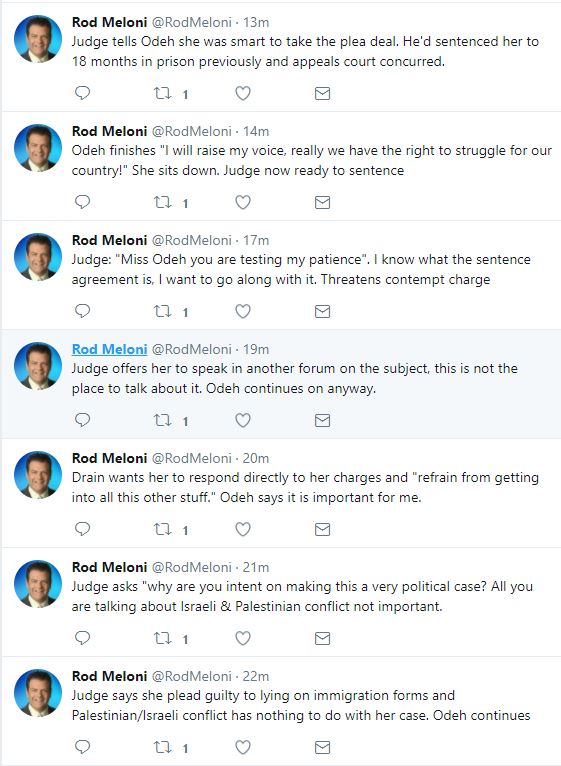 According to Rasmea supporter Ali Abunimah of The Electronic Intifada, Rasmea launched into a long tirade against Israel, and repeated her claims that she was tortured into confessing (I explain in the video above why her story does not hold up): 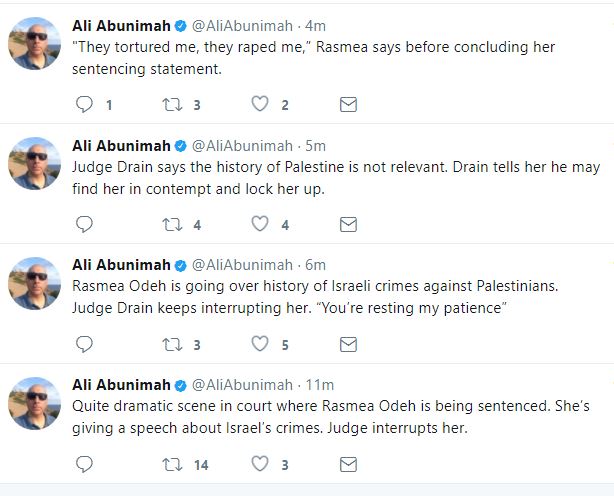 According to reports, the Judge made the following statements during the hearing:

“All this history doesn’t have any bearing”

“These questions [on the immigration forms] were unmistakably clear”

You made false statements “and you did it intentionally”

“When people come here we expect them to be honest and truthful, and you weren’t”

“This case is really more serious than you think it is.”

Outside the Courthouse, Rasmea’s lawyer Michael Deutsch lambasted the Judge in very pejorative terms, even claiming the Judge was “controlled by the U.S. media, by the U.S. power” and didn’t want to hear about the “occupation of Palestine.”

Rasmea also spoke, also attacked the Judge, and declared her right to resist occupation. “We will liberate our Palestine, all Palestine.”

The U.S. Attorney’s Office released a statement which reads, in part:

“Today’s court action clears the way for this defendant’s removal from the United States and should serve as an unequivocal message that the U.S. will never be a haven for those seeking to distance themselves from their past atrocities,” said Steve Francis, HSI special agent in charge.

Just get her the [email protected]$k out of America already!!!

The only problem I have with the outcome is the delay in getting Ratsmea Odious physically booted out and that delay is, unfortunately, completely understandable. At this point, considering her ratting-out some 80 of her fellow terrorists, what country in that region would want her?

Denaturalizing a murderer and booting her out of the country hardly seems just. She needs an appointment with a poxk-marked wall or a short rope on a tall platform.

You have a very weak grasp of the concept of justice. In this case please review the crime she was charged with, and plead guilty to. Execution is not a valid punishment.

Note that she wasn’t on trial for events occurring in Israel in the past.