Arpaio seeks to vacate more than his conviction, and Arpaio’s own lawyers requested oral argument 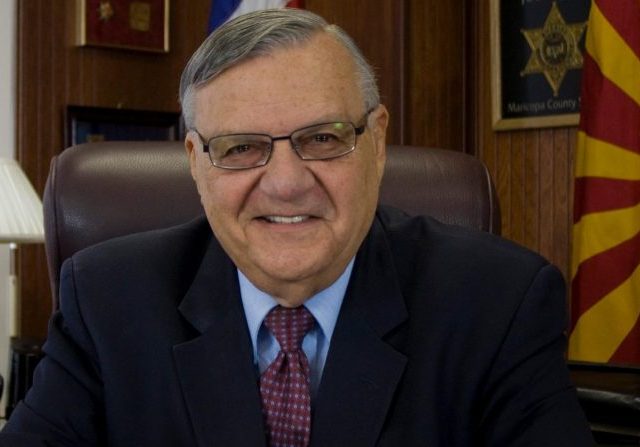 Last Friday, August 25, 2017, President Donald Trump issued an Executive Clemency of Arpaio, which was filed in the case on August 28: 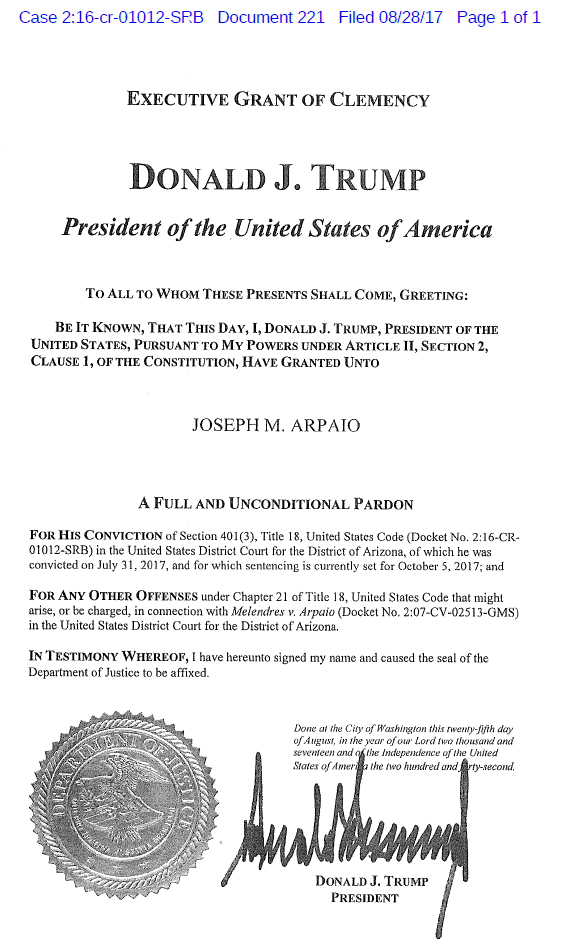 Arpaio then filed a motion to vacate (pdf.) the conviction and dismiss the case against him and for related relief.

Specifically, Arpaio sought not only to have the conviction vacated, but all other Orders in the case:

Pursuant to Fed.R.Crim.P. 48 inter alia, Defendant Joseph M. Arpaio (“Defendant”) respectfully moves to vacate the verdict and all other orders in this matter, as well as the Sentencing on October 5th, and to dismiss this matter with prejudice. This Motion is made on the grounds that on August 25th, 2017, the President of the United States of America issued a full and unconditional pardon of Defendant. A copy of the Executive Grant of Clemency is submitted to the Court as Exhibit “A” hereto, and incorporated as if set forth herein. The President’s pardon moots the case, and it warrants an automatic vacatur of all opinions, judgments, and verdicts related to the criminal charge….

The Judge in the case, who made the criminal contempt finding, has issued an order (pdf.) to hold oral argument on the motion to dismiss, as the Arizona Republic reports, Judge won’t vacate Arpaio’s contempt conviction without oral arguments:

However, Bolton on Tuesday stopped short of throwing out the conviction based solely on Arpaio’s request. Instead she ordered Arpaio and the U.S. Department of Justice, which is prosecuting the case, to file briefs on why she should or shouldn’t grant Arpaio’s request.

Bolton has scheduled oral arguments on the matter for Oct. 4, the day before Arpaio was supposed to be sentenced.

Mark Goldman, one of Arpaio’s attorneys, said, “We look forward to the hearing, and hope that the court will make the appropriate ruling. The verdict should have been set aside by the court already and prior to the pardon for the reason that it was never delivered to Sheriff Arpaio in open court, but instead sent to his attorneys via email, thus violating his constitutional rights to a public trial and to participate in his trial.”

Goldman told The Arizona Republic Arpaio will appeal if the judge does not vacate all decisions in the case.

“We don’t know if the court will,” he said. “And if they don’t, we’ll be appealing, but hopefully this will just put this to rest.”

This report has led to furious speculation that the Judge will contest the legal effect of the pardon on Arpaio’s conviction.

Leading this charge is Jennifer Rubin of the Washington Post, who writes Legal challenge to Arpaio pardon begins (italics in original):

After President Trump’s pardon of ex-sheriff Joe Arpaio, who had been convicted of criminal contempt for violating a court order designed to stop the violation of the constitutional rights of suspected illegal immigrants, conventional wisdom — and certainly the Trump administration — would have us believe that Trump’s pardon powers are unlimited. However, never before has someone stretched the pardon power so beyond its original intent. Trump has now drawn scrutiny not simply from critics of his racist rhetoric but from the court itself.

In other words, this is no slam dunk….

[Ian Bassin, executive director of Protect Democracy] notes, “Judge Bolton may want to see how the honorable lawyers of DOJ’s public integrity section respond personally in open court — themselves as officers of the bar who’ve taken an oath to uphold the Constitution — to the blatant abuse of power by their boss.” He adds, “After all, these are people who’ve dedicated their lives and careers to ensuring our public officials act with integrity and Joe Arpaio and now the President of the United States have spit in the face of that.” Bolton’s hearing will venture into uncharted territory, a voyage necessitated by Trump’s utter disregard for the rule of law and his constitutional obligations to enforce the Constitution and laws of the United States.

The Project Democracy letter and position is here.

This hype suggesting the Judge intends on questioning the legal effectiveness of the pardon as to the conviction appears to be nothing more than partisan speculation. While I can’t read the Judge’s mind, I can read the record and the Judge’s Order setting the hearing.

Here is the sequence. 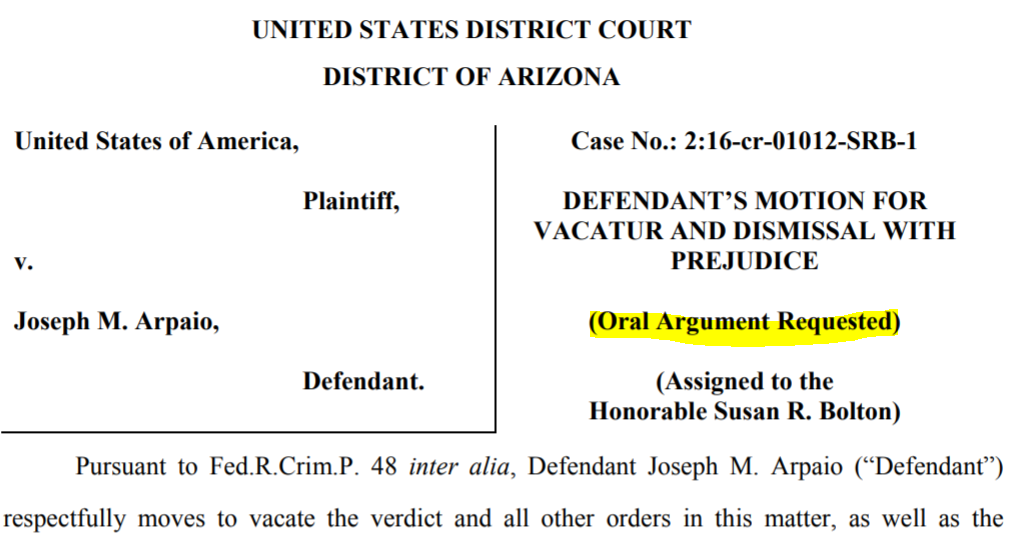 The Court issued an Order (pdf.) scheduling oral argument because the relief sought went beyond vacating the conviction and sentencing, and also because Arpaio’s lawyers requested oral argument: 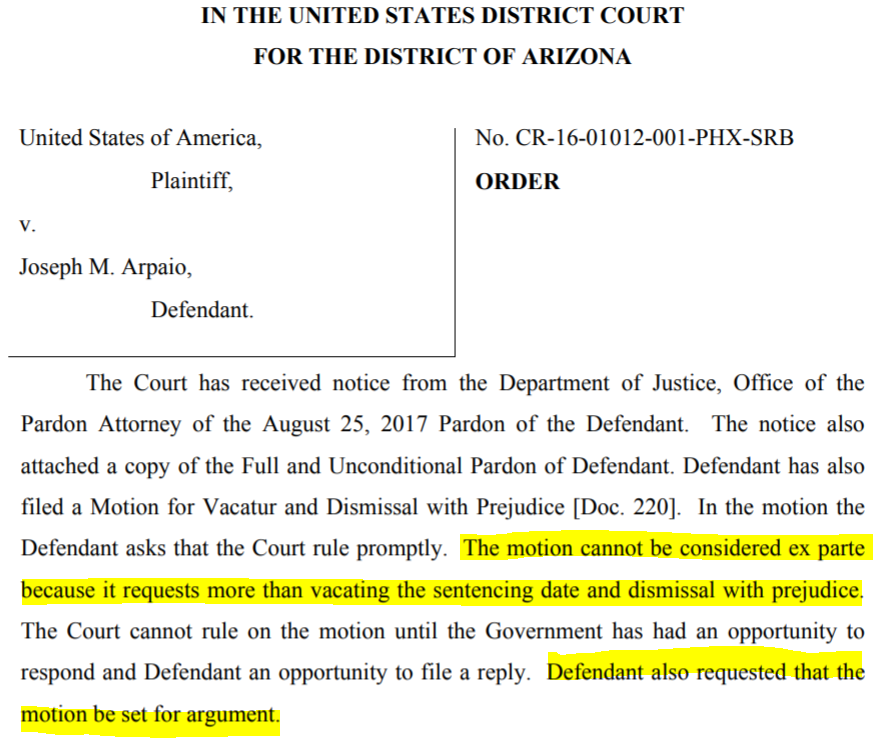 Again, I can’t read the Judge’s mind, but the scheduling of oral argument does not appear to be controversial or unexpected — Arpaio seeks to vacate not just the conviction but all prior orders in the case, and Arpaio’s own lawyers recognized that oral argument would be needed and so requested.

In other words, the hoopla about the scheduling of oral argument appears to be just political hype.

Once again, they will lose.