“Last night, in an interview, she refused to apologize—twice. If she will not resign, the Senate can vote to remove her. I believe they should” 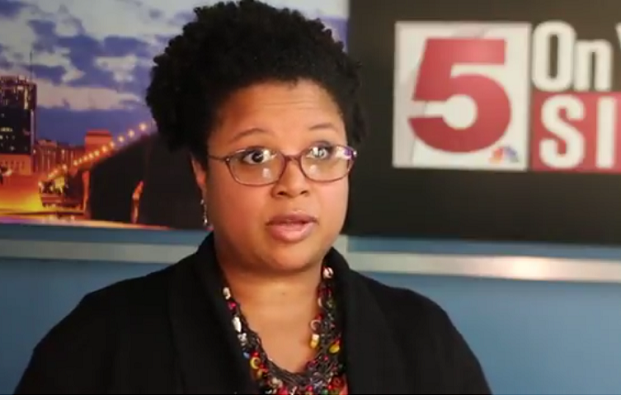 A Missouri state senator posted on Facebook that she hopes President Trump is assassinated.  Her comment, since deleted, acknowledged that such a statement is likely to earn her scrutiny from the Secret Service.  And it has.

Not only is state senator Maria Chappelle-Nadal (D-MO) facing a Secret Service probe, but she is also being called upon to resign.  Further, Missouri Governor Eric Greitens (R) is urging the state legislature to remove Chappelle-Nadal should she refuse to honor the bipartisan calls for her resignation.

Democratic state senator in Missouri is facing resignation calls for posting on Facebook Thursday that she hopes President Trump is assassinated.

A Missouri State Senator from St. Louis has now called for the assassination of @realDonaldTrump. Keep it classy @MariaChappelleN. pic.twitter.com/JTrkxk4Pkz

Needless to say, such an outrageous statement regarding the assassination of a United States President earned her a Secret Service investigation.

Chappelle-Nadal quickly walked back her statement, stating that she was just expressing her anger and frustration, not actually calling for the assassination of the president.

A Democratic Missouri state senator from University City posted, then quickly deleted, a comment on Facebook saying she hoped President Donald Trump would be assassinated.

As a result of Sen. Maria Chappelle-Nadal’s comment, the U.S. Secret Service’s St. Louis field office is investigating and both Sen. Claire McCaskill and the chairman of the Missouri Democratic Party have called on her to resign.

Chappelle-Nadal told The Star that she posted the comment out of frustration with the “trauma and despair” the president is causing with his statements about the events in Charlottesville, Va.

“The way I responded this morning was wrong,” she told The Star. “I’m frustrated. Did I mean the statement? No. Am I frustrated? Absolutely. The president is causing damage. He’s causing hate.”

“On my personal Facebook, I put up a statement saying that I really hate Trump. He’s causing trauma and nightmares. That was my original post,” she said. “A whole bunch of people responded to that.”

Later in the thread, in response to another commenter, she wrote: “I hope Trump is assassinated!”

“It was wrong for me to post that,” Chappelle-Nadal said. “But I am not going to shy away from the damage this president is causing.”

It’s worth noting at this point that for millions of Americans, Obama “caused trauma and nightmares” and “caused hate.”  In fact, it’s nearly impossible to find an American president who has not done so within his opposition’s ranks and base.

Calling for the assassination of a president, however, is such a problem that even Democrats are calling for Chappelle-Nadal’s removal from office.

Stephen Webber, chairman of the Missouri Democratic Party, agreed that Chappelle-Nadal should resign.

“State Sen. Chappelle-Nadal’s comments are indefensible,” Webber said. “All sides need to agree that there is no room for suggestions of political violence in America — and the Missouri Democratic Party will absolutely not tolerate calls for the assassination of the president. I believe she should resign.”

Missouri Auditor Nicole Galloway, a Columbia Democrat, tweeted that Chappelle-Nadal’s “words and sentiments are absolutely unacceptable. Violent rhetoric has no place in our political discourse.”

“I don’t care what the president says or how mad you are, you don’t call for his assassination,” he posted on Twitter. “Especially if you’re an elected official.”

The calls for Chappelle-Nadal’s removal from office include those of Missouri’s governor.

Missouri Gov. Eric Greitens joined calls Friday for state Sen. Maria Chappelle-Nadal to be expelled from the legislature after saying she hopes President Trump is assassinated.

The Republican governor put out a string of tweets noting that lawmakers have called on the Democratic lawmaker to resign and urged the Senate to kick her out if she refuses.

“Senator Chappelle-Nadal said she hopes the President is killed. Republicans and Democrats have called on her to resign,” he wrote. “… Last night, in an interview, she refused to apologize—twice. If she will not resign, the Senate can vote to remove her. I believe they should.”

Chappelle-Nadal, however, remains defiant.  She says, “there’s no way in hell that I’m resigning.”

While it’s nice to see both parties agreeing on something, and the “bring the nation together” types are doubtless pleased with the way this is developing, the fact is that even this dumbnuts has First Amendment protections which should be taken seriously. And since those restrictions apply to the government more than to most of us, it’s not obvious how the legislature or the governor could actually penalize her by throwing her out. While “I hope Trump is [etc … I don’t want to type it]” is certainly vile, and other Missouri pols may think that a hope that any politician be assassinated cuts a bit too close to home, it’s hard to read actual “incitement” there.

Thomas Beckett might differ on a point or two. She is just saying what a lot of people WANT. Read Dowd’s NYT piece about Trump and Charlottesville but especially read the comments section for an otherworldly view of things…. as in “on another planet”. We have a serious psychological and psychiatric gulf forming in this country .

Yes, she said what a lot of people want, and they have every right to want it, and to express that desire. This is absolutely protected speech, and no government entity may do anything to discourage it. But I think the senate could still expel her for it, notwithstanding that.

You are correct that what she wrote is absolutely protected speech, and if she were a government employee it would be illegal to fire her for this.

I think, though, that 2/3 of the state senate could expel her even for exercising her constitutional rights. Expulsion is fundamentally a political sanction, not an administrative one. The only limit the MO constitution places on 2/3 of the senate’s right to expel a member is that they may not expel the same member twice for the same reason; to me that says that if one party has 2/3 of the seats they can expel the other 1/3 just for belonging to the other party, which is obviously constitutionally protected. Therefore they could expel her for this too. If she were to be reelected then they couldn’t do it again.

Another consideration: Even if Rankin should in principle prevent such an expulsion, I’m sure the courts would call it a political question and thus none of their business.

Someone says, “Assassinate the President,” eh. Someone says the ‘N’ word, death threats and mayhem take over across the country.

“Then the Secret Service should just shoot her.”

Although I’m not particularly conservative myself, I’d like to be able to refer liberals to this site so that they can see how well-founded Tea Party members’ concerns and proposals tend to be. Comments like yours will, instead, tend to confirm the liberals’ belief that Tea Partiers are fascists who need to be opposed by all means necessary.

Sorry — this post was meant to be a reply to Matt_SE, above.