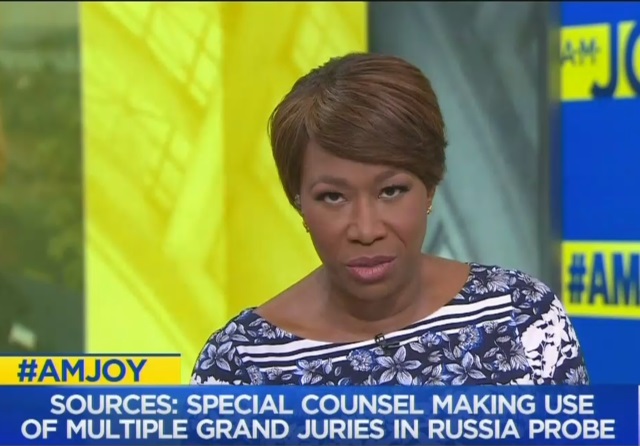 On her MSNBC show this morning and while discussing the grand jury that Robert Mueller has impaneled in Washington, DC, Joy Reid dismissed as “one of the more absurd arguments I’ve heard” Harvard law prof Alan Dershowitz’s assertion that DC has “an ethnic and racial composition that might be very unfavorable to the Trump Administration.”

So Reid and Butler are arguing that the racial composition of juries is irrelevant? Wait a second: isn’t the exclusion of African-Americans from juries one of the key complaints of the civil rights community in the area of criminal justice?

Here’s the New York Times worrying about the possible exclusion of African-Americans from juries. And here’s a long TV segment wondering about racial disparities in jury selection . . . on MSNBC!

So why is the race issue front and center on the one hand, but “absurd” when raised in the current case? Neither Reid nor Butler address that question.

Note: you’ll hear Reid chuckle as she describes Dershowitz’s argument that “DC has so many black people in it.” So concern for the racial composition of juries is “absurd” to the point of literally being laughed off. Good to know!

Note segundo: Reid opened the show with a clip of Stephen Colbert: “I’m going to say something right now something no one has ever said before—God, I wish I had jury duty! I’m available.” Don’t jurors swear to be fair and open-minded? Guess that doesn’t apply in liberal-land when Trump is the target.

JOY REID: one of the ways that Trump’s supporters and backers are trying to back him up is by saying the composition of this grand jury is unfair to Donald Trump. On Friday, on WABC, Alan Dershowitz, who’s been a huge defender of Donald Trump, claimed that, he told Rita Cosby that the racial and ethnic makeup is stacked against Donald Trump because DC has so many black people in it. That seems to me to be one of the more absurd arguments that I’ve heard against this grand jury process. What do you make of it?

PAUL BUTLER: Alan Dershowitz was my criminal law professor, but I’m here to teach him: Professor Dershowitz, you’re just wrong on that issue.

rino’s probably love this grand jury, gives them cover when they decide to impeach DJT.
“Our hands were tied, the grand jury said he was guilty. We didn’t want to impeach but what else could we do? Rule of law blah, blah, blah.”

So lest they think they’re being cute, they need to remember not everyone is for rinoville and it’s denizens.

But of course you won’t – instead, you’re doubling down by trying to nullify the results of the election because you don’t like the fact that you’ve been rejected and that you’re out of power. Except we’re not going to simply shrug and go back to letting you dictate how we live.

Donald Trump is a warning. Trump is the best case scenario. If you somehow depose him via your smarmy shenanigans, what comes along next is really going to upset you. You need to understand something.

“Our hands were tied, the grand jury said he was guilty. We didn’t want to impeach but what else could we do? Rule of law blah, blah, blah.”

Um, what? How could a grand jury ever say someone is guilty? That is not a question that even comes before them.

Milhouse, I believe that is called sarcasm. Or perhaps, exaggeration-to-make-a-point.

OK then, let’s have a Grand Jury consisting of White GOP voters since racial and Party affiliations don’t matter according to Reid.

An exercise to show the absurdity to this whole mess is to replace Trump with obama. Then change the grand jury’s location to Alabama with an all white Republican law team and jury selected by the white Republican special prosecutor. Does anyone think for one minute the msm would stand for this arrangement? Or the Demorat Party? But hey, it’s a weird white guy that we hate so none of this matters.