Trump calls India to step up the fight against terrorism in Afghanistan, disses Pakistan 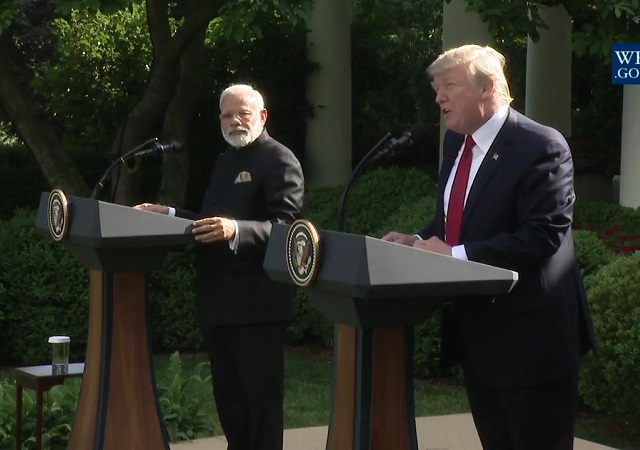 India today welcomed US President Donald Trump’s determination to enhance efforts to overcome the challenges facing Afghanistan and confront issues of safe havens and other forms of cross-border support enjoyed by terrorists.

During his speech, Trump praised India’s help in Afghanistan: “We appreciate India’s important contributions to stability in Afghanistan,” Trump said. “But India makes billions of dollars in trade from the United States and we want them to help us more with Afghanistan, especially in the area of economic assistance and development.”

Going by New Delhi’s response, the Hindu-majority country will be stepping up to play a greater role in Afghanistan. “India shares these concerns and objectives,” India’s foreign affiars spokesperson Raveesh Kumar said. “We have been steadfast in extending reconstruction and development assistance to Afghanistan in keeping with our traditional friendship with its people. We will continue these efforts, including in partnership with other countries,” Kumar said in press statement.

In his speech, Trump laid out his vision for defeating Islamist terrorism in Afghanistan: “Our troops will fight to win. We will fight to win,” Trump said. “From now on, victory will have a clear definition. Attacking our enemies, obliterating ISIS, crushing Al-Qaeda, preventing the Taliban from taking over Afghanistan, and stopping mass terror attacks against America before they emerge.”

India is a natural ally for Trump’s new strategy to root out the Islamist terrorism in South Asia. Given Afghanistan’s proximity to India’s northern borders, New Delhi does not want to see Afghanistan revert back into a base of operation for international terrorism. Since late 1980s, India has waged a lonely battle against Islamist terrorism — often at a very heavy cost in civilian and military lives. India’s Muslim-majority Kashmir region alone has lost more than 47,000 civilians and over 6,000 security personnel since the conflict began around 1988.

India is already the biggest regional player in Afghanistan’s reconstruction. New Delhi has given $3 billion in assistance to Kabul and built over 2,500 miles of roads and constructed electric plants and irrigation projects in the war-ravaged country.

Thinking more about Trump speech key feature may not be Afghan but developing alliance with India which will worry both Pakistan and China.

Trump also had a clear warning for the Islamic Republic of Pakistan: “The U.S. can no longer be silent about Pakistan’s safe havens for terrorist organizations, the Taliban and others, that pose a threat to the region and beyond [ …] No partnership can survive a country’s harboring of militants.” President said.

Vice President Mike Pence also echoed on Trump’s statement on Pakistan, saying the U.S. is “putting [Pakistan] on notice. They need to step up as a partner.”

Pakistan’s military leadership was in denial until yesterday’s presidential speech. Pakistan’s leading daily Dawn reported, “Ahead of the speech, the Pakistan Army had brushed off speculation that Trump could signal a stronger line against Islamabad, insisting the country has done all it can to tackle militancy.”

Asked about Trump’s speech, Chinese Foreign Ministry spokeswoman Hua Chunying said Pakistan was on the front line in the struggle against terrorism and had made “great sacrifices” and “important contributions” in the fight.

“We believe that the international community should fully recognise Pakistan’s anti-terrorism,” she told a daily news briefing.

“We are happy to see Pakistan and the United States carry out anti-terror cooperation on the basis of mutual respect, and work together for security and stability in the region and world.”

China has invested $62 billion in Pakistan to secure a land route to the Arabian Sea. This 2000-mile “economic corridor”, with a network of motorways and train tracks, seeks to connect China’s north-western Xinjiang province to the Pakistan’s seaports of Gwadar and Karachi.

With Jihad now gaining a foothold among the Muslim population of China’s Xinjiang province, Beijing can’t afford to sabotage President Trump’s strategy against Islamist terrorism in South Asia. As Reuters further noted in its report:

China has its own security concerns in the region, in particular any links between militants in Pakistan and Afghanistan and Islamist groups China blames for violence in its far western region of Xinjiang.

Hm, I seem to remember something about where bin Laden was hiding out, some country that started with a ‘P’ if I recall correctly.

1
notamemberofanyorganizedpolicital in reply to georgfelis. | August 22, 2017 at 2:02 pm

Those Pakis better pack it in – because they’re history!

There, or at george clooney’s house.

At least a major security breach courtesy of DWS and the Dems in Congress has been plugged. As to other channels for the ISI… don’t know but they are very efficient…

Buy our real threat is from within,from the left and it’s Genocide Guys (Antfa) and its media backers and. GOPe enablers.

Quite a situation. But it is miracle Clinton is not Obama third term. We literally owe Trump our freedom.

Imagine. Being friendly to our friends and strong to our foes. What a crazy notion!

Wow. Who could’ve predicted that India would support an anti-Pakistan initiative?