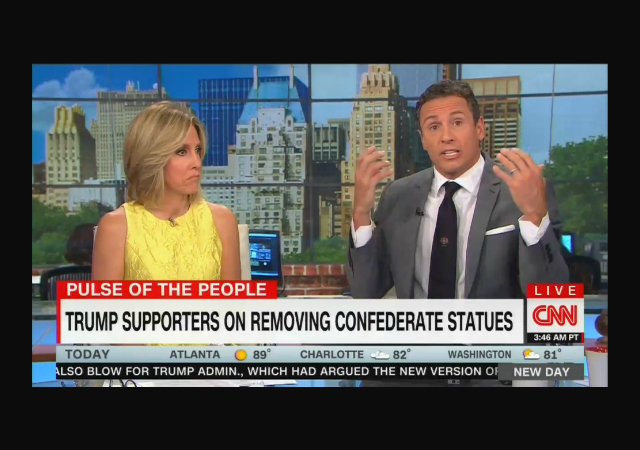 The liberal media’s contempt for people who support President Trump was on display on CNN this morning. After a clip was aired of a panel discussion Alisyn Camerota conducted with six Trump supporters, Chris Cuomo disparaged them:

“You have a fundamental problem with this group of people, with the difference between fact and feeling. What they feel is true versus what is actually true . . . they absorb what [Trump] says, even though they clearly don’t fully comprehend it.”

Camerota made clear that she concurred with Cuomo’s unflattering assessment of Trump supporters. When Cuomo spoke of the difference between “what they feel is true versus what is actually true,” Camerota interjected: “yesterday, we heard that in Technicolor,” a reference to a segment of her panel discussion previously aired.

TRUMP SUPPORTER #1: They’re throwing out rabbits. It’s called chasing rabbits. Let’s all go over here to look at this rabbit so we leave this alone over here.

ALISYN CAMEROTA: And what are we leaving alone over here? What are they distracting us from?

CAMEROTA: But Ellie, what do you think the rabbit is distracting us from?

TRUMP SUPPORTER #1: They’re so many issues, because there’s so many rabbits.

SUPPORTER #3: I think the distraction is from him quietly transforming, retransforming America back to what it used to be. Because if you look around, you may not cover it, but the things he has done to roll back the transgender bathrooms, the regulations. He’s doing things, undoing the agenda, you know they want to say it’s Obama’s legacy, but no: I say he’s doing what he promised he would do. There are things that nobody’s reporting, and like she said, they’re chasing other rabbits.

CAMEROTA: We’ve heard it many times: they see progress. They’re happy with what the president has done with executive orders, with border crossings being down, deportations being up, rolling back environmental regulations. That’s what they want to focus on.

CHRIS CUOMO: Right. And I think you have a fundamental problem with this group of people, with the difference between fact and feeling. What they feel is true versus what is actually true.

CAMEROTA: Yesterday, we heard that in Technicolor.

CUOMO: The odds that, the likelihood that, the one woman with the hat says, well, they’re throwing rabbits out to distract. Yet she sees that as a virtue. But they can’t really identify what it’s being distracted from.

What does this tell you? This tells you that what the president says, matters. And to people that support him, they absorb what he says, even though they clearly don’t fully comprehend it.

Note: after his “they don’t fully comprehend” shot at Trump supporters, Cuomo tries to cover his tracks, adding “as is always true in politics.” Anyone remember Cuomo or other members of the liberal media similarly disparaging the intelligence of Obama supporters? Neither do I.

Why can’t you just understand?? You must be one of those ignorant inbred REDNECKS!!

Interesting thing about the D’s tactic of vilifying literally everyone that isn’t instantly a zealot for every bizarre cause that they dream up – as soon as you so much as question that the latest dogma, you are purged. After that, they make it virtually impossible for themselves to coax you back into the fold.

You are literally HITLER!!

After being on the receiving end of that, even once, on just one issue, the journey begins from Left to Right and the D’s just keep driving you harder and harder and you never come back.