Congressional Republicans are currently engaged in an embarrassing struggle to revamp Obamacare. When revamping didn’t work, they turned to repeal, only for members of their own caucus to balk.

We’ve explored the procedural issues with repealing Obamacare, but there’s still another reason we’re likely stuck with the bones of government-run health insurance for the foreseeable future — much of the public wants it this way.

Omnibus spending and Obamacare were once repulsive enough to birth the Tea Party movement, but in the years since Obamacare has taken root, voters have warmed to the idea of some form of state-sponsored health insurance.

Historically, the solution to bad, or poorly conceived government programs is not eradicating the problematic program, but more government intervention. And it looks like Obamacare will be no different.

A poll released by Pew last month shows a frightening uptick in the number of Americans who believe it’s the government’s responsibility to ensure everyone has health insurance.

Even among those who self-identify as conservative, a mere 9% believe the federal government should get out of the health insurance business.

Currently, 60% say the federal government is responsible for ensuring health care coverage for all Americans, while 39% say this is not the government’s responsibility. These views are unchanged from January, but the share saying health coverage is a government responsibility remains at its highest level in nearly a decade.

Among those who see a government responsibility to provide health coverage for all, more now say it should be provided through a single health insurance system run by the government, rather than through a mix of private companies and government programs. Overall, 33% of the public now favors such a “single payer” approach to health insurance, up 5 percentage points since January and 12 points since 2014. Democrats – especially liberal Democrats – are much more supportive of this approach than they were even at the start of this year. 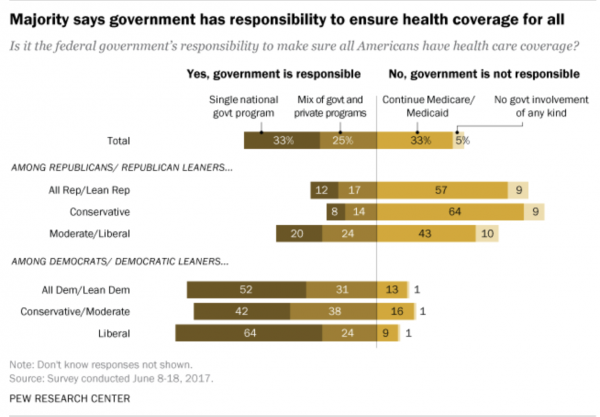 Compounding this troublesome and newfound love of state-subsidized health insurance is the belief a single-payer system will be more beneficial than the current cluster. Single-payer remains mostly limited to the Democratic and younger voting public, but support in those groups continues to multiply:

Among Democrats, 52% now say health insurance should be provided through a single national insurance system run by the government, while fewer (31%) say it should be provided through a mix of private companies and government programs. The share of Democrats supporting a single national program to provide health insurance has increased 9 percentage points since January and 19 points since 2014.

Overall, support for a single-payer health insurance system is much greater among younger adults than older people. Two-thirds of adults younger than 30 (67%) say the government has a responsibility to provide health coverage for all, with 45% saying coverage should be provided through a single national program.

So long as the voting public believes government-run health insurance is the best rememdy, eradicating Obamacare will be a next to impossible task.

The problem is we gave these morons the power and they will never release that power. We will just vote back and worth who we want to have that power.

We are screwed forever! Or until the next big collapse which isn’t that far off. With the fed in control we are screwed.

Get the theme, WE ARE SCREWED!