Prager U: What Is Fake News?

Prager U: What Is Fake News?

“The narrative was right, but the facts were wrong.” 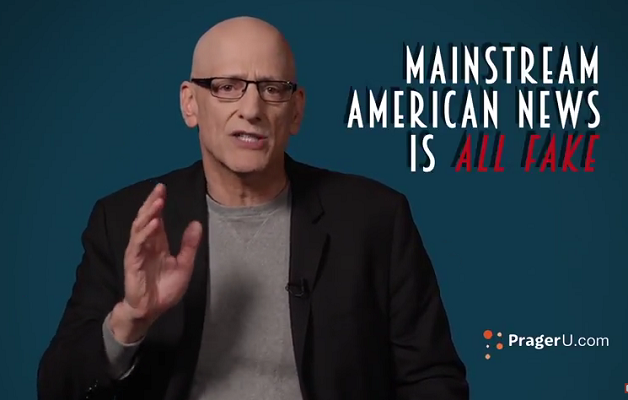 You’ve probably heard a lot of people recently screaming and yelling about Fake News.  Charges fly from all points on the political spectrum: this story is mistaken — it’s Fake News; that statement is incorrect — it’s Fake News.

But to my mind, these arguments miss the point. Mainstream American news is ALL fake because the major news outlets are so consistently biased toward the left that whether any given story they report is factual or not, their overall reportage is essentially leftist propaganda. You can complain about the right-wing slant of Fox News all you want, but left-wing ABC, CBS, NBC, MSNBC and CNN have, combined, almost ten times the viewers.

When a scandal breaks on the right, the news is the scandal. When a scandal breaks on the left, the news is: who wrongfully disclosed that scandalous information? Thus, when the media wanted to raise suspicions that Donald Trump was somehow in league with the Russians, they freely quoted illegally leaked information from intelligence sources. But when Congressman Devin Nunes announced he had information that the Obama administration might have misused intelligence against Donald Trump’s transition team, the story became: How did Nunes get that information? And did he do it legally?

Individual extremists on the right are highlighted, but the overall extremism of the left is ignored. In one of the fakest Fake News stories in recent history, the mainstream media rose up as one to tar conservative Tea Party members as racist, when all they really wanted were lower taxes and less government spending. Reporters gave the Tea Party disparaging nicknames; represented their almost universally peaceful gatherings as “ugly” and “violent”; and whenever an individual Tea Partier said something wrong, it was cited as evidence that the movement itself was tainted. Meanwhile, the continually violent, vandalizing, anti-Semitic socialist movement that went by the name of Occupy Wall Street was hailed by journalists as an important social development right up to the moment it vanished without a trace (except for the piles of litter its protesters left behind).

. . . . Newsweek Editor Evan Thomas was once criticized when his magazine essentially convicted
some white Duke University lacrosse players of raping a black woman — a rape, it turns out, they did not commit – because it didn’t happen. Thomas defended himself, saying, “The narrative was right, but the facts were wrong.”