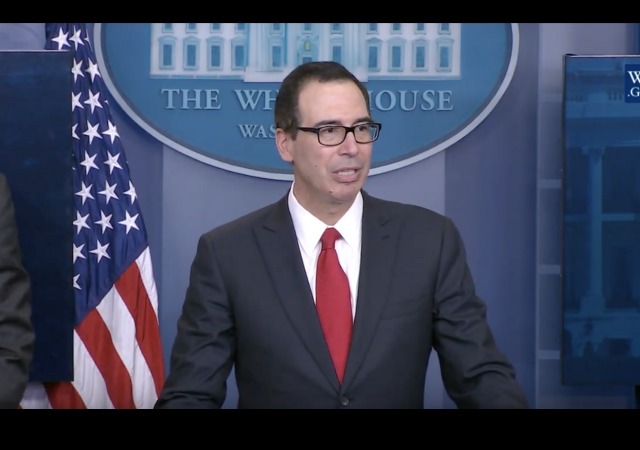 After failing to do anything with Obamacare, Congress has gone on recess without addressing the debt ceiling.

Treasury Secretary Steven Mnuchin has warned Congress to address the debt ceiling for the past seven months and do something before recess. Mnuchin said the government needs to raise the debt ceiling before September 29 or it will run out of money to pay the bills.

Congress will only have 12 days to address the issue after the lawmakers return from recess.

The Treasury Department has been employing cash-conservation measures since March, when borrowing hit the formal ceiling of nearly $20 trillion. Those measures are expected to run out in early to mid-October. When they do, the government won’t have money to pay interest on debt, write Social Security checks or make millions of other routine payments, unless it can tap credit markets for borrowing to raise additional cash. Missing payments could send financial markets in a tailspin.

The path to raising the debt limit will be the first major political test for Mr. Mnuchin, a Washington novice who has been intensely focused on the Trump administration’s forthcoming tax overhaul proposal.

“Based upon our available information, I believe that it is critical that Congress act to increase the nation’s borrowing authority by September 29,” Mr. Mnuchin said in last week’s letter.

It is going to be a tight squeeze. Treasury’s cash balance is expected to drop to near $25 billion in September—a precariously low level, especially in the event of some unforeseen shock, such as a severe natural disaster, global crisis or unexpected drop in revenue.

However, September 29 is not set in stone. It’s the day Mnuchin believes the government will run out of money. It could occur before or even after.

Either way, Congress delaying the debt ceiling issue can cause problems in the market. From CNN Money:

Waiting until the last minute to raise or suspend the debt ceiling is a bad idea. It causes a lot of uncertainty in the markets, which causes U.S. borrowing rates to rise. It diverts a lot of human capital at the Treasury that could be better spent on other matters of national importance. And it tempts fate.

“Every time Congress delays debt limit action to the last minute … [i]t risks an inadvertent mistake that might result in default on our debt, which would have a long-term impact on the creditworthiness of the United States and on interest rates paid by consumers across the country,” fiscal experts Shai Akabas and Steve Bell of the Bipartisan Policy Center noted in a recent opinion piece.

The debt ceiling issue in 2011 and 2013 caused the markets to spiral out of control, which led “S&P to downgrade the U.S. credit rating.”

During former President Barack Obama’s administration, “some Republicans in Congress challenged the White House to allow cash to run down and prioritize some payments, such as interest on debt, over others, such as discretionary spending.”

Lawmakers may attempt that approach, but it may not work:

Transcripts from a 2011 meeting of the Federal Reserve showed the central bank, as the Treasury’s financial agent, was prepared to continue making payments to bondholders, while potentially delaying other payments, if Congress failed to raise the borrowing limit back then.

Mr. Mnuchin told lawmakers on Capitol Hill last week he had “no intent” to prioritize payments, which would put him in the uncomfortable position of choosing whether to pay foreign bondholders ahead of retirees or government workers. “I think that doesn’t make sense,” he said. “The government should honor all of its obligations and the debt limit should be raised.”

Mr. Mnuchin told lawmakers on Capitol Hill last week he had “no intent” to prioritize payments, which would put him in the uncomfortable position of choosing whether to pay foreign bondholders ahead of retirees or government workers. “I think that doesn’t make sense,” he said. “The government should honor all of its obligations and the debt limit should be raised.”

T-rump has said that entitlement programs will be fully funded. This is a lie. They cannot continue as is.

“That which cannot continue won’t”.

No, that’s Mr. Mnuchin refusing to bite on the MSM bait. If he *had* answered the question according to the law (which is Obligations and Bonds first, paychecks second), the press would promptly run out screaming into the streets about how the Republicans are planning on taking away paychecks and stealing the last crumb of bread from the poor.

I dunno… I kinda think that’s what brave people do. So, what can we deduce from MnanyChins and Der Donald’s words?

That that which cannot continue will be lied about…???

Congress should take a recess. That will allow members to go on their taxpayer funded “fact finding” junkets. Since transgenderism and transgender rights are among the most important issues of today for which Congress must debate and enact legislation, I suggest they begin by studying gender dysphoria among the indigenous Korowai tribe of Papua New Guinea.

You probably haven’t heard much about the looming pension crisis because elected officials don’t like talking about it and it’s easy for them to kick the can down the road: they can make promises to public employees now that won’t come due until they’re out of office.

But the slow creep of pension costs is crowding out investments in other areas, including education, environmental stewardship, social services, and public transportation. In essence, the state is being forced to default on its social obligations to pay for its pension obligations. If you’re a progressive, fixing this problem may be the most important issue facing the state.

The article lauds Jerry Brown for lowering the projected rate of return on the $330 billion fund from 7.5% to 7%. For comparison purposes only, long term T-Bill rates are less than half that rate.

How much do you want to bet that the “fiscally conservative” Republicans just raise the tab again, like a bunch of Democrats?

Given the toxic environment in Congress these days with Schumer acting as the new harry “NO!” Reid and the Republicans split between the fiscally tight Tea Party who always demand a balanced budget and the rest, I see grid lock coming. I wager Chuck Schumer will also hold an agreement hostage as a bargaining chip to obtain certain concessions from the Republicans who won’t want to give on them. Ultimately, many will happily demand that we allow the US to default on some of our debts just to make a point while failing to realize what would happen if this happened for the results and the aftershocks would be far more severe than they can understand. It could even be the dreaded black swan so many are fearing. I do not look forward to this fall and that is for sure and certain.