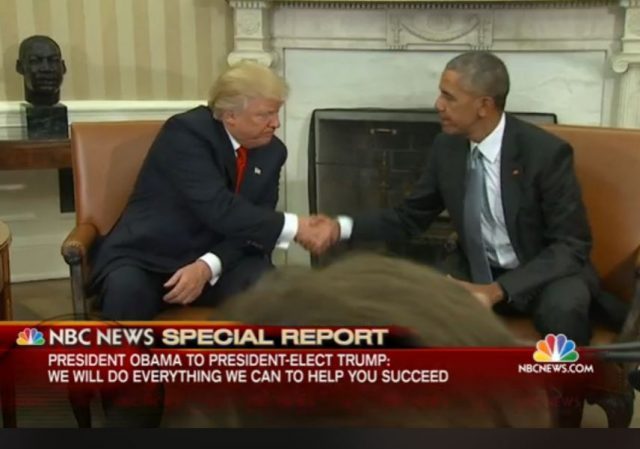 President Donald Trump’s Department of Homeland Security did not touch former President Barack Obama’s Deferred Action for Childhood Arrivals (DACA), which allows undocumented immigrants, who came to the U.S. as small children, to remain in America. From The New York Times:

The Department of Homeland Security announced late Thursday night that it would continue the Obama-era program intended to protect those immigrants from deportation and provide them work permits so they can find legal employment.

A fact sheet posted on the department’s website says immigrants enrolled in the 2012 program, known as Deferred Action for Childhood Arrivals, “will continue to be eligible” to renew every two years and notes that “no work permits will be terminated prior to their current expiration dates.”

From the DHS fact sheet:

Q. Does this mean that DACA recipients will not be able to apply for a three-year work authorization, as established in the DAPA memorandum?

Immigration activists have welcomed this decision:

“This is a big victory for Dreamers amid months of draconian and meanspirited immigration enforcement policy,” said David Leopold, an immigration lawyer. “The preservation of DACA is a tribute to the strength of the Dreamer movement and an acknowledgment — at least in part — by the Department of Homeland Security that it should not be targeting undocumented immigrants who have strong ties to their communities and have abided by the law.”

On the campaign trail, Trump promised he would eliminate the Dreamer policy since Obama “defied federal law and the Constitution” with it.

But once he took office, Trump has toned down his rhetoric. In April, DHS Secretary John Kelly told CNN that the department has not targeted ‘Dreamers’ because officials were more concerned with criminals:

I blogged in February that DHS issued new guidelines for immigration, which listed which aliens should be deported by importance. The memos spared those under DACA:

The changes would spare so-called “dreamers.” On a conference call with reporters, a DHS official stressed that the directives would not affect Obama-era protections for illegal immigrants who came to the U.S. as children and others given a reprieve in 2014. But outside those exemptions, Kelly wrote that DHS “no longer will exempt classes or categories of removable aliens from potential enforcement.”

*UPDATED* The New York Times has updated its piece to stress that officials have told its reporters that the statements on the fact sheet “were intended only to clarify that immigrants enrolled in the DACA program would not immediately be affected by a separate action officially ending a similar program for the parents of those immigrants.”

No other republican would even talk about it until Trump made it a campaign issue. I’m endlessly grateful for that alone, he changed the ‘national conversation’ as it were.

So cool, he changed the conversation. And then changed nothing. And we complain about the do nothing Republicans in Congress. Nothing has changed with respect to the country’s immigration policy.

I predicted this would happen. And were it not for the signature Trump issue (immigration), he would have never gained a foothold).

If that’s what you REALLY thought, then why the hell didn’t YOU run for office?

No civic responsibility, if all you can do is carp, and not try to get your hands on the ball and run it down the field.

The NYT story is nothing more than spin.

The President cancelled the DAPA program because it was under an injunction which was still in place after a hearing before the SCOTUS. It was a dead program which had essentially exhausted its judicial options and was simply eliminated. Here is the text of the post on the DHS web site:

On June 15, Department of Homeland Security Secretary John F. Kelly, after consulting with the Attorney General, signed a memorandum rescinding the November 20, 2014 memorandum that created the program known as Deferred Action for Parents of Americans and Lawful Permanent Residents (“DAPA”) because there is no credible path forward to litigate the currently enjoined policy.

(2) have continuously resided here since before January 1, 2010;

(3) have been physically present here on November 20, 2014, and when applying for relief;

(4) have no lawful immigration status on that date;

(5) not fall within the Secretary’s enforcement priorities; and

(6) “present no other factors that, in the exercise of discretion, make [ ] the grant of deferred action inappropriate.”

The rescinded policy also provided expanded work authorization for recipients under the DACA program for three years versus two years. This policy was also enjoined nationwide and has now been rescinded.

The June 15, 2012 memorandum that created the Deferred Action for Childhood Arrivals (DACA) program will remain in effect. ” – https://www.dhs.gov/news/2017/06/15/rescission-memorandum-providing-deferred-action-parents-americans-and-lawful

It does not signal ANY Trump administration policy change.

So, DAPA had 6 requirements that the person had to comply with before being given a “deferred action”.

DACA has 7 requirements – one being in the country as of June 15, 2012. see the list in a comment above. So, the quantity of “dreamers” is not increasing.

DHS knows how many people have a current DACA permit and they know the rate of application. Perhaps, this is a program that will quietly die out due to lack of activity.

It would, except illegal aliens lie and DHS can’t prove their lies.

If they have to go through that hassle of faking documents, then why are they applying for DAPA since there are other requirements and it has to be renewed.

Perhaps the DACA program is for those who are really interested in being in the US.

And, the DACA program does not give any type of legal status in the US.

I’m actually surprised no one has sued over this. It has the same problems constitutionally as DAPA.

Also, the DREAM begins at conception. Obama’s semantic games give comfort to the Pro-Choicers and anti-nativists. Republicans should reject progressive, liberal euphemisms.

The Trump administration has fulfilled another one of Donald Trump’s campaign promises by rescinding the Deferred Action for Parents of Americans and Lawful Permanent Residents (DAPA) program implemented under Barack Obama that could have allowed as many as five million illegal aliens with children who are citizens or lawful permanent residents to remain in the country if they met certain criteria.