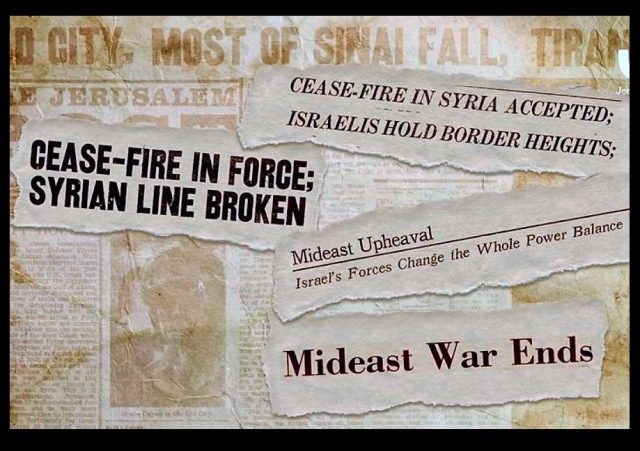 Today, after 132 hours of fighting between Israel and her Arab neighbors, a cease-fire went into effect with Syria.

Govt. has decided we will cease fire at 2 pm. Have scheduled meeting with UN rep. in Tiberias at that hour

Israel has this afternoon reportedly achieved it aims on the northern front (having captured all of the southwestern corner of Syria, including the steeply rising high ground of the Golan Heights that extends from below sea level around the Sea of Galilee to 3,000 feet around El Quneitra, in overnight and morning advances).

The #GolanHeights in June 1967 and #today #SixDayWar #Israel #ThenAndNow pic.twitter.com/ebZKwmYbt5 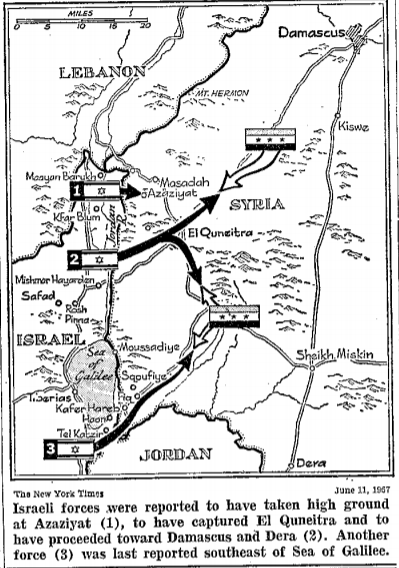 A “badly battered Syria” agreed to halt the fighting.

So with earlier cease-fires holding, the war is now over.

A brilliant military campaign comes at a high cost

In four days Israel took the entire Sinai Peninsula along with the Gaza Strip from Egypt, at the same time capturing east Jerusalem and Judea and Samaria (the West Bank) from Jordan in two days, and afterward quieting the barrage of shelling from the Golan Heights, once a Syrian redoubt.

It was a brilliant military campaign—a war of self-defense which began as a preemptive strike to fend off an Arab threat.

As noted in our prior post, Egyptian leader Gamal Abdel Nasser and his allies gambled poorly. Their entire strategy was predicated on Israel starting the war. But they were overconfident that their military forces would prevail and “outperform the IDF”.

By all accounts, Israel’s victory has been astonishing, not least because it was so unexpected.

But it’s also come at a very high cost. Casualty figures are just starting to be released. Although it hasn’t yet been confirmed, early reports estimate that Israel lost nearly 800 soldiers (with some 2,600 wounded).

In proportion to her total population, that’s as many men in arms as the US lost in eight years of fighting in Vietnam.

The speed with which Israel this week devastated the might of the Arab militaries has left the populations feeling humiliated.

Our colleagues down in Cairo—who have been sharing information with us this past week (see our earlier posts)—are warning that this doesn’t bode well for peace. Israel may have to face the fact that in the near future

the shame felt by the Arabs [may] compel their leaders to prepare for the chance to exact revenge and regain their honor.”

A military victory to celebrate

Russia has now cut all diplomatic ties with Israel. Immense pressure on Eshkol to end the war. #sixdaywar pic.twitter.com/6iiFRgIS4I

Egypt’s President Nasser (who, after dramatically announcing his resignation yesterday, is now back in office—just as we predicted) has been granted new, sweeping powers, ostensibly to redress the resounding defeat of the country’s armed forces.

Extraordinary events in #Egypt. Masses of people in #Tahrir square calling for Nasser to remain in office, despite defeat.

But none of this news seems to be dampening Israeli spirits today and their well-deserved pride and elation.

It’s hard to get exercised about a fit of Soviet pique at the UN or Nasser’s latest machinations when you can literally swim in the Suez Canal: 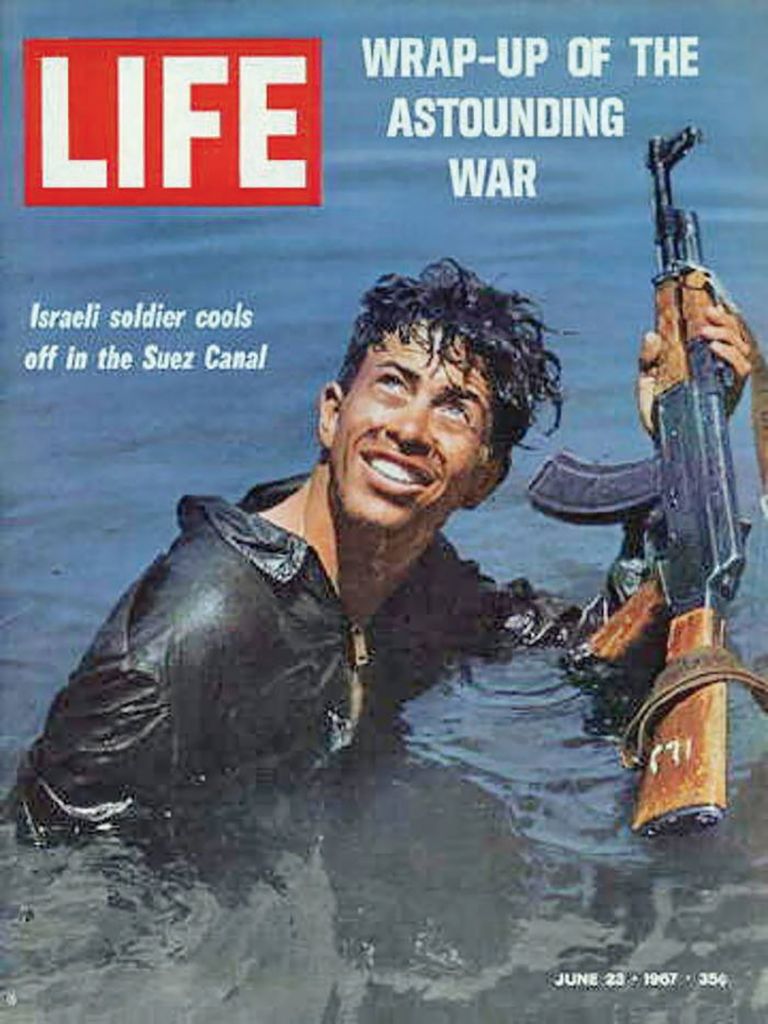 The euphoric mood of the nation is captured well in a short article that appeared in today’s Washington Post. In it, war correspondent Dan Kurzman describes hitching a ride with IDF troop reinforcements on their way to fight in Syria when they were informed that instead they’d be marching through the streets of Jerusalem in a victory parade:

Busloads of tough, bearded soldiers were tense and grim as they headed for their take-off point…Word passed from bus to bus that the vehicles were turning around. ‘Who in the hell are we supposed to fight now?” asked one soldier. ‘Nobody,” someone yelled. ‘Syria has agreed to a cease fire. War is over and we’re going back to Jerusalem. Suddenly pandemonium broke out…Everybody poured out into the road…Soldiers who had hardened their moods to bloody battle began acting like children, slapping each other on the back, running piggy-back with their buddies…The atmosphere was electric, bristling with joy, pride and a sense of utter unreality. The Israelis still could not believe that they had achieved all of their military objectives in the space of less than a week.” 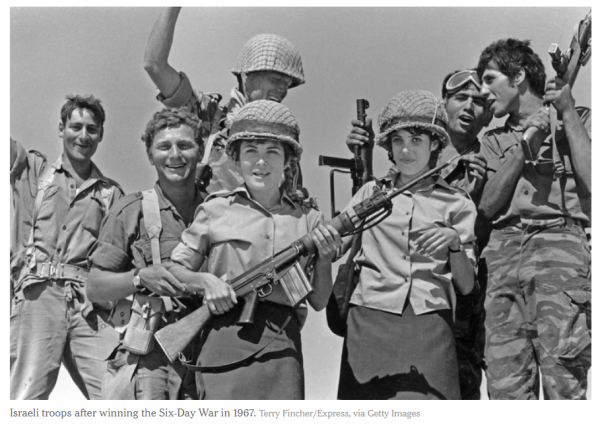 Jews are reunited with their heritage

Based on the statements we’ve heard today in the media, there’s no indication that Israel’s government will agree to return to a divided Jerusalem or to the 1949 armistice lines.

As Israel’s Minister of Information bluntly put it today:

Israel cannot agree to return to the status quo before this happened.”

This is an important accomplishment of the war. It effectively means that Jews will be able to settle in the important regions of the homeland (Judea and Samaria), which were illegally annexed by Jordan after the 1948 war.

Basically, there’ll be a “reuniting of the State of Israel with the Land of Israel” (after all Haifa isn’t in the Bible, but Hebron, Jericho, and Shechem are).

Winning this week’s war has given Jews unfettered access to their holy sites and to a unified Jerusalem—the nation’s ancient capital. For the first time in years Jews will now be able to freely worship in Jerusalem’s holy places. They will walk through the streets of Israel’s united capital city as members of the sovereign Jewish nation—for the first time in 2,000 years. 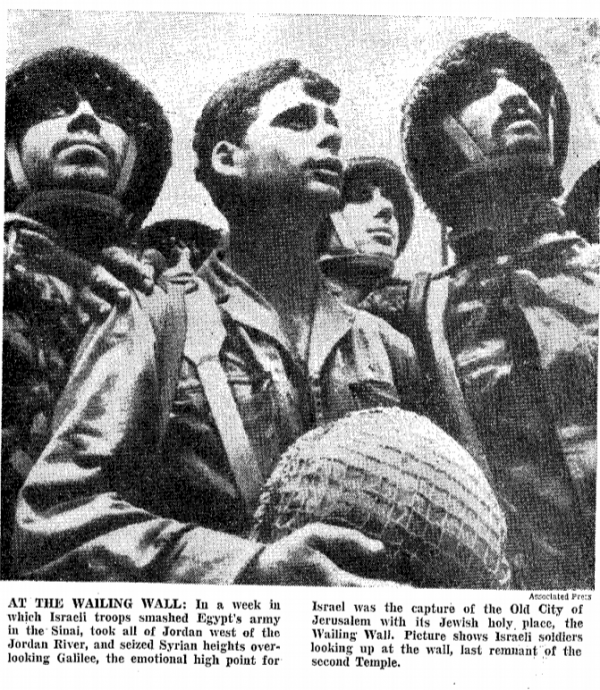 In the 1949 armistice agreements drafted after the War of Independence, Jordan was obligated to allow Israelis access to their holy sites in the Old City and the eastern part of Jerusalem. But as we noted in our prior posts, the Jordanians refused to honor these commitments and gradually the Arab Legion destroyed dozens of synagogues in the Jewish Quarter and all but completely demolished the whole neighborhood.

No Jew was able to visit the Western Wall for 19 years.

So now we’re hearing that the government is preparing for some 200,000 visitors to stream to the Western Wall (the Kotel) on the high holiday of Shavuot, which takes place in only a few days. For most, it will be their first time there—an unforgettable experience that they’ll no doubt remember for the rest of their lives. 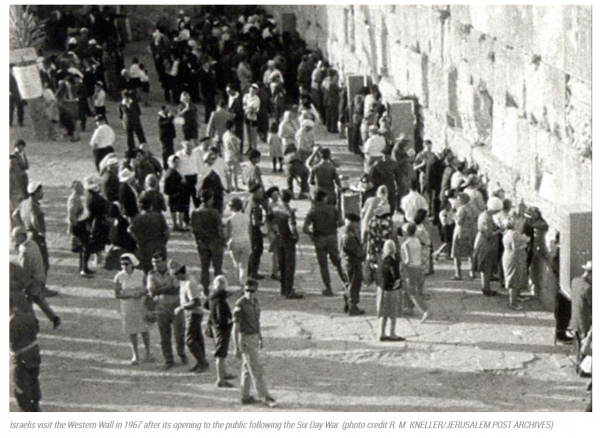 Today Israel probably became one of the few nations in world history to emerge victorious in war only to instantly offer the enemy its hand in peace.

We’ve heard that Israel’s government is saying that “everything is negotiable”—including a return of the territories conquered from Egypt and Syria in exchange for peace, security and recognition.

The great war hero—Defense Minister Moshe Dayan—has himself publicly quipped that he too is “waiting for a telephone call” from Arab leaders.

The #ceasefire agreed earlier today now goes into effect. The #sixdaywar is over. The battle for #peace begins immediately. #statecraft

The Arab League will soon be convening, and we suspect that they’ll categorically reject peace with Israel.

But perhaps in time, these six days of war will convince some Arab leaders that Israel isn’t weak and so trying to remove it by force isn’t a realistic option. That is, the very fact of Israel’s astounding victory this week may prove a key factor in driving at least parts of the Arab world to confront the reality of Jewish statehood.

This week Israel launched a defensive war, fought valiantly on three fronts, and staved off what would have surely been another massacre of the Jewish people.

Thanks to this war, Israel is no longer only 9 miles wide and vulnerable to her enemies, and Jerusalem is now open to all of the world’s faithful. These six days of war have also given Israel large chunks of territory that can eventually be traded for peace—once her Arab neighbors are prepared to negotiate a settlement.

All that is reason enough to rejoice.

But this is the key reason that Israel’s astounding victory over three Arab armies this week should be celebrated:

Twenty-two years after Jews were murdered in Europe’s killing fields and burned in its crematoria, the “swiftness and decisiveness” of Israel’s military victory this week, and the complete routing of its enemies, puts the “lie to Jewish defenselessness.”

The #sixdaywar is over. Our brave soldiers have changed the course of history, The Jewish people stands tall and proud.

#Israel is safe and my #dream is secured. Appreciating the beauty of Israel today. #sixdaywar pic.twitter.com/2Gbw5WXxI2

Since when do Israeli soldiers cool off with their AK-47s?

Thanks, Miriam, for the great series.