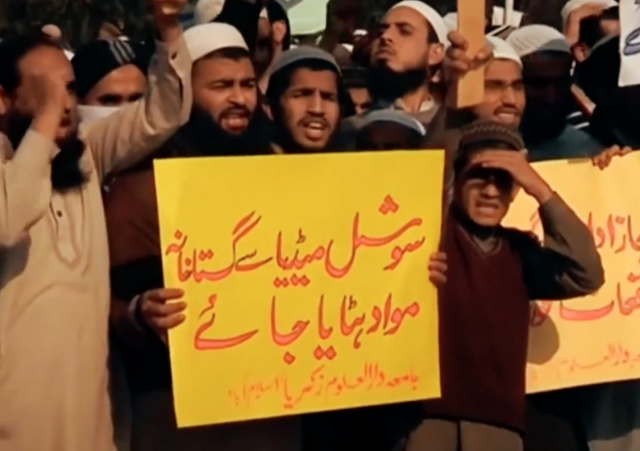 “Blasphemous” social media posts can get you killed in Pakistan.

The first of its kind in the middle eastern state, Pakistan recently sentenced a man to death for making “derogatory” remarks about “Sunni religious figures and the prophet of Islam’s wives,” reports leading German news purveyor, DW.

Taimoor Raza, a Shiite Pakistani, was charged and sentenced to death for engaging in a Facebook argument with a government official who later brought charges against him.

A counterterrorism court handed down Saturday the verdict to Taimoor Raza, a Shiite Pakistani from the eastern city of Okara, for posting “derogatory” remarks about Sunni religious figures and the prophet of Islam’s wives.

Defense lawyer Rana Fida Hussain told the Agence France-Presse news agency that Raza had an argument on Facebook with a government official, who brought charges against his client in the court.

Hussain said that Raza, who was arrested in April last year, was innocent and that he would appeal against his client’s death sentence.

Blasphemy is a sensitive topic in the Islamic Republic of Pakistan, where around 97 percent of its 180 million inhabitants are Muslim. Rights advocates have long been demanding a reform of the controversial blasphemy laws, which were introduced by the Islamic military dictator General Zia-ul-Haq in the 1980s.

Activists say the laws have little to do with blasphemy and are often used to settle petty disputes and personal vendettas.

Raza’s case is not the only one to spark national outrage. In April, journalism student Mashal Khan was brutally beaten to death and lynched by an angry mob over allegations of blasphemy. The gruesome, bloody murder was videoed and posted online.

Dissenters, including “liberal bloggers”, have vanished (many suspect government forces at work) and just as many liberals and secularist have been killed.

Government critics and secular writers in Pakistan fear religious extremists and the government alike when it comes to blasphemy allegations, which are enough to put them in prison or get vigilante mobs to lynch them.

After Bangladesh witnessed a spate of killings of secular activists, Pakistan is experiencing a government crackdown on liberal bloggers, journalists, academics and activists. At the same time, religious fanatics are targeting secular social media activists, who have to go into hiding or self-censor to save their lives.

The “abduction” of liberal bloggers in January – allegedly by Pakistan’s security forces – and the recent lynching of a secular journalism student shocked activists and the journalist community in Pakistan. There has been increased social media vigilantism, which is forcing critics of the government and military as well as human rights activists to censor their thoughts and words.

Activists claim it’s all part of a massive government witch-hunt:

Pakistan is already one of the most dangerous countries for journalists, but the blasphemy issue has made it even more dangerous for them. Earlier this year, Interior Minister Chaudhry Nisar Ali Khan threatened to block all social media websites with “blasphemous content.”

“The crackdown on dissidents is actually a political witch hunt,” Arshad Mahmood, a Pakistani writer and social media activist, told DW. “Those who are critical of the state and the military are being picked up by the government agencies. I wish the authorities had shown the same enthusiasm in targeting Islamist militants,” Mahmood added.

Despite threats to their lives, journalists and activists in Pakistan refuse to give up the fight. They say they would continue to strive to report and express their views independently.
“Civil society needs more unity now to protect freedom of speech. In the age of social media, independent thinkers have a platform to voice their concerns against certain actions of the government, and it is their right,” Nahyan Mirza, an Islamabad-based development professional, told DW.

Mahmood may be right, but it seems to this outsider to be nothing more than the enforcement of Sharia, under which blasphemy is indeed a capital crime. Note that “elements” of Sharia are included in Pakistani law.

I like how the western media sources won’t report what “blasphemous” words the accused used, because they’re afraid they will be accused of blaspheming the prophet too, and thus make themselves targets of violence from all those “peaceful” Muslims living in western societies.