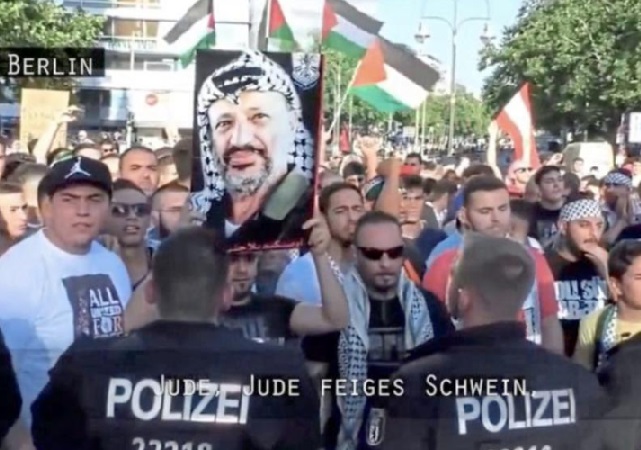 Despite the risk of litigation, the German newspaper Bild Zeitung has gone ahead with the streaming of an investigative documentary that exposed the extent of Antisemitism in Europe. The French-German broadcaster ARTE had previously shelved the 90-minute documentary that uncovered the complicity of the European Union and Germany government in financing antisemitic groups posing as charities and NGOs. On Tuesday, the German language documentary was streamed for 24 hours on the newspaper’s website.

French-German ARTE and German broadcaster WDR, both funded by German taxpayers, commissioned the documentary “Chosen and Ostracised — The hatred of Jews in Europe,” but got cold feet after seeing the finished work. The broadcasters confined the documentary to the archives, hoping to dodge a bitter public reception.

Bild Zeitung justified the streaming of the documentary that shows the state of Antisemitism in today’s Europe, saying “Germany is certainly not the country where antisemitic prejudices should be glossed over, covered up, whitewashed. Our historic responsibility compels us to resolutely confront the unspeakable [things] shown in this documentary. In order to do so, we must know what we are dealing with.” 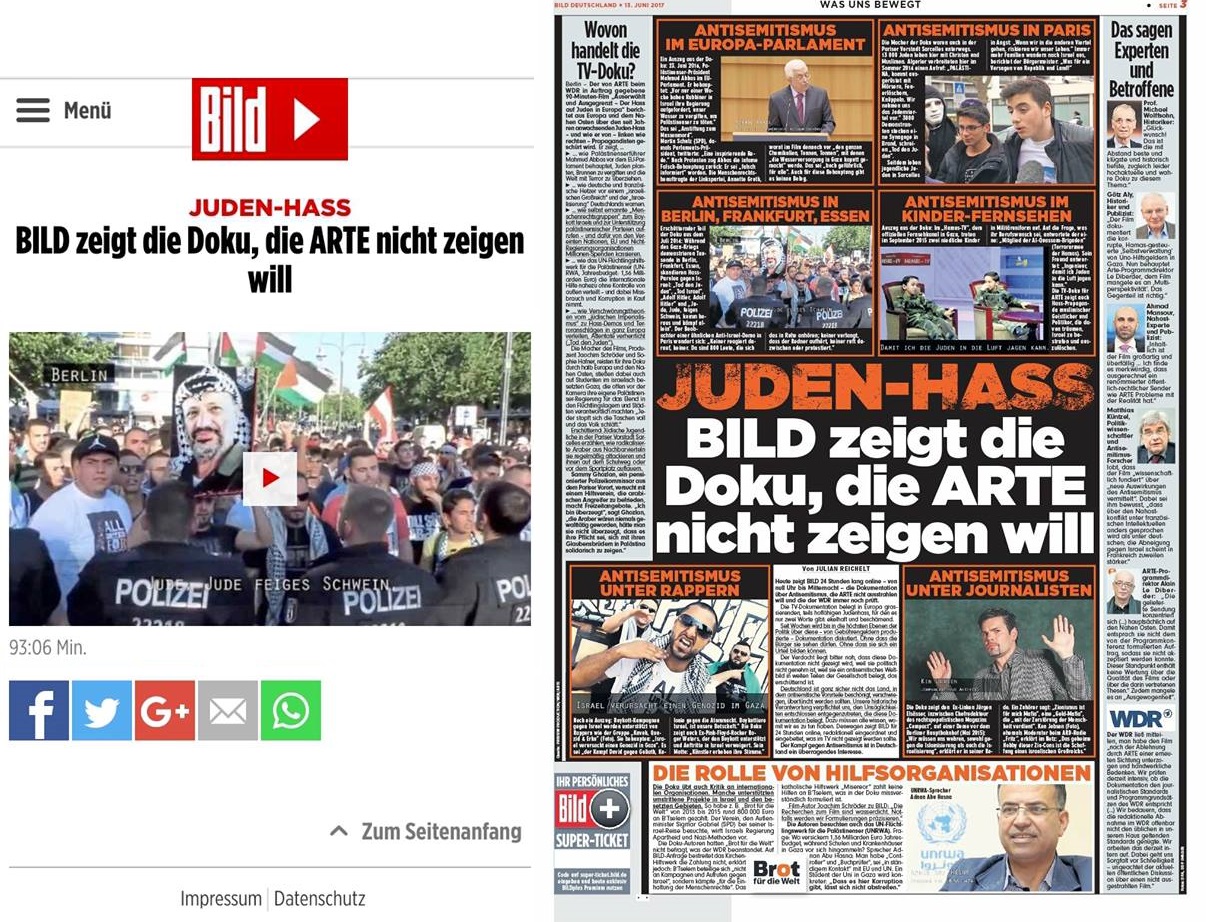 On the role of the European Union, Bild Zeitung wrote:

An excerpt from the documentary: June 23, 2016, Palestinian President Mahmoud Abbas at the EU Parliament. He claims, “A week ago, rabbis in Israel called their government to poison our water, in order to kill Palestinians.” This should be “incitement to genocide.”

Martin Schulz (Germany’s Social Democratic Party), at that time (serving as) the President of the Parliament, tweeted, “An inspiring speech.” After protests, Abbas retracted his disgracefully wrong accusation: He had been “misinformed”. The Human Rights Commissioner for the [Germany’s] Left Party, Annette Groth, could be seen in the film warning of “all the chemicals, tonnes and tonnes,” that has been used to “destroy Gaza’s water supply.” That is “highly dangerous for everyone.” There is no proof for these claims either.

The newspaper talked about the role of German journalists in inciting Jew hatred:

The documentary shows former leftist Jürgen Elsässer, meanwhile the editor-in-chief of right-wing magazine “Compact”, at a rally outside Berlin’s Central Station (May 2015): “We must fight against Islamisation as well as [against] Israelisation,” he explained in a speech.

A listener said, “For me Zionism is a mafia”, a “money mafia” that “profits on the destruction of the humanity.” Ken Jebsen, the former show host at the [German public broadcaster] ARD radio “Fritz” said in internet, “The secret hobby of Zio-Cons is to create an Israeli Empire”

On the role of European NGOs, Bild Zeitung writes:

When asked by Bild Zeitung, the Christian charity [Brot für die Welt] did not deny making the payment, it however explained that B’Tselem is not involved in “campaigns and appeals against Israel” but fights “for the observance of Human Rights.” (…)

Question: Where does the annual budget of €1.36 billon end up, while the schools and hospitals in Gaza are rotting away? Spokesperson Adnan Abu Hasna: We have “controllers” and “auditors,” are “in constant touch” with the EU and UN.

The documentary also covers the Antisemitism on the streets of France and Germany:

The documentary makers travelled through the Paris suburb of Sarcelles. Here 13,000 Jews live among Christians and Muslims. Algerians spread a call in the summer of 2014: “PALESTINE, come armed with mortars, fire extinguishers, [and] clubs. We will take the Jewish quarter.” 3000 demonstrators set the synagogue on fire, and scream “death to the Jews.”

The shocking part of the documentary is from July 2014; During the Gaza War, thousands demonstrate in Berlin, Frankfurt and Essen — chanting slogans against Israel, “Death to the Jews,” “Adolf Hitler, Adolf Hitler,” and “Jews, Jews, cowardly swine; come out and fight alone.”

An observer at a similar anti-Israel demonstration wonders in Paris, “Nobody takes action, nobody. There are 800 people listening quietly and no one calls for the speaker to stop, no one calls them out or protests.”

This is the sad and sorry reality that Germany’s state-funded broadcasters do not want their viewers to see. Europe’s political and media establishment thinks it can wish way the rising spectre of Antisemitism, particularly within its growing Muslim population, by burying its heads in the sand.

Unlike the German public broadcasters, who decided to suppress the ugly truth about Antisemitism, German newspaper Bild Zeitung has made the right decision by opening the debate about the extent of Antisemitism in today’s Europe and the complicity of the European institutions in funding this antisemitic hate.

According to Bild Zeitung, the documentary was viewed 200,000 times and the newspaper received 650,000 queries related to the film. If the broadcasters were trying to dump the documentary, it has backfired on them in a big way.

Raw video: Antisemitic demonstrations in Germany during the Gaza Conflict of 2014:

Increasing Anti-Semitism (which is just a more polite way of saying Jew Hatred) in Germany.

And huge increases in Muslims, first from the post-war Turkish Gastarbeiter programs, then from an increasing Muslim population of those guest workers and their families who decided to stay on in Germany, and now from Merkel’s insane intent to destroy German culture utterly with millions of Muslims who, because of their political religion, have Jew Hatred built in.

Now, this is only a tentative thought, but perhaps, just maybe, there’s a connection between having millions Jew-hating Muslims just hanging around and the rise of Jew Hatred in Europe.

And perhaps too Germany is readying itself for certain 100-year celebrations.

On Sept 12, 1919, the little corporal, as one of its earlier members, joined the DAP, rising rapidly to leadership positions.

Point 18 of those 25 points states, “We demand that ruthless war be waged against those who work to the injury of the common welfare. Traitors, usurers, profiteers, etc., are to be punished with death, regardless of creed or race.”

Sound familiar? “9:5 When the sacred months are over slay the idolaters [that means anyone who’s not a Muslim] wherever you find them. Arrest them, besiege them, and lie in ambush everywhere for them. If they repent and take to prayer and render the alms levy, allow them to go their way. Allah is forgiving and merciful.”

This explains Merkel and her gang’s bizarre motivations pretty well, doesn’t it?

“Now, this is only a tentative thought, but perhaps, just maybe, there’s a connection between having millions Jew-hating Muslims just hanging around and the rise of Jew Hatred in Europe.”

The above from commenter fscarn is exactly what I have commented here before. Look at the university anti-Israel group protests here in the US and you will see several swarthy bearded Arabic looking males holding the hate signs. This is not a maybe but a fact. Europe may have reached the tipping point for all Jews because of the influx of the hate-filled muslims. This is a sickness that defies logic. How can anyone hate someone else if they do not even know them? muslims are raised on this hate and I am not sure if anything can eliminate it.

If we continue to accept muslims into the west, we are signing oour own death warrant.
Islam is not a religion as we know the term.it is a desert invaders creed to justify murder and mayhem. The adherents use taqqiyah to lie and pretend to be patriotic citizens.
how can you believe anything said by them ?

Why don’t people read history. The US in the time of Jefferson was paying 10% of our annual budget to pay off Muslims not to enslave our sailors. This has gone on for hundreds of years. Secular Muslims are fine, but the religious are dangerous to western civilization.