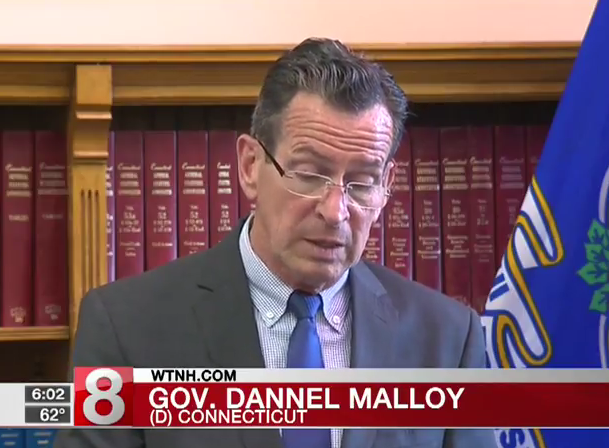 Connecticut governor Dannel Malloy (D) is facing a situation that may make him reconsider his position on taxing the wealthy.  Aetna insurance company, based in Hartford since 1853, is looking for a new state to call home, a state that is more business-friendly in terms of taxation.

Having lost GE to Boston last year due to the massive tax load piled on businesses, Malloy is desperate to keep Aetna in Connecticut, but it may be too little, too late.

The Aetna insurance company has been based in Hartford, Conn., since 1853, but this week it said it is looking to move to another state. Governor Dannel Malloy has pledged to match other states’ financial incentives, but taxpayer money can’t buy fiscal certainty and a less destructive business climate. That’s the real problem in Connecticut, which saw GE vamoose to Boston last year and which even Mr. Malloy now seems to recognize.

“As a huge Connecticut employer and a pillar of the insurance industry, it must be infuriating to feel like you must fight your home state policymakers who seem blind to the future,” Mr. Malloy wrote in a May 15 letter to Aetna CEO Mark Bertolini. “The lack of respect afforded Aetna as an important and innovative economic engine of Connecticut bewilders me.”

Now he tells us. Gov. Malloy has spent two terms treating business as a bottomless well of cash to redistribute to public unions. Now that his state is losing millionaires and businesses, he has seen the light. But the price of his dereliction will be steep.

Connecticut has lost tax revenue at a predictable rate since its governor began enacting crippling “tax the rich” policies in the state.

The problem, as always with such “sound good, feel good” policies of the regressive left, is that companies are under no obligation to stay put and shell out billions; they can pick up shop and move elsewhere to enjoy lighter taxation.

Last month the state Office of Fiscal Analysis reduced its two-year revenue forecast by $1.46 billion. Since January the agency has downgraded income-tax revenue for 2017 and 2018 by $1.1 billion (6%). Sales- and corporate-tax revenue are projected to fall by $385 million (9%) and $67 million (7%), respectively, this year. Pension contributions, which have doubled since 2010, will increase by a third over the next two years. The result: a $5.1 billion deficit and three recent credit downgrades.

And it’s not just businesses leaving Connecticut under the strain of high taxes, individuals are doing so, as well.

According to the fiscal analyst, income-tax collections declined this year for the first time since the recession due to lower earnings at the top. Many wealthy residents decamped for lower-tax states after Mr. Malloy and his Republican predecessor Jodi Rell raised the top individual rate on more than $500,000 of income to 6.99% from 5%. In the past five years 27,400 Connecticut residents, including Ms. Rell, have moved to no-income-tax Florida, and seven of the state’s eight counties have lost population since 2010. Population flight has depressed economic growth—Connecticut’s real GDP has shrunk by 0.1% since 2010—as well as home values and sales-tax revenues.

Malloy, whom the WSJ calls a “slow learner,” is finally getting it.  He’s resisting further tax increases and seeking $1.6 billion in union concessions.

The Governor—a slow learner—seems finally to have accepted that raising taxes on the wealthy is a dead fiscal end. Democrats are now proposing higher taxes on tobacco, expanding casinos and eliminating some tax breaks, though they don’t want to touch an exemption for teacher pensions. The state teachers union warns that axing the exemption would impel retired teachers to relocate. A quarter of pension checks are currently sent out of state.

Mr. Malloy is also seeking $1.6 billion in concessions from unions, which would be easier to achieve if collective bargaining weren’t mandated by law. He’s suggested increasing municipal pension contributions and cutting state-revenue sharing, both of which could drive up property taxes and imperil insolvent cities like Hartford. Mr. Malloy’s budget includes a $50 million bailout for Hartford to prevent bankruptcy, which might occur in any case if Aetna—its fourth largest taxpayer—leaves.

Wherever Aetna and Connecticut’s disgruntled, over-taxed wealthy land, those of us in more business-friendly, less-taxed states think it best that they leave the politics that created these problems behind.

Reason #14,301 why Connecticut is boned, and it’s in the WSJ article, though they treat as if it’s something everyone knows:

The retired teachers in Connecticut are given an tax exemption on part of their retirement income. See it here:

You read it correctly — after 2017, half the pension a teacher receives is exempt from state income tax.

Imagine the future in about 20 years, when Connecticut is broke and a majority of voters are black or brown (most affluent whites having left for more friendly areas)

What do you think they’ll do?

Squads of police and accountants visiting each state resident reporting a positive income for the year demanding they be shown each asset the resident owns, then demanding a tith from each asset. If you have to sell your home in order to pay, so be it.
So many votes to buy, so few revenues. Theme song of the Democrats in Hartford.
Somewhere about 2005, the Democrats laid a one per cent surcharge on North East Utilities, the state’s largest electricity supplier, then the next day the Public Utility Control authorized a one per cent increase in utility rates for NU. The biggest complaint overheard from customers coming through the store was about “That GD North East Utilities raising their rates again”
Nice little sleight of hand there. Never laid a glove on the Democrats

The argument is that without the tax break, retired teachers will leave the state, depriving the state of 100%, not 50%, of their income tax.

Of course, this does not deal with the fact that the argument applies equally to any pensioner. See, e.g., ex-Governor Rell, who is now spending her untaxed pension is sunny Florida.

The honest argument is – the teachers’ union is one of the most powerful political forces in the state, basically an arm of the Democrat Party, so shut up!

The Commentocracy is being too hard on the guy. He’s not making any mistake that the Federal government hasn’t been making for many decades. And that is the failure to realize that when it becomes too expensive to conduct business in one location, companies move to another location. They move from Connecticut to Massachusetts; or from the United States to wherever—Mexico, Singapore, wherever mandated expenses are less extreme.

Soaking the rich works – until you run out of rich people.

Apparently Gov. Malloy thinks or believes he lives in a glass house. He should be concerned with the amount of Jobs he has taken from People lately.
Lets watch the outcome.