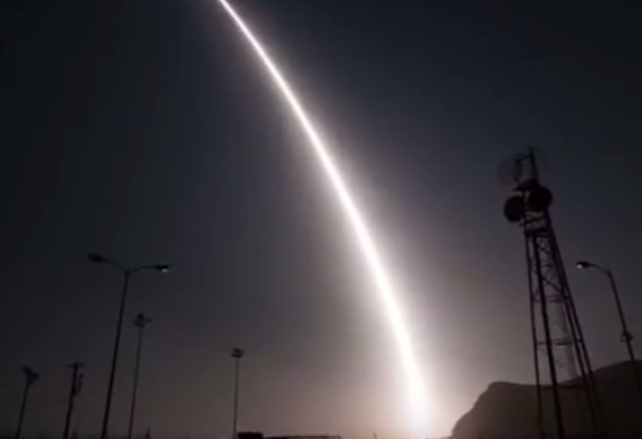 Californians who were awake early Wednesday morning were treated to the site of a test launch by the US Air Force of an unarmed intercontinental ballistic missile.

Air Force Global Strike Command spokesman Joe Thomas told AFP from California that the test was routine and not meant to be a show of force in the standoff with North Korea over its nuclear and ballistic missile program.

The Minuteman III missile blasted off from Vandenberg Air Force Base at 0702 GMT, the strike command said in a statement.

The missile traveled some 4,200 miles (6,700 km) and went down near a Pacific Ocean atoll that is part of the Marshall Islands and features a US military ballistic missile test site.

The Minuteman III, capable of being fitted with a nuclear warhead, is tested like this about four times a year. This test comes on the heels of an earlier one, held one week ago.

Last week’s launch had been delayed from the fall.

The launches came amid U.S. expressions of concern about North Korea’s nuclear capability.

New missile tests by North Korea and its progress toward developing a nuclear weapon capable of hitting the United States have made the isolated communist dictatorship one of the top U.S. national security concerns.

Meanwhile, an analysis has been done on the most recent failed North Korean missile test. It appears that it was heading towards Russia before it was detonated mid-flight.

US officials said a medium-range ballistic missile was fired from a region north of the capital of Pyongyang and disintegrated minutes after launch.

The missile was likely to be a medium-range KN-17 ballistic missile, they added, which broke up and fell into the Sea of Japan and did not leave North Korean territory.

The Seoul Economic Daily reports the missile travelled 48 kilometres before officials detonated it over fears it was fired at Russia by accident.

The paper claims: “If the ballistic missile that flew to the northeastern region had not failed, it would have been a harbour point or a Russian territory.

“It is for this reason that North Korea intentionally destroyed the missile.”

North Korea seems to have taken a page from China’s playbook. Satellite images show that the rogue nation has built islands in the Yellow Sea and capped them with military installations.

The images show that North Korea has been working for at least five years on the islands near Sohae, about 70 miles northwest of Pyongyang, the capital. Sohae is known as a testing site for intercontinental ballistic missile technology.

As late as 2012, three of the islands, which are scattered around a small peninsula jutting into the Yellow Sea, were rocky, tree-studded specks; two were patches of sand. In Google Earth images from December 2016, all appear to contain features consistent with military installations, such as wide roads and paved, rectangular lots. All are in North Korea’s waters, close to the country’s shoreline.

Good. Because we are in danger of killing our nuclear capability through negligence.

… went down near a Pacific Ocean atoll that is part of the Marshall Islands and features a US military ballistic missile test site.

That’d be Kwajalein Atoll. As the Air Force has been doing for many years; a completely routine test.

Or intended to look like a completely routine test.

If North Korea wants an ICBM and nuclear warhead… let’s give them one… or rather parts of one… such as the endstage re-entry vehicle. Admittedly, there wouldn’t be much of one left after the air burst, but maybe they could scrounge up some of its parts as they scrounge around for what if left of the Nork capital. Sort of “Fat Man” meets “Fat Boy”.

So the Flintstones can pour concrete like a champ, but still can’t master directional flight. Not terribly impressive. Gotta wonder how many of Dear Leader’s best and brightest aeronautical geniuses are executed after each failure.

It’s interesting you say that. After 1917 the horribly misnamed Bolsheviks revolted and introduced revolutionary terror
we got the Sanders/Maduro policy of strict income equality.

Look yourselves in the mirror. If you couldn’t make more than some factory worker, why would you take on the job of running the place with the threat of torture and imprisonment?

I know I’m quibbling, but the PRC is building islands in the South China Sea, not the Yellow Sea.

I was initially confused by the reporting as well. But this is about what the NORKs are doing in the Yellow Sea, off its west coast between the peninsula and China.