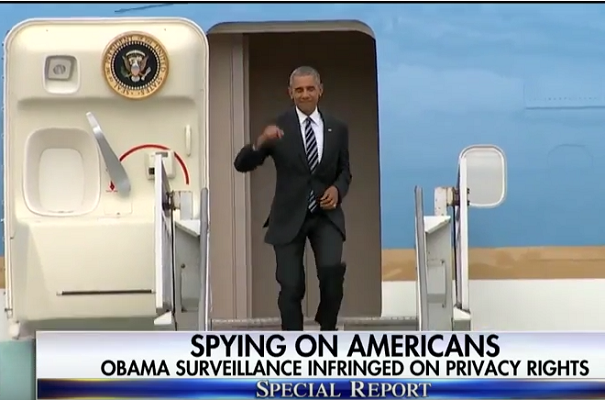 According to previously classified documents, this admission of methodical and long-term violations of Americans’ Constitutional rights was made on October 26th of 2016.

The National Security Agency under former President Barack Obama routinely violated American privacy protections while scouring through overseas intercepts and failed to disclose the extent of the problems until the final days before Donald Trump was elected president last fall, according to once top-secret documents that chronicle some of the most serious constitutional abuses to date by the U.S. intelligence community.

More than 5 percent, or one out of every 20 searches seeking upstream Internet data on Americans inside the NSA’s so-called Section 702 database violated the safeguards Obama and his intelligence chiefs vowed to follow in 2011, according to one classified internal report reviewed by Circa.

The Obama administration self-disclosed the problems at a closed-door hearing Oct. 26 before the Foreign Intelligence Surveillance Court that set off alarm. Trump was elected less than two weeks later.

The normally supportive court censured administration officials, saying the failure to disclose the extent of the violations earlier amounted to an “institutional lack of candor” and that the improper searches constituted a “very serious Fourth Amendment issue,” according to a recently unsealed court document dated April 26, 2017.

From the FISA Court ruling: 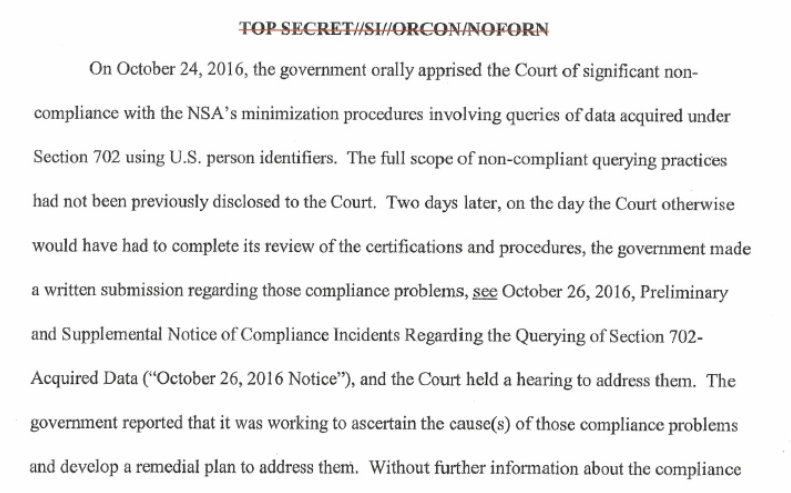 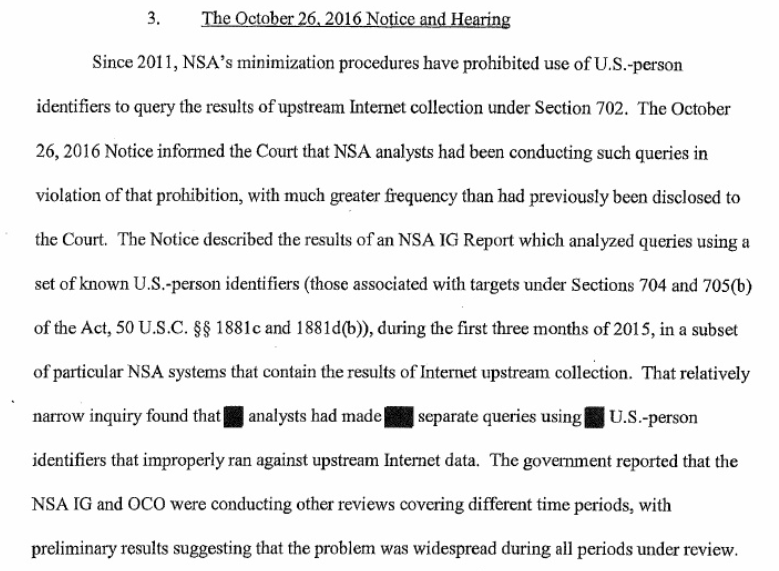 Upstream collections refers to data routes between computer networks as opposed to those communications intercepted by Internet service providers.   Even these collections and the distribution of collected and unmasked data, however, are not permitted to be handled in a manner that violates Americans’ Fourth Amendment privacy rights.

As the FISA court explains, upstream collection refers to the interception of communications “as they transit the facilities of an Internet backbone carrier.” These are the data routes between computer networks. The routes are hosted by government, academic, commercial, and similar high-capacity network centers, and they facilitate the global, international exchange of Internet traffic. Upstream collection from the Internet’s “backbone,” which accounts for about 9 percent of the NSA’s collection haul (a massive amount of communications), is distinguished from interception of communications from more familiar Internet service providers.

Upstream collection is a vital tool for gathering intelligence against foreign threats to the United States. It is, of course, on foreign intelligence targets — non-U.S. persons situated outside the U.S. — that the NSA and CIA are supposed to focus. Foreign agents operating inside the U.S. are mainly the purview of the FBI, which conducts surveillance of their communications through warrants from the FISA court — individualized warrants based on probable cause that a specific person is acting as an agent of a foreign power.

. . . . In a nutshell, it is not possible to capture a single e-mail related to a single target as it transits the backbone routes (or “switches”) that connect networks. The NSA must instead capture packets of e-mail data — which include lots of e-mails beside the targeted e-mail. It sifts through these packets, finds and assembles the components of the email it was looking for, and then discards the rest. (A New York Times report by Charlie Savage earlier this week, in connection with a different FISA issue, provides a good explanation of this process.

By contrast, the relevant discussion in the FISA court opinion of “multiple communications transactions,” or MCTs, is brief and heavily redacted — see the opinion at 15–16.) Even if the NSA does exactly what it is supposed to do (i.e., sift and discard), this means American communications are being seized and subjected to an inspection — however cursory — in the absence of any warrant, probable cause, or foreign-intelligence relevance.

According to Circa, the ACLU responds to the “appalling lack of oversight” in our nation’s intelligence agencies.

The American Civil Liberties Union said the newly disclosed violations are some of the most serious to ever be documented and strongly call into question the U.S. intelligence community’s ability to police itself and safeguard American’s privacy as guaranteed by the Constitution’s Fourth Amendment protections against unlawful search and seizure.

“I think what this emphasizes is the shocking lack of oversight of these programs,” said Neema Singh Guliani, the ACLU’s legislative counsel in Washington.

If you’ve noted that this is not being covered by the mainstream media, you’re not alone.

The lack of coverage by the Big Three, and the liberal media in general shows their bias against Trump and their favoritism to Obama. They rather focus on alleged accusations that so far have bared little fruit, instead of the legal opinion of federal judges exposing the highly illegal actions of a segment of President Obama’s administration.

I have mentioned this before. The improper/illegal surveillance of American citizens by the Obama administration is HUUUGGGEEE. If the quoted article is accurate, this has been going on since the the first Obama administration, prior to its agreement to handle “intercepted” communications of American citizens in a specific manner. A manner which they failed to follow as late as 2016. If this had happened in either Bush administration, the Reagan administration or, heaven forbid, the Nixon administration, reporters would be meeting with “Deep Throat”, “Sword Swallower”, “Tonsil Hockey” and “BoBo the Wonder Chimp” in parking garages all over DC to receive leaked information on this practice. Instead all we hear are crickets. Adm. Rogers already made a deal with Trump about this. Comey, who is in the thick of it, is now an outsider and is being set up as the Oswald here, by the other members of the Obama Administration. Clapper and Brennan are changing their stories and having trouble keeping them straight. And, still the press, especially the MSM, is studiously ignoring this whole matter.

How can Mueller appropriately investigate the Russian Hoax , with all the surveillance questions when he was involved in the questionable surveillance the report went back to 2011.

Can anyone here comment on whether we should flood congress for his recusal?

One aspect of this article I was very pleased to see–real evidence in the form of the declassified FISA court ruling. Not “sources/officials” whose motivations and accuracy we can only guess at. A real disprovable fact–the ruling itself.

Nowadays when I read an article that quotes anonymous sources I just put it down and ignore it. It is a pleasure to read a story with attributable facts.

Cue the sound of crickets chirping.

What did Valerie Jarrett know, and when did she know it?