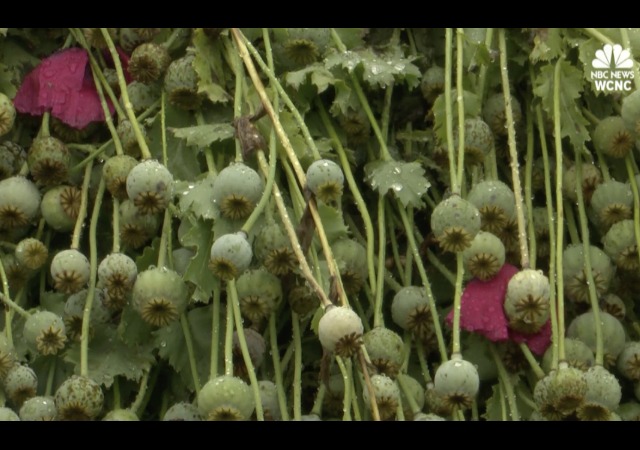 Holy cow! A sheriff deputy in North Carolina accidentally discovered an opium poppy field worth around $500 million. From NBC News:

The plants, which are used to make opium, morphine and heroin, were found on an acre of land near the town of Claremont, some 40 miles north of Charlotte.

“All total investigators removed and seized over 2,000 pounds of opium poppy plants found growing on the property along with multiple firearms and ammunition,” the Catawba County Sheriff’s Office said in a statement to NBC News.

“One of our narcotics investigators came to the house looking for something else,” Catawba County Sheriff Coy Reid told the Hickory Daily Record. “When he knocked on the door, the guys said, ‘I guess you’re here about the opium.'”

And there behind the house, was row after row of poppy plants.

Cody Xiong, 37, was arrested at the farm Tuesday and charged with two felonies — manufacturing a Schedule II drug and trafficking in opium, police said. He was later released after posting $45,000 bail.

There are lots of types of poppies, but only papaver somniferum is the one that produces opium.

There is a herb garden at the National Arboretum in Washington DC that had these poppies in the medicinal herb section of the garden. Or at least they used to grow that herb….

This is so stupid. Where does Morphine come from? Oh, that’s right, from opium poppies. I guess American hospitals prefer to buy their Morphine from Afghanistan.

you expect that this dimwit was growing this crop for non self medicinal purposes ?
jes askin, doncha know.