Trump: “I have come to this sacred and ancient land to reaffirm unbreakable bond between us and Israel.” 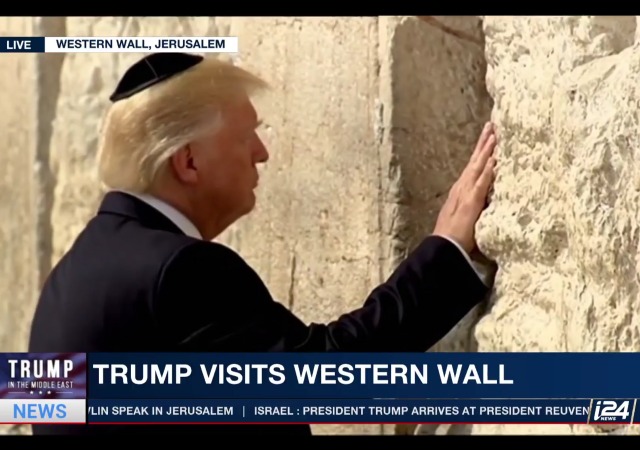 President Donald Trump has arrived in Israel, which he will visit for two days. In fact, his flight to Israel from Saudi Arabia is the first non-stop flight between the two countries that have no diplomatic ties.

We will publish updates on Trump’s visit, a truly historic one since Israel remains our most important ally in the Middle East. Israeli President Reuven Rivlin and his wife Nechama and Prime Minister Netanyahu and his wife Sara greeted Trump and First Lady Melania Trump as the two descended from Air Force One.

Sara Netanyahu: “The majority of the people in Israel, unlike the media, they love us.”

It’s well known that the Netanyahu family likes the Trump family because he knows the importance of the alliance between Israel and America. We also know the media doesn’t like either one of them very much. When Sara Netanyahu met Donald and Melania at the airport, she didn’t hold back:

"The majority of the people in Israel, unlike the media, they love us," Sara Netanyahu overheard telling Pres. Trump https://t.co/iFL7TRgj7l pic.twitter.com/IB8qgRExAH

Trump assured Netanyahu “that the U.S. wants Israel to have peace” and the two countries remain “great allies. He also “pledged to work toward Israeli-Palestinian peace, but admitted it’s the “toughest deal of all.”

Trump also felt “deeply moved” during his visit to the Western Wall. The visit made him the first sitting US president to visit the holiest site in the Jewish faith:

He said “words fail to capture the experience” of visiting the Western Wall.

“It will leave an impression on me forever,” he said.

Netanyahu thanked Trump for America’s change in views in the Middle East, especially on Iran:

“I want to thank you especially today for your deep commitment to Israel’s security, its wellbeing and its future,” Netanyahu said. “I have no doubt that as we work together, you and I, the alliance between our countries will be ever stronger.”

Netanyahu then cited Trump’s strong opposition to Iran’s nuclear program and for taking action against the Assad regime in Syria for using chemical weapons.

“I want to tell you also how much we appreciate the reassertion of American leadership in the Middle East,” Netanyahu said. “I look forward to working closely with you, to confront the dangers we face together in this violent and volatile Middle East.”

Trump and Netanyahu have sat down for a bilateral session in Israel where he told the prime minister he never mentioned Israel during the meeting with Russian officials:

“Just so you understand, I never mentioned the word or the name Israel,” Trump insisted ahead of a bilateral session with Israeli Prime Minister Benjamin Netanyahu.

“You have another story wrong,” he said. 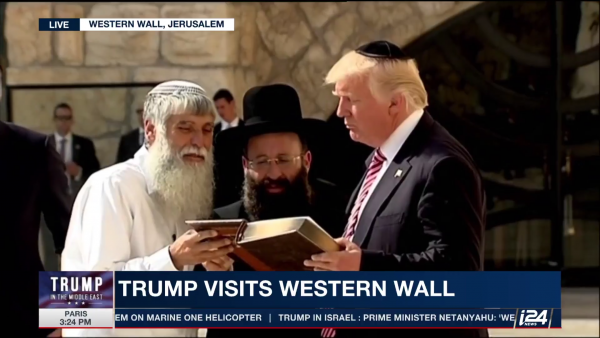 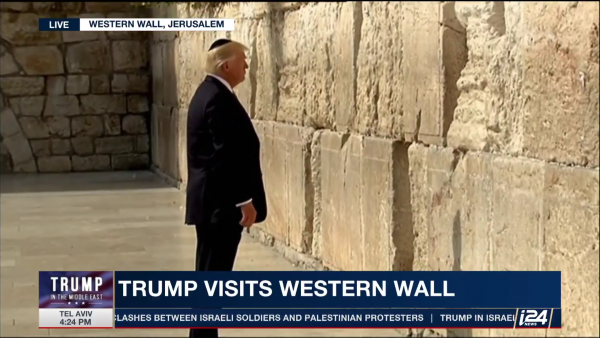 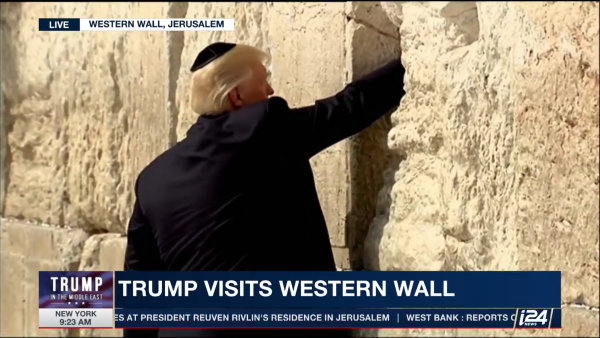 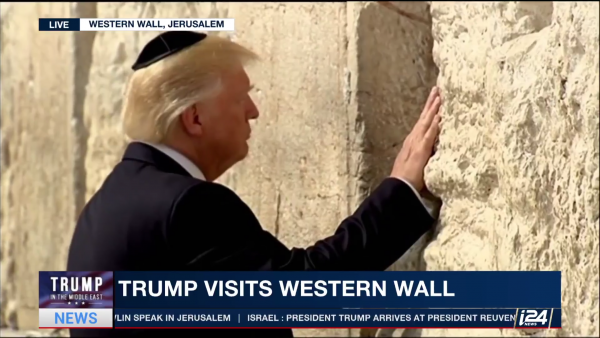 LIVE: President Trump and his family arrive at the Western Wall; the first-ever visit by a sitting U.S. president https://t.co/XDzs6LPxwR pic.twitter.com/zj4jcfC6JT

@FLOTUS at the Western Wall pic.twitter.com/W5JtrMSHVO

President, First Lady Visit the Church of the Holy Sepulcher

Trump and Rivlin held a bilateral meeting. CNN has Trump’s remarks from the meeting: 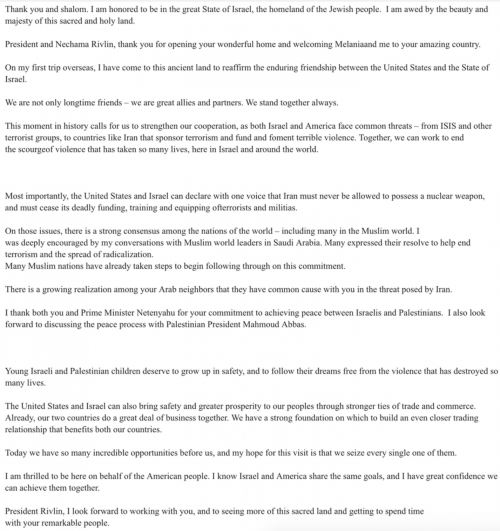 Netanyahu delivered these remarks to Trump after he stepped off the plane. From Haaretz:

Netanyahu said Trump’s visit “is truly historic”: “Never before has the first foreign trip of the president of the United States included a visit to Israel.” He thanked Trump for his “powerful expression of your friendship to Israel.”

He said Israel has been fighting terrorism and protecting members of all faiths, “Christians, Muslims, everyone,” while Christians are being prosecuted elsewhere in the Middle East.

“Israel shares you commitment to peace, we’ve already made peace with Egypt Jordan,” he said. “Israel’s hand is extended in peace to all our neighbors, including the Palestinians. We seek genuine, durable peace in which Jewish state is recognized, security remains in Israel’s hands, conflict ends once and for all.”

He expressed hope one day an “Israeli prime minister will be able to fly from Tel Aviv to Riyadh.”

Haaretz has Trump’s remarks from the tarmac:

“On my first trip overseas as president, I have come to this sacred and ancient land to reaffirm unbreakable bond between us and Israel.”

“In this land so rich in history, Israel has built one of the world’s greatest civilizations, a strong resilient determined prosperous nation, forged in the commitment that will never allow horrors of last century to be repeated,” he said.

Trump said he met with leaders from across the Arab world and reached “historic agreements” in fights against terror. He said there’s a “rare opportunity” to bring security to the region, defeat terror and create harmony and peace, but said “We can only get there working together, there is no other way.”

He concluded by saying “We love Israel, we respect Israel” and conveying warm greetings from the American people.

This is the coverage that should have been in the San Diego Union-Tribune this morning, or tomorrow. If today’s dog’s breakfast from the New York Times is any indication, the latest strategy is to work very hard to substitute flat reporter’s and editor’s political opinion for the actual quotes. Of course, the President did it better, and that is the whole point.

Today’s coverage is about yesterday’s speech, which agains was covered in a far more reportedly manner than in my local newspaper, which draws its national news coverage from the Democratic propaganda sources.

The New York Times was the main source, and it chopped up and re-ordered the topics, supplying spin instead of quotes. It is incoherent and flat.

As a bonus, the Union-Tribune also includes an article claiming that nobody’s opinion has been changed by DJT’s actions in office. It’s a poll, of course, so we all know what kind of accuracy to expect.

Meanwhile, The_Donald at Reddit has enjoyed a jump in both subscribership and and reader activity, with a number of posts from Liberals and Bernie supporters who have been turned off by the obviousness and clumsiness of the spin from the traditional media. This coverage offends people who expect fairness and objectivity in reporting.

Right now, I am looking at anecdotal evidence that the propaganda is backfiring, just as it did in the run-up to the election. Time will tell whether my assessment is correct.

I would appreciate an edit button. I am heartily sick of this stupid autocorrect that inserts gibberish when some pinheaded fool set up a substitution for my own typing. I would prefer my own typos to these constant insertions of bs.

But if they covered this story (and by ‘covered’ I don’t mean ‘with a pillow until it stops breathing’ like they do with many positive Trump stories), they might be forced to take a few column inches away from the latest rumor of a person who might have seen a memo written by an unnamed staffer somewhere in the White House vicinity who saw Putin smuggled into the servant’s entrance dressed as Marilyn Monroe in order to sign a treaty selling all of New York back to the indians with a stack of paper rubles.

And that would be tragic.

If the Lie-Steam Media only knew how few people are hearing them now-a-days……..

Sing it Valerie, sing it!

The New York Slime had an article that the Russians were caught on phone conversations saying they wanted to influence the Trump administration to be more pro Russia. Every country does that. Didn’t Obama bribe Iran in an effort to like us? Didn’t Obama tell the Russian President that he would have more room to be pro Russia after the election?
Playing up to sympathetic members of an administration happens every day. It’s not illegal, immoral or in any way unusual.

Nice photo of the First Lady approaching the Wall, directly refuting the silly claim by a silly reporter at the Daily Caller that women aren’t allowed at the Wall, and must instead pray at another location. As everyone can see in this picture, women and men have equal access to the Wall, but in separate sections just as at any synagogue (or mosque).

Even at the Daily Caller? That’s sad. Reporters in general, and especially at the legacy media, have an abysmal lack of knowledge on religions and all things religious.

Yes, the news media have had it in for the Netanyahus forever, especially for Sarah, whom they make out to be some sort of super-bitch, so I’m sure they have a lot to talk about with the Trumps.

They’ve even both suffered ridiculous attempts to turn their liking for ice cream into some sort of scandal.