Trump will back any solution to end the Israeli-Palestinian conflict. 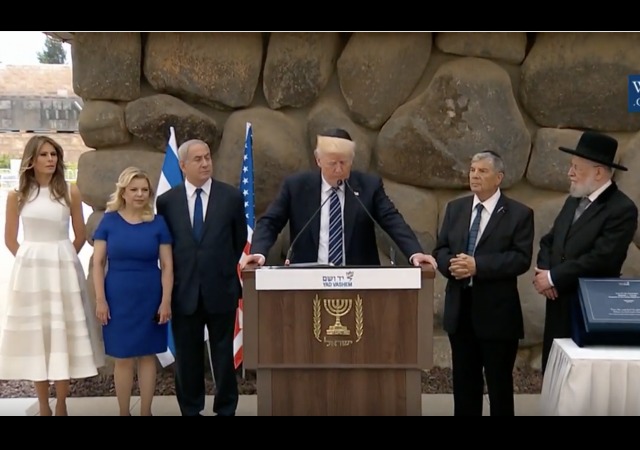 President Donald Trump finished his trip to Israel by meeting with Palestinian Authority President Mahmoud Abbas and a visit to the Yad Vashem Holocaust Memorial Museum in Jerusalem and the Israel Museum.

During his first day, Trump “pledged to work toward Israeli-Palestinain peace,” but admitted it’s the “toughest deal of all.” However, he assured Netanyahu “that the U.S. wants Israel to have peace.”

Trump met with Abbas in Bethlehem where the two men held a joint press conference. While former President Barack Obama insisted on a two state solution, Trump said he will take whatever solution will bring peace. From The Washington Examiner:

The president has also signaled a shift away from the Obama administration’s insistence that a two-state solution should serve as the only template for an Israeli-Palestinian peace agreement. Trump has said he would back whatever framework that’s agreeable to both parties, whether it’s a one-state solution or a two-state solution.

Trump also pointed out that an Israeli-Palestinian peace deal is important to bringing peace to the Middle East. From Haaretz:

Trump stressed two interesting messages to both Palestinian and Israeli leaders during his remarks alongside Abbas. In his message to the Palestinian president, Trump stressed that a precondition for peace is zero tolerance for violence, incitement and terrorism. The not-so-subtle message to Abbas was: curb anti-Israeli incitement, condemn attacks by Palestinians against Israeli civilians and stop paying allowances to the families of Palestinian terrorists. In his message to the Israeli prime minister, Trump articulated his view that an Israeli-Palestinian peace deal is key to solving the Middle East’s problems. In a clear contradiction to Netanyahu’s worldview, Trump established a direct linkage between ending the Israeli-Palestinian conflict (i.e. getting the “ultimate deal”) and eradicating ISIS to having peace in the entire region. (Barak Ravid)

Of course Abbas said he wants peace as well, but slammed so-called Israeli occupation as the reason for the conflict. From JPost:

In his speech in Bethlehem, Abbas reiterates the Palestinian Authority’s support for a peaceful solution to the Israeli-Palestinian conflict, but slams the Israeli settlements and Israel’s refusal to recognize a state of Palestine.
Abbas says the problem is not a religious one, but a problem with the “occupation.”
Abbas also raises the issue of the Palestinian prisoners, calling on the Israeli government to treat them “humanely.”

Trump and First Lady Melania Trump placed a wreath at the museum’s Hall of Remembrance. Trump then signed the memorial’s guestbook.

Trump said “words cannot describe the bottomless depths of evil of the Holocaust,” adding that it’s humanity’s solemn duty to mourn and grieve every life lost during the Holocaust.

Trump quoted Elie Wiesel saying “for the dead and living, we must bear witness,” stressing the need to forever remember the crimes of the Holocaust to prevent “such agony from ever repeating.”

Trump called the State of Israel a monument to the pledge of “never again,” stressing that barbarity can only be defeated if humanity refuses to be silent in the face of evil.

Sister of Holocaust victim moved to tears after replica of album she donated given to Trump and he+ Netanyahus embrace her #TrumpInIsrael pic.twitter.com/ojyvi7xwFS

On his final stop, Trump went to the Israel Museum where he delivered his final speech in the country. From JPost:

“I am honored to be In the ancient city of Jerusalem to address the Israeli people and all people in the Middle East who yearn for security, prosperity and peace,” he said. Jerusalem is a sacred city. Its beauty, splendor and heritage are like no other place on earth. What a heritage, what heritage. The ties of the Jewish people to this holy land are ancient and eternal. They date back thousands of years, including the reign of Kind David, whose star now flies proudly on Israelis’ white an blue flag.”

“Israel is testament to the unbreakable spirit of the Jewish people,” he continued. “From all parts of this great country, one message resounds, and that is the message of hope. Down through the ages, the Jewish people have suffered persecution, oppression, and… [others have] sought their destruction. …I make this promise to you: My administration will always stand with Israel.” This remark earned an additional handshake from Netanyahu.

After reiterating that civilized nations must band together against terror, he said, “Israelis are murdered by terrorists wielding knives… Hamas and Hezbollah launch rockets into Israeli communities where school children… must run to the bomb shelters with fear but with speed. ISIS targets Jewish neighborhoods, synagogues… and Iran’s leaders routinely call for Israel’s destruction. Not with Donald J. Trump.” At this, the rose to a standing ovation, as Netanyahu pumped his fist in support. “I like you, too,” Trump said in response.

In regards to the Israeli-Palestinian conflict, Trump was optimistic. “I had a meeting this morning with President Abbas and can tell you that the Palestinians are ready to reach for peace. I know you’ve heard it before, I am telling you, that’s what I do, that they are ready to reach for peace. And by meeting with my very good friend, Benjamin, [I can say that] that he is reaching for peace, he loves peace, he loves people, he especially loves the Israeli people. Benjamin Netanyahu wants peace. Making peace will not be easy. But with determination, compromise, and the belief that peace is possible, Israelis and Palestinians can make a deal.”

He went on to reiterate America’s stance against Iran’s nuclear proliferation. “The US is firmly committed to keep Iran from developing a nuclear weapon and halting their support of terrorist and militias. So, we are telling you right now, that Iran will not have nuclear weapons.”

After reflecting proudly on America’s support of Israel’s military infrastructure, Trump again praised Jerusalem for its diverse religious population side by side, and ended his visit warmly: God bless the state of Israel, and God bless the United States.”

I am pleased, but of course not at all surprised by this speech. Israel’s desire for peace and its human kindness to its neighbors has been on exhibit for decades. The issues between us and them are much simpler than with others. I am curious to see what he says at the Vatican.

It has been a long 8 years, so refreshing to see this now.

as long as DJT does NOT put additional pressure on Jews, Israel
will be able to continue to thrive.

The U.S. administration needs to push the Fakeistinians to stop
paying killers and their families and tell Abbas that if he continues to deny the participation of the Haj (and his evil spawn) in the Holocaust we will no longer have ANYTHING to do with him or his so called authority.

In the book, Abbas argues that the Nazi-perpetrated Holocaust had been exaggerated and that Zionists created “the myth” of six million murdered Jews, which he called a “fantastic lie”
————–
Amin al-Husseini
https://en.wikipedia.org/wiki/Amin_al-Husseini

Arab/muslims in Israel account for about 25% of the Israeli population and all have full rights of citizenship. They vote in Israeli elections and hold about 25% of the seats in the Knesset commensurately with their population percentage. They can own property and businesses. They can erect mosques and establish muslim schools.

Despite all this the left calls Israel an apartheid state. Its very right to exist is called into question. This thought pervasive on university campuses.