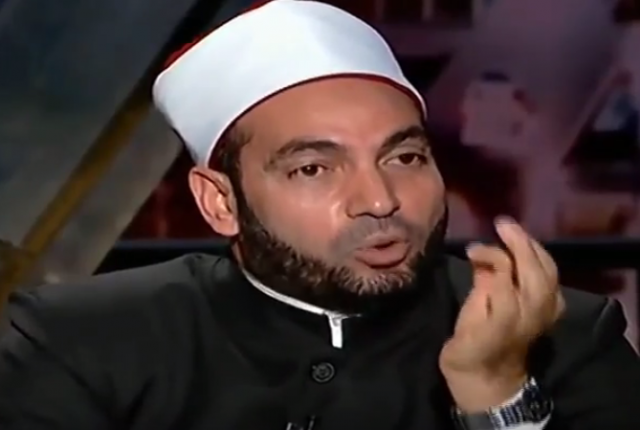 The last time Legal Insurrection visited the Land of the Nile, Pope Francis was refusing to use an armored car during his visit to Egypt.

Fortunately, one was not needed, and the Holy Father must have made quite an impression, especially after meeting with Abdel Fattah el-Sisi, Egypt’s President and proponent of an Islamic Reformation.

To start with, a noted Egyptian Islamic “scholar” has been canned from his television show and faces a trial after calling Christians “infidels”.

Salem Abdel-Galeel, television show host and a former deputy minister at the Ministry of Religious Endowments, is set to face trial for contempt of religion after describing Christians as non-believers.

Abdel-Galeel, who has since been booted from Mehwar television channel where he hosted a religious television show, is accused of being in contempt of religion, threatening public peace, and inciting violence against Christians.

On his show earlier this week, Abdel-Galeel claimed Christians had corrupted beliefs and were non-believers. The statements were roundly condemned by both Mehwar and religious officials. Some have even accused Abdel-Galeel of being a Muslim Brotherhood member and sympathizer. The Muslim Brotherhood was banned and labelled a terrorist organization by the Egyptian government following the ouster of former President Mohammed Morsi in 2013.

The Ministry of Religious Endowments, where Abdel-Geleel once worked, said that Abdel-Geleel would be banned from giving religious sermons at mosques in Egypt.

To give you a sense of Abdel-Galeel’s questionable philosophy, here is a clip of a debate between him and a far more rational Egyptian, author Dr. Sayyed Al_Qemani, a Muslim who supports separation of religion and state, who has faced accusations of heresy himself.

Furthermore, a leading Egyptian official is now on his way to Italy to discuss an intriguing new vacation concept.

Egypt’s Tourism Minister Yehia Rashed headed to Rome in order to discuss with Vatican’s Tourism officials the possibility of promoting the Holy Family route in Egypt as part of religious tourism.

According to a statement released by the Ministry, this visit comes as a part of Egypt’s efforts to add the journey of the Holy Family on Egypt’s religious tourism map.

This step is forecasted to attract a large number of tourists from all around the world.

I, for one, would be very interested in taking this particular tour! It would be a real blessing to see Egypt’s tourism and government recover from its experiment with the Muslim Brotherhood.

I would also like to visit Egypt and to see this route as well. Sadly, Egypt needs to make major changes to how they treat Coptic Christians and visitors before I will consider going there. Ditto for Turkey which is drowning in Erdogan shenanigans…

There’s a reason why Egypt which was over 90% Christian when the Arabs (note, I don’t say Muslims, as Islam hadn’t been invented yet) in the 7th century is now only 10% Christian.

And that reason is religiously (Islamically) mandated persecution.

I am prepared for any libtard who retreats into the great libtard redoubts. “Not all Muslims” and “But the Bible.” Bring it girls. Islam is unique. Uniquely nasty and violent and vile. And I can prove it.

Any libtard who thinks of attempting some sort of moral relativism between Islam and Christianity needs to familiarize themselves with the Arabic term al Azl.

Muhammad had a position on it, and I will most definitely be bringing it up.

Sorry, Jews, if I appear to be leaving you out of the discussion. The fact is major PR campaign is to make Muhammad (who is most likely a fictional character) more Christ-like and Jesus (who is unlike Muhammad a well documented historical figure even if you don’t believe in His resurrection) more like the warlord/prophet of Islam. See Reza Aslan’s BS book about Jesus, “Zealot,” if you doubt me.

But take heart, Jews. Eventually these genocidal fools get tired about lying about me the Christian and turn to lying abou the Jews and I stick up for you then.

Here is the equivalent in the Bible:

“and it came to pass, when he went in to his brother’s wife, that he emitted on the ground, lest he should give an heir to his brother. And the thing which he did displeased the Lord; therefore He killed him also.” — Genesis 38

The very Biblical verse you quoted, that it displeased the Lord, shows it it is not equivalent. Muhammad said it didn’t matter if you, the rapist, pulled out or not. And note he didn’t say, “Don’t rape captive women.”

“8 Then Judah said to Onan, “Sleep with your brother’s wife and fulfill your duty to her as a brother-in-law to raise up offspring for your brother.” 9 But Onan knew that the child would not be his; so whenever he slept with his brother’s wife, he spilled his semen on the ground to keep from providing offspring for his brother. 10 What he did was wicked in the Lord’s sight; so the Lord put him to death also.”

“Sahih Muslim – The Book of Marriage(22) Chapter: The ruling on coitus interrupts (‘Azl)

Abu Sirma said to Abu Sa’id al Khadri (Allah he pleased with him):

0 Abu Sa’id, did you hear Allah’s Messenger mentioning al-‘azl? He said: Yes, and added: We went out with Allah’s Messenger on the expedition to the Bi’l-Mustaliq and took captive some excellent Arab women; and we desired them, for we were suffering from the absence of our wives, (but at the same time) we also desired ransom for them. So we decided to have sexual intercourse with them but by observing ‘azl (Withdrawing the male sexual organ before emission of semen to avoid-conception). But we said: We are doing an act whereas Allah’s Messenger is amongst us; why not ask him? So we asked Allah’s Messenger, and he said: It does not matter if you do not do it, for every soul that is to be born up to the Day of Resurrection will be born.

I don’t know who this Zachriel character is but he’s the biggest fool I’ve ever come across in my life.

Do you really think you can get away with comparing apples to pineapples and I won’t call you on it?

There is no equivalent verse in the Bible or any canonical text that compares with Muhammad’s advice to his followers when it comes to properly raping women. That’s only in Islam.

Arminius: The very Biblical verse you quoted, that it displeased the Lord, shows it it is not equivalent.

You said people should “familiarize themselves with the Arabic term “al Azl”. It means coitus interruptus.

What do you think the intention was with regard to the captured girls?

Sorry, I’ve gone off my nut. What do I mean, eventually?

The first chapter of the Quran, the Fatihah prayer, is a cursing prayer. Who are the Muslims cursing? Jews and Christians.

“…Guide us to the straight path – The path of those upon whom You have bestowed favor, not of those who have evoked [Your] anger or of those who are astray.”

Those who have evoked Allah’s anger are the Jews, those who have gone astray are the Christians. Five times a day Muslims lead off their prayers by cursing non-Muslims. Most especially Ahl al khuttab, the people of the book.

This explains the Rotherham child sex scandal more than you’ll hear from anyone else. How is it, some Muslim falafel seller or taxi driver will ask himself, is he serving those who have earned Allah’s anger or gone astray? It’s not right. But when he’s climbing on top of 12 year old blond girl and forcing himself on her, he’s making the world rights

It’s why Yazidi girls report their rapists prayed before and after. The rapes were, according to the rapists, acts of worship.

Oddly enough I don’t hate Muslims. I don’t hate anyone, really, as hate is expensive and I can’t afford it neither can you. But I despise the ideology that imprisons everyone it dominates, Muslim and non-Muslim alike.

I hate muslims. I believe islam is a dangerous cult and a primitive political system. Get them out of my country and keep them out. BTW, what is the matter with a ban on muslims? These are the ones that are causing the terrorist activities.

It’s wrong to hate. And counterproductive. Millions of Muslims are born into the religion and have absolutely no use for it. This is why Sharia is totally incompatible with the Constitution. Every single madhab of fiqh (school of Islamic jurisprudence) agrees. Leaving Islam carries a death sentence.

`Abd Allah (b. Mas`ud) reported the Messenger of Allah (peace be upon him) as saying:
The blood of a Muslim man who testifies that there is no god but Allah and that I am the Messenger of Allah should not be lawfully shed but only for one of three reasons: married fornicator, soul for soul, and ONE WHO DESERTS HIS RELIGION separating himself from the community.

They’re trapped. Pray for them.

No way he gets convicted, a Muslim jury won’t vote to convict a Muslim for denigrating Christians.