Confirmation vote should take place on Friday around 7PM EST. 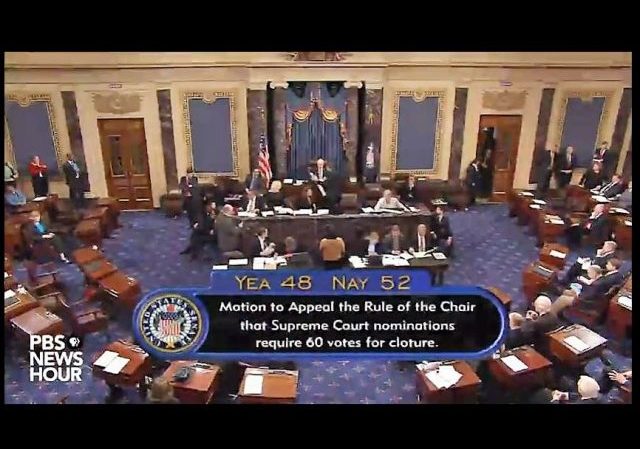 The Senate Republicans used the “nuclear option” to end the filibuster on Judge Neil Gorsuch’s nomination to the Supreme Court. The Senate now has 30 hours to debate before the confirmation vote, which should take place on Friday at 7PM EST.

The Senate voted 55-45 to end the debate with three Democrats voting yes: Donnelly (IN), Heitkamp (ND), and Manchin (WV).

With this change, a Supreme Court nominee can receive confirmation with a simple majority instead of 60 votes.

PLEASE REMEMBER: As much as the left spins it, the nuclear option is NOT a rule change. All it does is provide a change in Senate PRECEDENT. 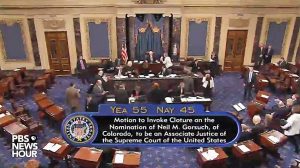 12:27PM: Vote on nuclear option went down the party line 52-48. Sets new precedent. Now voting to end the debate. Just needs simple majority. If this happens the Senate can debate for 30 hours.

12:18PM: Nuclear option vote going on now. This would change the precedent and lower the bar to break filibusters for SCOTUS nominations:

GOP wants nays to prevail on this #NuclearOption vote. Voting to overrule the chair establishes a new precedent for filibusters/SCOTUS noms

12:00PM: McConnell takes the next steps for the nuclear option by raising point of order there should be simple majority to break the filibuster. Chair rules against him. Schumer asks for motion to adjourn until 5PM

11:50AM: Senate voting on Schumer’s request to move the revote to April 24 at 3PM

What to watch for on nuclear option: McConnell makes pt of order that simple majority is required to break filibuster on SCOTUS noms

Nuclear option: Chair will rule against McConnell. McConnell will then appeal ruling of chair. Senate will vote on chair's ruling

#NuclearOption Key vote is when Senate votes on ruling of the chair. GOP wants nays to prevail. If so, they establish new precedent

Language to watch for: "Shall the decision of the chair stand as the judgment of the Senate?" #NuclearOption

11:35AM: Taking a vote to reconsider the cloture vote.

11:20AM: 41 no votes, which means the Democrats succeeded. The GOP will move to the nuclear option.

11AM: Senate now voting to end debate on Gorsuch.

Important to remember: These do not change the rules of the Senate:

They will be establishing a rules precedent under which the Senate will now operate. It’s a technical but important distinction. Changing the Senate rules requires a super majority while changing precedents only requires a simple majority.

“Changing the Senate rules requires a super majority while changing precedents only requires a simple majority.”

For purposes of USSC judges, isn’t this just a difference without a distinction?

Penalty vs tax comes to mind

The Dems don’t seem to realize that their slanders against Gorsuch, who has tried to be extremely fair, are bound to hurt the guy. And they can’t keep him from becoming a member of SCOTUS. That’s what they did with Clarence Thomas. So once again, they have needlessly aroused animosity against themselves in one of the most powerful lawmakers (yes, that’s what SCOTUS has become) in the nation. Works for me, if that’s what they want.