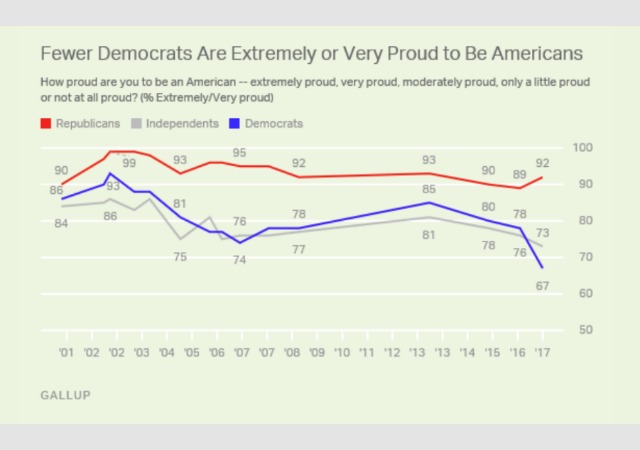 Polling conducted by Gallup earlier this year found that the number of Democrats “extremely” or “very proud” to be American is down by eleven percentage points compared to similar polling last year.

There’s been little change in patriotic sentiment for those self-identifying as either Republican or Independent. Gallup first conducted the poll in 2001. 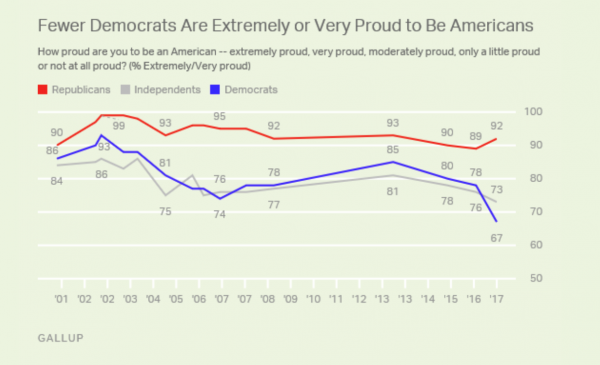 Sixty-seven percent of Democrats say they are “extremely” or “very” proud to be Americans, down 11 percentage points from a year ago. Republicans (92%) and independents (73%) are about as likely now as in 2016 to express such patriotic sentiments.

These results are based on a March 9-29 Gallup poll, which updated the Gallup trend question first asked in January 2001. The percentage of Democrats saying they are proud is the lowest Gallup has measured to date, falling below the previous low of 74% recorded in January 2007. That survey was conducted when Republican President George W. Bush had a 36% job approval rating and just after he announced a “surge” in U.S. troops to Iraq to attempt to turn around U.S. fortunes in the increasingly unpopular war.

The decline in Democratic pride this year most likely stems from Democrats’ negative feelings about President Donald Trump; fewer than 10% of Democrats approve of the job Trump is doing.

Gallup also found that national pride is at its lowest since 2001.

Should we be worried? Probably not. Gallup suggests Democratic disdain for President Trump is mostly to blame, but that they’ll pull out of it soon enough. Dissent is not as patriotic as it’s been made out to be, it would seem.

Those Who Are No Longer Our Countrymen.

Interesting to note the decline during the second term of BHO.

Head south before we build the fence.

I think we should deploy human cannons along the border for rapid deportation. Chip them the first time and send them back with small charge, each time they return double the charge. If they make it to a third cannon deportation aim them at a building. Their hitting the side of a building and creating a smear down the side should make it clear to others to stay the hell out of America.

They should move somewhere that they will be proud to be from. They certainly aren’t improving this country. As I remember, Michelle Obama originally said she wasn’t proud to be an American.