“The last time a Republican president nominated someone to the Supreme Court, Democrats tried to filibuster him too.”

Democrats have promised to filibuster the Gorsuch confirmation vote. Cloture, if passed, would limit the filibuster.

“Later today, due to the threat of an unprecedented partisan filibuster, I’ll file cloture on the nomination of Judge Neil Gorsuch to be an Associate Justice of the U.S. Supreme Court. It should be upsetting to everyone that our colleagues across the aisle have brought the Senate to this new low, and on such an impressive nominee with such broad bipartisan support.

“Judge Gorsuch is independent, he’s fair, he’s got one of the most impressive resumes we’ve ever seen, and he’s earned the highest possible rating from the group the Democratic Leader calls the ‘gold standard’ for evaluating judicial nominations.

“No one seriously disputes his sterling credentials to serve on the Court. And yet, in the Judiciary Committee, Democrats just withheld support for him. On the floor, Democrats say they’ll launch a partisan filibuster against him — something Republicans have never done. No one in the Senate Republican Conference has ever voted to filibuster a Supreme Court nominee. Not one Republican has ever done that.

“Later today, colleagues will continue to debate the nomination of Judge Gorsuch. They’ll discuss how completely unprecedented it would be for Democrats to actually follow through on this filibuster threat — to actually block an up-or-down vote for this nominee even though a bipartisan majority of the Senate supports his nomination — and what the negative consequences would be for the Senate if they succeed.

“I’ll be listening with interest. I hope Senators in both parties will listen as well. ‘There has never been,’ as the New York Times and others reported last week, ‘a successful partisan filibuster of a Supreme Court nominee.’ Never in the history of our country. Not once in the nearly 230-year history of the Senate.

“The last time a Republican president nominated someone to the Supreme Court, Democrats tried to filibuster him too. That was Samuel Alito in 2006. Cooler heads ultimately prevailed. Even former President Obama, who as a Senator participated in that effort, now admits that he regrets joining that filibuster effort.

“Democrats are now being pushed by Far-Left interest groups into doing something truly detrimental to this body and to our country. They seem to be hurtling toward the abyss this time, and trying to take the Senate with them. They need to reconsider. Perhaps they’ll recall their own words from the last time they flirted with a partisan Supreme Court filibuster.

“Back then, the current top Democrat on the Judiciary Committee said she opposed attempts to filibuster Supreme Court nominees. ‘[Just because the nominee] is a man I might disagree with,’ she said, ‘That doesn’t mean he shouldn’t be on the court.’ She said the filibuster should be reserved for something truly outrageous.

“When President Clinton nominated Stephen Breyer, I voted to confirm him. When President Clinton nominated Ruth Bader Ginsburg, I voted to confirm her. I thought it was the right thing to do. After all, he won the election. He was the president. The president gets to appoint Supreme Court justices. When President Obama nominated Sonia Sotomayor and Elena Kagan, I led my party in working to ensure they received an up-or-down vote — not a filibuster. We were in exactly the same position that our Democratic friends are today—no filibuster. We thought it was the right thing to do.

“It’s not because we harbored illusions that we’d usually agree with these nominees of Democrat presidents. Listen to this, Madame President, we even protested when then-Majority Leader Reid tried to file cloture on the Kagan nomination. We talked him out of it. We said it wasn’t necessary. And Jeff Sessions, the current Attorney General was the ranking member of the Judiciary Committee at the time. Jeff Sessions talking Harry Reid out of filing cloture because it wasn’t necessary. We did not want even the pretense of a possibility of a filibuster to be on the table.

“Well, it’s quite a different story from what we’re seeing today. But this is where our Democratic colleagues have taken us. Will a partisan minority of the Senate really prevent the Senate’s pro-Gorsuch, bipartisan majority from confirming him? Will they really subject this eminently qualified nominee to the first successful partisan filibuster in American history?

His full remarks can be viewed here:

Should Democrats refuse to relent, McConnell indicated he would consider the nuclear option — a rule change requiring only a simple majority — to ensure Gorsuch is confirmed.

Motion to proceed to debate passed: 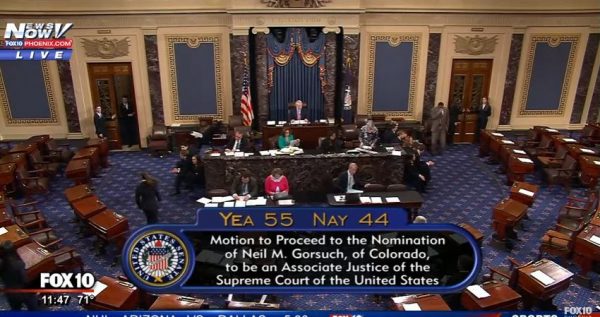 Time for the republicans to slash and burn the democrat’s.
Take no prisoners.

Once Gorsuch is confirmed they need to get filling all the other openings on the federal bench.

Thank you President Trump for a great nomination.

I value a filibuster the same way I value “intelligence services” and surveillance: used properly, they are wonderful assets.

The key phrase there is “used properly“. The Dems are (and have been for quite some time) fully committed to one thing and one thing only: stonewalling and blocking anything a GOP President or majority tries to do. There is no attempt at crossing the aisle, no attempt at compromise, no attempt to work together.

No diplomacy among the parties. Donald Trump and Mitch McConnell may as well be Satan and the Anti-Christ (respectively) for all the Dems are willing to strike a deal.

Off the top of my head, the only other group who is consistently this obstinate, is the Palestinians/Hamas when it comes to negotiating with Israel.

That, I believe, is the real, long-term casualty: the loss of dignity and statesmanship. And the Dems are doing it to themselves.

The turtleman said, “Well, it’s quite a different story from what we’re seeing today. But this is where our Democratic colleagues have taken us…”

1. Stop calling the democrats “colleagues” since they clearly are not so. They’re adversaries PERIOD!

2. The GOP’s role of voting to confirm Sontameyor and Kagen confirmed the Republican leader’s RINO status as neither of Obama’s nominees were constitutionalists.

So the question remains, will we see an Associate Justice Gorsuch Friday evening?

For all his faults, it is because of McConnell’s backbone last year that we are having this conversation today.

Let’s keep his feet to the fire of breaking the filibuster for sure, but the fact we don’t have Justice Merrick Garland is because of McConnell.