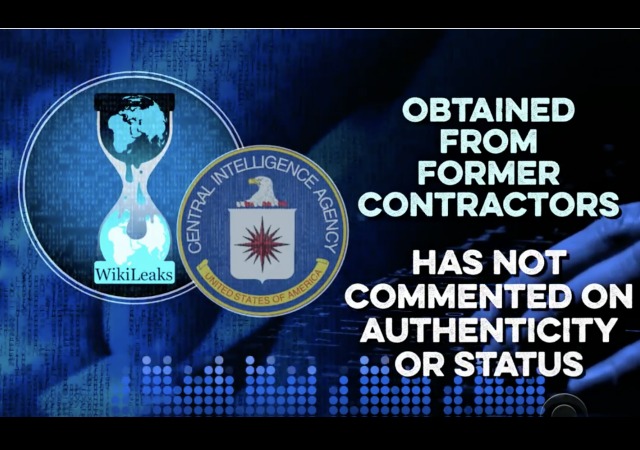 CBS News has reported that the FBI and CIA have started an investigation to find the person who provided WikiLeaks with secret documents.

The investigation is linked to the WikiLeaks publication of almost 9,000 pages that detailed the CIA’S hacking operations. According to the documents, the CIA uses its own malware to hack into anyone’s electronics and spy on them. The agency even has malware from Russia, and other countries, which means agents can make an attack look like it came from that country.

“The archive appears to have been circulating among former U.S. government hackers and contractors in an unauthorized manner, one of whom has provided WikiLeaks with portions of the archive.”

But according to CIA Director Mike Pompeo:

By the time WikiLeaks got hold of this intelligence, it was already broadly available. It was easily obtained by the hacker who gave it to Assange because it was being carelessly passed around in e-mails. So who is to blame the “non-state hostile intelligence service” or the CIA for being incompetent? It’s not stealing if you leave you wallet in the men’s room. Or in the case of the CIA, your wallet, Franklin planner, car keys, ATM card (PIN # written on it) and house keys.

I just wish the FBI would put a little more emphasis on finding criminals and less on hounding whistle-blowers.

But then……. who would do the work of the FBI and CIA….
oh and NSA also!

From a CIA intelligence gathering standpoint, this is a big deal. Now, the reasons for the disclosure that the information released by Wikileaks is accurate and that there is an active investigation into the identity of the person(s) responsible for leaking this information is what is really important.

Generally, on a mole hunt, which this is now appears to be, the investigation is kept totally quiet. Sometimes even after the mole is identified and dealt with. It is possible that the investigative agency will reach a point where they will believe that they are not going to be able to reliably identify or take action against a person suspected of being a mole. In this case, public disclosure may cause the mole to visibly react and give himself away.

The release of the information that the mole hunt is under weigh could also serve two other purposes. It sets up the potential to blame the Wikileaks leak on someone other than the CIA. Say, an agent of a foreign government. It also, it is already happening, make a case that Wikileaks is affiliated with, and probably financed by, the evil Russian Empire.

What is being totally ignore, not overlooked but ignored, is that these documents specifically state that the CIA plans to use, if it has not already done so, the same hacking software and techniques used by Russian intelligence services, as well as most of the hacking world, in an effort to deflect suspicion that the CIA was responsible for the hacking. This point is HUUUGGEE. It was alleged evidence of this type of software that was a major factor in the belief that Russian sources were responsible for the hacking attack on the DNC server. The take away is, that if the Wikileaks documents are factual, then it could have been almost anyone, including the CIA, who hacked the servers. And, if the documents were acquired from a CIA insider, then one has to wonder at the reason for their release. It could have been to protect another state sponsored intelligence operation. It could have been done to harm the CIA. Or, it could have been to counter a false flag operation run by the CIA or one of its contractors.

The fallout from this past election just keeps getting better and better, Even Hollywood can’t turn out stories like this stuff.

Your golden nugget Mac, “the information released by Wikileaks is accurate…”