CNN Interview: “We are under threat” 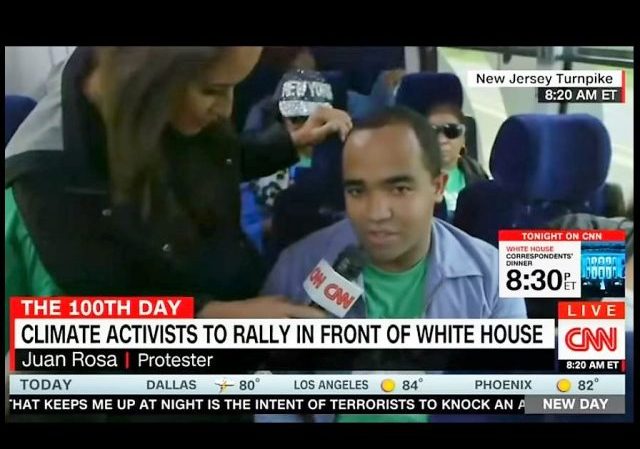 There’s a “People’s Climate March” on DC happening today, and CNN put a reporter on a bus traveling to the March from Harlem. A protester explained that he was going to Washington because people in inner-city areas “don’t have resources to escape if we have flooding or other issues caused by climate change.”

Shades of Al Gore’s An Inconvenient Truth, and its apocalyptic vision of a drowning NYC.

But not to worry. Worst comes to worst, Al Gore will be out there, plucking people off their rooftops. Al will either be in a boat, or perhaps swooping low in a jet he can afford to charter with part of the proceeds of his $500 million sale of Current TV to the fossil fuel sheikhs of Qatar.

KAYLEE HARTUNG: Juan Rosa, he’s wide awake. Juan, why is it important for you to be a part of today’s march?

PROTESTER: We’re going to Washington today because we are front-line communities, Washington Heights, Harlem, the Bronx. We are communities where people don’t have resources to escape if we have flooding or other issues caused by climate change. And we have an administration that is hostile to the science behind global warming, climate change and hostile to the regulations that were put in place to protect us from those effects. And we’re going today to send a message that we are under threat and that we need action from our policymakers and our elected officials.

Mark, would it be OK if I just wish they get flooded 🙂