Just a tad problematic for the Day Without Women crowd 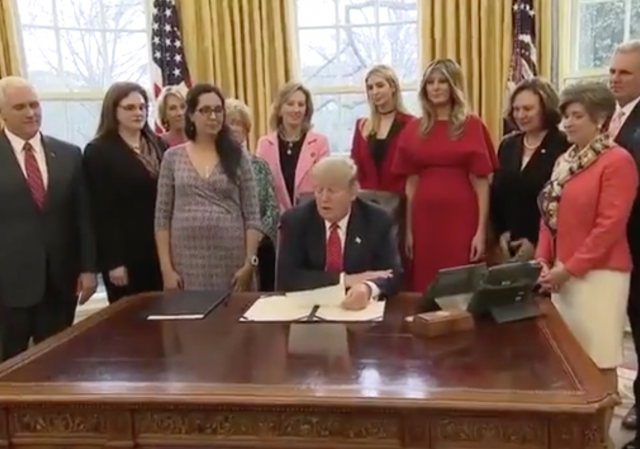 As women of privilege abdicate their responsibilities in order to protest President Trump, women hoping to get a leg into the science, technology, engineering and math fields (STEM) have new hope.

A week ago, Trump signed a pair of bills meant to encourage the recruitment of women in male-heavy STEM fields. Only one in four women who hold a STEM degree work in a comparable field. Trump called this “unfair.”

President Trump said at an Oval Office ceremony that it’s unfair that only one in four women with a degree in one of these areas works in the field.

One measure authorizes the NASA administrator to encourage young women to study STEM fields and pursue careers that will help advance science and space exploration. It also requires NASA to report to Congress on its plans for achieving the goals spelled out in the legislation.

The second measure authorizes the National Science Foundation to encourage its entrepreneurial programs to recruit and support women to extend their focus beyond the laboratory and into the commercial world.

Trump as the anti-woman president is just another mantra of the ill-informed. He might be uncouth, but so far, nothing about his actions as president indicate sexism.

Trump callously signs bill aimed at getting women into STEM. Next thing you know he'll be sending them to concentration camps. h/t @JoshYaz pic.twitter.com/lh3oVnqX0A

I’m a lady with a STEM degree, and I have not regretted it for a minute.

I was also never discouraged by anybody except for 1) people, male and female, by own age, and 2) Liberal Arts a$$hole professors, who resented having the STEM majors “invade” their classes and top their courses.

I don’t know where the kids got it from, but they told me all kinds of nonsense about what I could and couldn’t do, being female, and all. That persisted all the way through law school. I learned to shrug my shoulders and say “watch my smoke.”

As for the idiot professors, I think it is a sin to discourage STEM students from taking arts courses. I had the music department insist that my teacher could not give me any better than a “B” for my voice class. For my Shakespeare class, I had a professor give me a “C” for and “A” take-home paper, so I went down to the Dean’s office, dropped the class, and left the paper with them to let them know the reason why I withdrew.

The chemistry, engineering, math, biology and physics professors were always positive and welcoming.

My undergrad degree was in neuroscience. But, I went into accounting (it was easy for me) after I got my MBA in the late 70s. My first job was with a Big 8 firm and I was the second women in the office. One senior told me that he preferred the females on his team since we were smarter than “the average bear” (male auditors).

During my first year, I was at an utility company and overheard the senior try to explain nuclear fuel to a second year. After I made a comment, I was then assigned to test audit the nuclear fuel inventory since I apparently was the only one who understood the calculations. That was very sad!

I was always told (by my teachers) that I could only be a secretary. I ended up with a double major in Finance and Economics. I put that to good use as the youngest (and only female) stockbroker in the firm. After leaving the market, I stayed home to raise and homeschool three children. Favorite classes? Honors Advanced Physics and Early Transcedental Calculus.