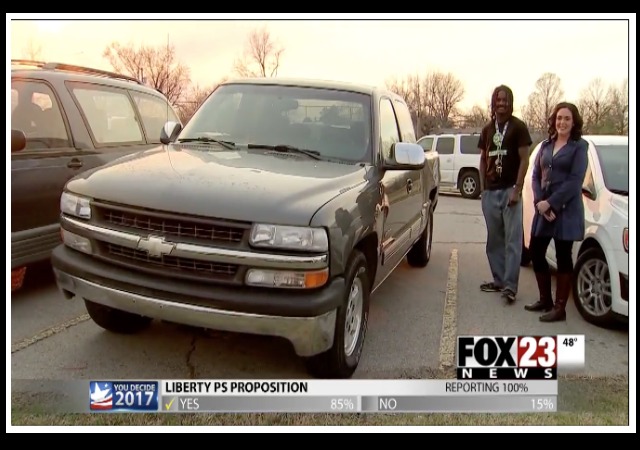 An anonymous family has gifted a truck to Anthony Brown, 22, who works as a custodian at Carnegie Elementary in Tulsa, OK. Someone crashed into his car, totaling it, and escaped on foot, leaving Brown in an insurance mess:

Because he lives 20 miles away from the school, Brown missed two days of work after the crash.

He told the principal he’d either have to start taking the bus that got him to work four hours early and walk home or find another job.

That’s when the principal posted to Facebook asking for help.

Within minutes, an anonymous family said they’d give him their truck. The principal says that is despite the fact that the family is going through a hard time of their own.

By the end of the day, other people had also volunteered and come up with ways to buy him a car if the truck didn’t worked out.

The principal says the students and parents love Brown, and he didn’t want the custodian to work anywhere else

Brown says he feels very loved. He said he was surprised, because he didn’t know how important he was to everyone

How great. An American safety net.

Good people doing good things for a good man. And, it’s a good truck; I had one of those. He’ll get a lot of service out of it.