Are Senate Democrats Wanting to Cut a Deal Over the Gorsuch Nomination?

Are Senate Democrats Wanting to Cut a Deal Over the Gorsuch Nomination? 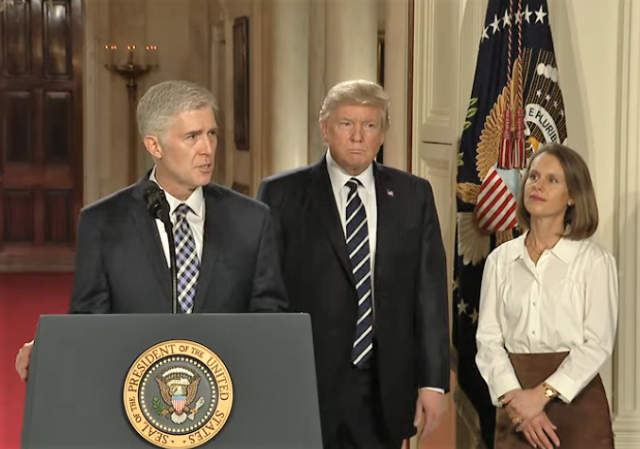 According to Politico, Senate Democrats are hoping to strike a deal with Senate Republicans to ensure Trump’s Supreme Court Justice nominee, Judge Neil Gorsuch, is confirmed.

In exchange for confirmation, Politico reports, Democrats “are most likely” to request a deal that would exchange Gorsuch’s confirmation for the preservation of the filibuster for any subsequent Supreme Court bench openings.

Gorsuch is likely to be confirmed with or without a deal, so there’s seemingly zero reason for Senate Republicans to even entertain such a deal if it was being discussed.

A group of Senate Democrats is beginning to explore trying to extract concessions from Republicans in return for allowing Supreme Court nominee Neil Gorsuch to be confirmed, according to multiple sources familiar with the matter.

The lawmakers worry that Gorsuch could be confirmed whether Democrats try to block him or not — and Democrats will be left with nothing to show for it. That would be a bitter pill after the GOP blocked Merrick Garland for nearly a year.

The deal Democrats would be most likely to pursue, the sources said, would be to allow confirmation of Gorsuch in exchange for a commitment from Republicans not to kill the filibuster for a subsequent vacancy during President Donald Trump’s term. The next high court opening could alter the balance of the court, and some Democrats privately argue that fight will be far more consequential than the current one.

If Democrats move ahead with the plan — it’s still in the early discussion phase — it would require buy-in from some Republicans, but not necessarily Majority Leader Mitch McConnell (R-Ky.) or his top deputies. At least three rank-and-file GOP members would have to pledge not vote to unilaterally change the Senate rules through a majority-only vote later in Trump’s term — the so-called “nuclear option.”

The current talks are limited to about a half-dozen Democratic lawmakers. They haven’t made an offer to Republicans yet, and Democratic leaders wouldn’t support one.

Democrats familiar with the effort requested anonymity to discuss a sensitive matter that divides the caucus. Some liberals are aiming to block Gorsuch, while others are worried about the electoral prospects for 10 senators up for reelection next year in states won by Trump if they’re seen as obstructing the president’s court pick.

Vulnerable Democrats are concerned about the looming 2018 midterms. With most likely voters believing their opposition to Judge Gorsuch is political, and not issue-based, they’re clearly looking for an out.

Chief Counsel and Policy Director of the Judicial Crisis Network, Carrie Severino, responded to news of the potential deal saying, “Now that Neil Gorsuch is well on his way to confirmation, Democrats hope Republicans will fumble at the one yard line. The silly proposal being floated by Democrats would merely prolong their ability to filibuster exceptionally qualified nominees, while giving Republicans nothing in return. Republicans would be fools to take it, and I don’t think they are fools.”

Leonard Leo, President Trump Advisor’s for the Supreme Court was equally as unimpressed:

“Democrats must be delusional to think that Leader McConnell or any of his Republican colleagues would reward Democrats for their awful treatment of Neil Gorsuch by agreeing to a 60-vote threshold for future Supreme Court nominations in exchange for a filibuster-free vote on Judge Gorsuch. One way or the other his confirmation is all but assured by now. This absurd ‘deal’ would prolong an environment in which Democrat Supreme Court nominees get up or down simple majority votes and Republican nominees get filibustered. That’s not a deal, it’s unilateral disarmament.”

Unfortunately (or fortunately) for Senate Dems, there’s little, if any incentive for Republicans to even consider such a deal. I never advocate for the “but they did ______” approach, but Senate Democrats never once hesitated to leverage parliamentary procedure to block Republican interests, neither should Republicans.

So we will give you this one as long as you give up the hard one power you have to stop us blocking all future nominees. Only a fool or a RINO would take such a bad deal.

This reminds me of the constant gun control “compromises” in MA — we give up something, they give up nothing but a promise that this is all they want. Guess what? A year later they are back for more.

Never underestimate the ability of the “Stupid Party” to snatch defeat from the jaws of victory.

Pigs in a blanket, fry em like bacon…the Dems of course.

1
notamemberofanyorganizedpolicital in reply to healthguyfsu. | March 23, 2017 at 5:12 pm