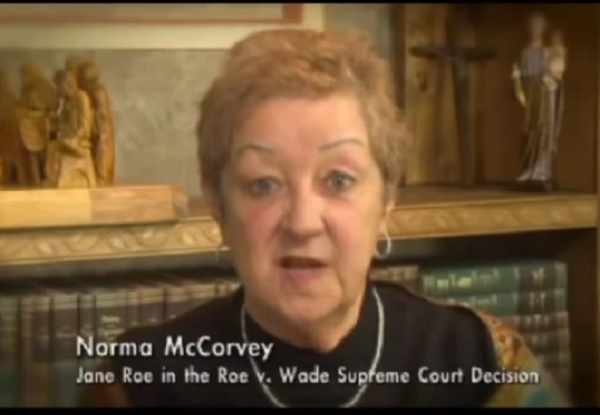 Norma McCorvey, Jane Roe in Roe v. Wade, died today at the age of 69.  She was the “winner” in that decision, but later regretted deeply her role in legalizing abortion in the United States.  Although she never had an abortion, she says she was consumed by guilt over the Supreme Court decision.

Norma McCorvey, who was 22, unwed, mired in addiction and poverty, and desperate for a way out of an unwanted pregnancy when she became Jane Roe, the pseudonymous plaintiff of the 1973 U.S. Supreme Court decision in Roe v. Wade that established a constitutional right to an abortion, died Feb. 18 at an assisted-living facility in Katy, Tex. She was 69.

Her death was confirmed by Joshua Prager, a journalist working on a book about Roe v. Wade. The cause was a heart ailment.

. . . .  Ms. McCorvey fully shed her courtroom pseudonym in the 1980s, lending her name first to supporters of abortion rights and then, in a stunning reversal, to the cause’s fiercest critics as a born-again Christian. But even after two memoirs, she remained an enigma, as difficult to know as when she shielded her identity behind the name Jane Roe.

She admitted that she peddled misinformation about herself, lying about even the most crucial juncture in her life: For years, she claimed that the Roe pregnancy was the result of a rape. In 1987, she recanted, saying that she had become pregnant “through what I thought was love.” Although the details of her account were legally unimportant, abortion foes pointed to the lie to discredit Ms. McCorvey and her case.

According to the most sympathetic tellings of her story, she was a victim of abuse, financial hardship, drug and alcohol addiction, and personal frailty. For much of her life, she subsisted at the margins of society, making ends meet, according to various accounts, as a bartender, a maid, a roller-skating carhop and a house painter. She found a measure of stability with a lesbian partner, Connie Gonzalez, but even that relationship reportedly ended in bitterness after 35 years.

Harsher judgments presented Ms. McCorvey as a user who trolled for attention and cash. Abortion rights activists questioned her motives when Ms. McCorvey decamped in 1995, after years as a poster child for their cause, and was baptized in a swimming pool by the evangelical minister at the helm of the antiabortion group Operation Rescue.

Father Frank Pavone of Priests for Life, the man McCorvey credited with bringing her to the Catholic church, issued the following statement.

“Norma has been a friend of mine, and of Priests for Life, for more than 20 years,” Father Pavone said. “She was victimized and exploited by abortion ideologues when she was a young woman but she came to be genuinely sorry that a decision named for her has led to the deaths of more than 58 million children. Norma’s conversion to Christianity, then to Catholicism, was sincere and I was honored to be part of that journey. I’m sorry she won’t be here to celebrate with me when we finally abolish legal abortion in this country, but I know she will be watching.”

Norma called Father Pavone “the catalyst that brought me into the Catholic Church.” He confirmed Norma in 1998. They maintained their friendship throughout the years, with Norma traveling to Staten Island in 2013 to celebrate the 25th anniversary of Father Pavone’s ordination.

Mrs. Morana said: “Norma McCorvey was a woman who allowed herself to be manipulated when she was at a low point, but she rose above that. She never had an abortion but she sought, and found, healing at Rachel’s Vineyard for the part she played in the tragic and unjust Roe v. Wade decision, and she worked hard on behalf of the unborn as long as she was able. I am proud to have called Norma my friend, and I will miss her.”

He also posted the following message and prayer for her on Facebook:

She was also the subject of an ABC News story (the video quality is poor, but it’s still worth watching):

We all make mistakes as youngsters that we can live to regret later. Fortunately for us all, God does forgive the repentant sinner. RIP Norma. Hopefully you will find peace at last.

McCorvey was used and exploited in order to normalize abortion rites for political and social progress. Abortion rites are a final solution. There are other choices.

There is no Constitutional right to commit elective abortion, premeditated murder, or capital punishment of the wholly innocent. There is only a veil of privacy to obscure actions and consequences.

Does anyone know where her child is?