When confirmation bias outweighs the desire for accuracy 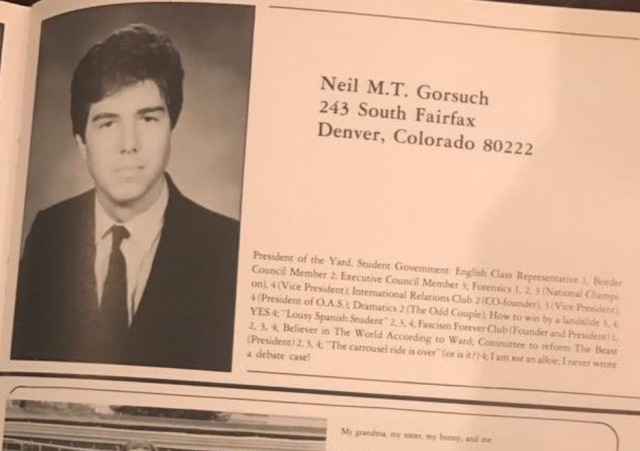 No one can take a joke these days, especially not media outlets driven by confirmation bias.

Touted as an “exclusive”, The Daily Mail must’ve obtained a copy of a yearbook. Rather than focus on the numerous conservative tendencies of the young Gorsuch, also included in the yearbook, the Daily Mail ran with the clearly satirical “Fascism Forever Club.” 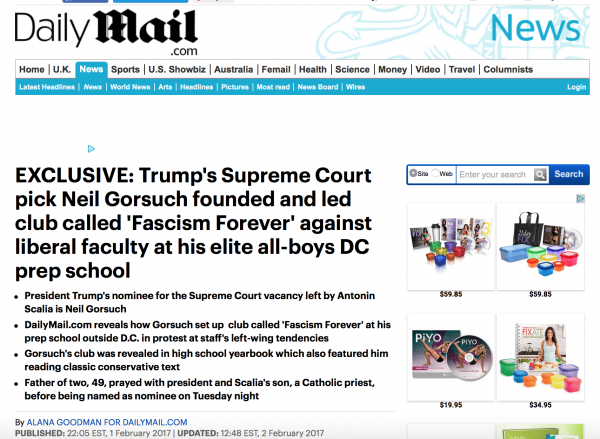 The Daily Mail post birthed numerous other posts, all linking back to the original. Few got the joke. Most didn’t.

When humor is consumed by confirmation bias, we’re subjected to these headlines: 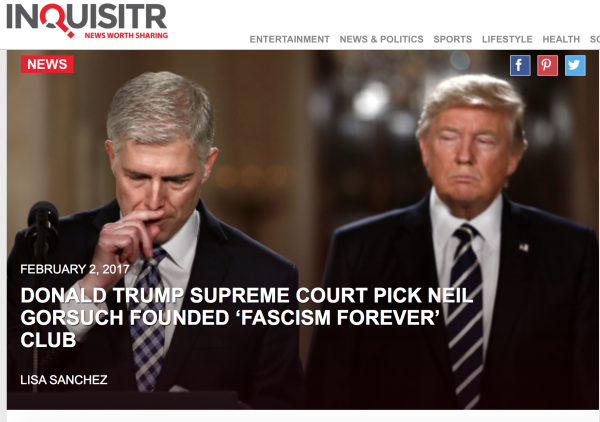 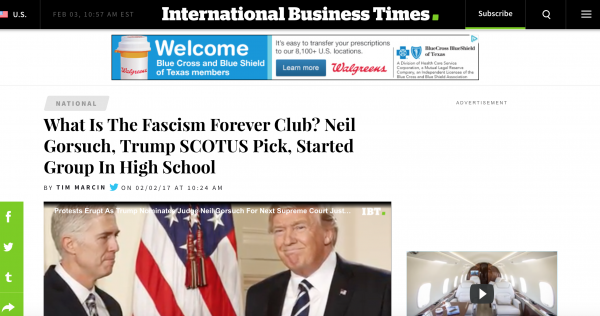 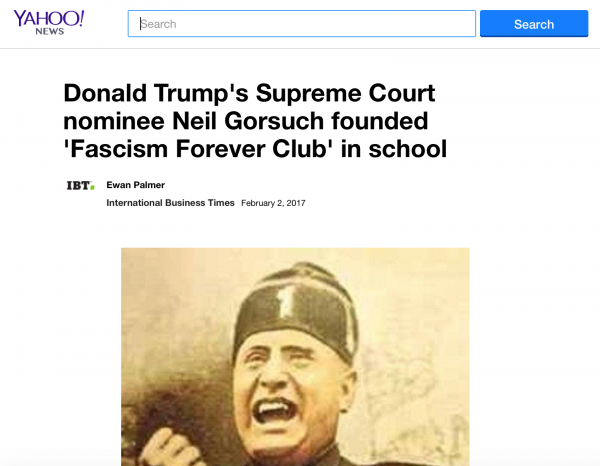 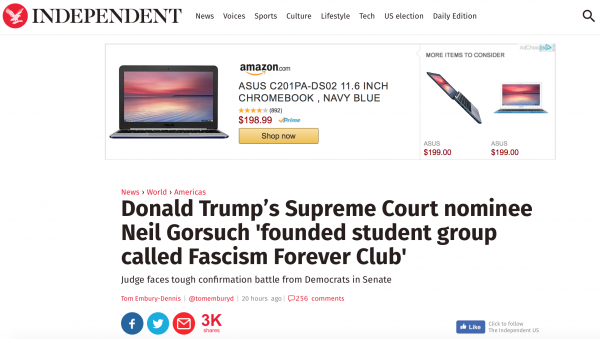 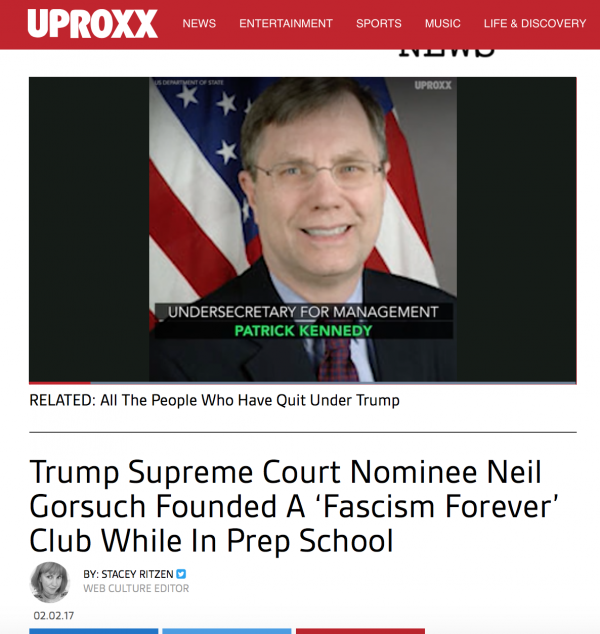 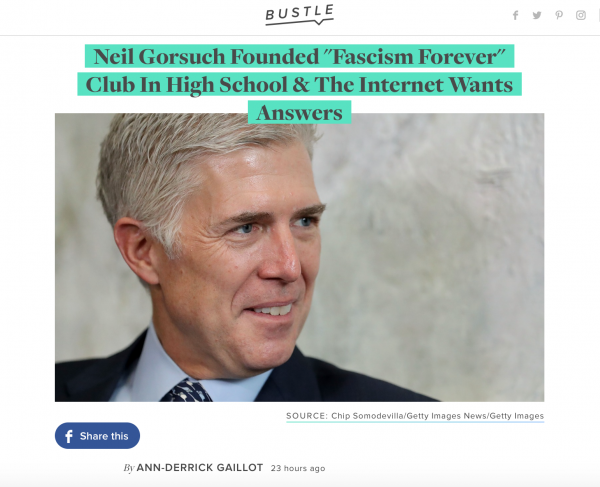 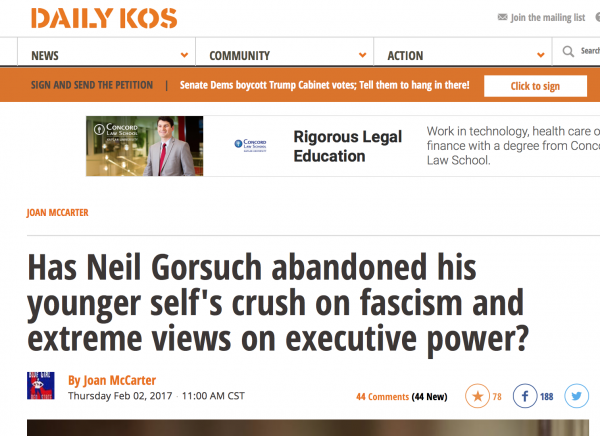 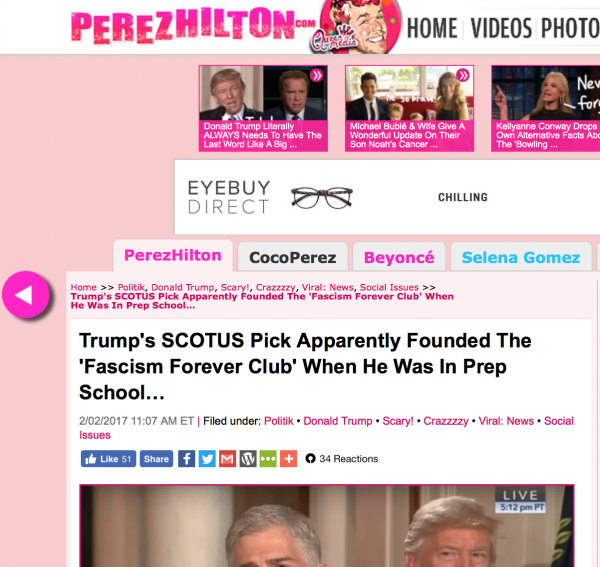 Forward went so far as to describe the evils of fascism, even name dropping the U.S. Holocaust Museum: 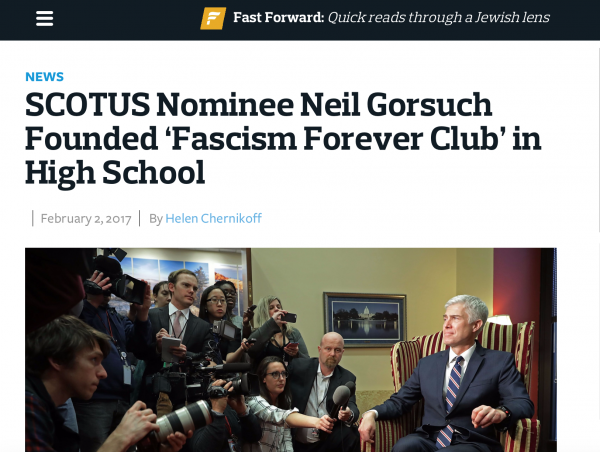 It was “a total joke” says a history teacher and advisor from Gorsuch’s junior and senior years:

He wrote that he founded and led the “Fascism Forever Club,” though those with knowledge of the school back in the 1980s say there was no such club. The mention of it in the yearbook was a tongue-in-cheek attempt to poke fun at liberal peers who teased him about his fierce conservatism.

It was “a total joke,” said Steve Ochs, a history teacher at Georgetown Prep who was the student government advisor during Mr. Gorsuch’s junior and senior years at the Bethesda, Md., school.

“There was no club at a Jesuit school about young fascists,” he told America. “The students would create fictitious clubs; they would have fictitious activities. They were all inside jokes on their senior pages.”

Type “Gorsuch” into a Google search bar and the search behemoth offers the following suggested searches: 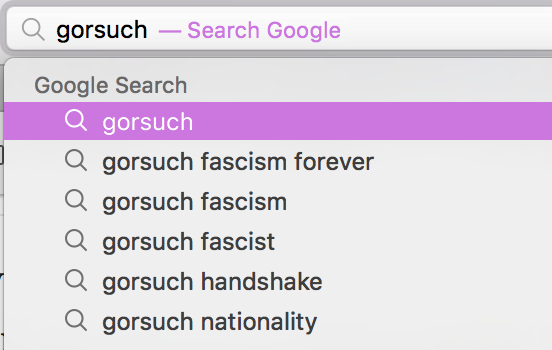 My high school yearbook says that my secret ambition was to build the Soviet Union’s first chewing gum factory. That has to disqualify me from something.

Well, obviously journalists interviewed the faculty sponsor of the club at Georgetown Prep and other members and asked for comment from Gorsuch before publishing. That’s journalism 101 and they always check their facts.

And its a public interest story after all, since we can’t have our president elevate a current federal appeals court judge with a history of championing fascism to the Supreme Court when other qualified candidates are available to defend the constitution.

OK, yeah, that’s more than enough sarcasm for one day.

Well Ted Cruz wanted to star in a teen tit movie in high school. Although I’m pretty sure most guys at that age want to as well.

My favorite head line is the “… and the internet wants answers” one. If your readers really wanted answers they would be easy for a legit news source to find. An hour of phone calls and they have the real “scoop”, to include in their article. The problem is that the internet doesn’t actually want answers, it’s just fake news and memes to get the message out, if it turns out wrong they don’t care, they’ll just label it alternative facts and walk away.