Steps include hiring more agents, ending catch and release, but will allow those under DACA to stay. 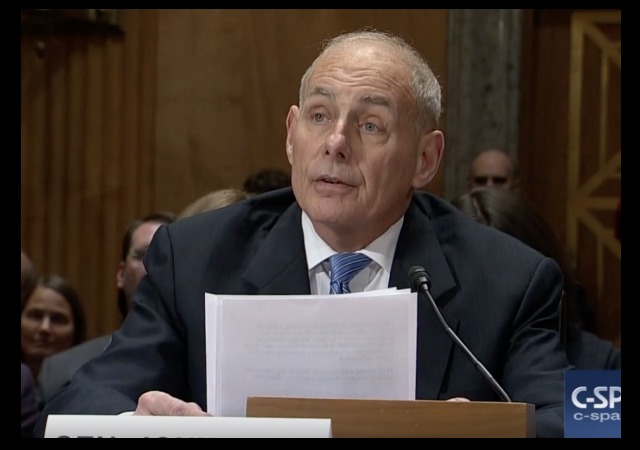 The Department of Homeland Secretary has issued memos that provide new guidelines for immigration. These include hiring more agents and ending “catch-and-release,” but kept Deferred Action for Childhood Arrivals (DACA) intact.

The new directives would supersede nearly all of those issued under previous administrations, Kelly said, including measures from President Barack Obama aimed at focusing deportations exclusively on hardened criminals and those with terrorist ties.

“The surge of immigration at the southern border has overwhelmed federal agencies and resources and has created a significant national security vulnerability to the United States,” Kelly stated in the guidelines.

Basically, Kelly has urged his department to follow the immigration laws America has on the books.

Kelly also pushed for a wall on the border with Mexico. He wants the government to “immediately begin planning, design, construction and maintenance of a wall, including the attendant lighting, technology (including sensors), as well as patrol and access roads.” He called the wall important and something the country needs “to deter illegal immigration” and a “critical component” to border security.

In his guidelines, Kelly has listed which aliens should be deported by importance. But the memos have spared those under DACA:

The changes would spare so-called “dreamers.” On a conference call with reporters, a DHS official stressed that the directives would not affect Obama-era protections for illegal immigrants who came to the U.S. as children and others given a reprieve in 2014. But outside those exemptions, Kelly wrote that DHS “no longer will exempt classes or categories of removable aliens from potential enforcement.”

This means that no illegal immigrant is exempt from removal from the United States except for the “dreamers.”

The DHS will also bring back any programs that allows “local law enforcement collaboration with the federal authorities.” Former President Obama’s administration eliminated these programs “because of concerns they violated due process or were a hindrance to local authorities.”

Kelly did not include the National Guard in the memos. Last week, a document leaked from the White House that the administration wanted to use 100,000 National Guard troops to round up illegals. Instead of double checking the story, the MSM ran with it and ended up with egg on their face.

Nothing really new here, except that the current administration will “honor” the existing DACA EOs.

Under existing federal law, the administration really has no authority to refuse to enforce any immigration law. So, when an illegal alien is encountered, by a federal law enforcement officer, that alien is supposed to be detained. If a final order deportation exists, the administration is supposed to implement the execution of that order. If such an order does not exist, then the alien is entitled to a deportation hearing or exclusion hearing, which ever applies.

DACA is a continuing problem. In the first place, the President has no authority to refuse to enforce the existing immigration laws, none of which allow for an exemption for those in DACA. Neither does US law give the President the power to grant such an exemption. A temporary injunction has been in effect since February of 2015 which bans expansion of the DACA qualifications. It does not address the original DACA policy. The injunction was allowed to stand by a 4-4 vote of the SCOTUS. Which means that no decision as to the legality of the program has been made. It is probable that the SCOTUS will have to revisit the legality of DACA once Gorsuch is confirmed.