Trump has always made it known he will protect the LGBTQ community. 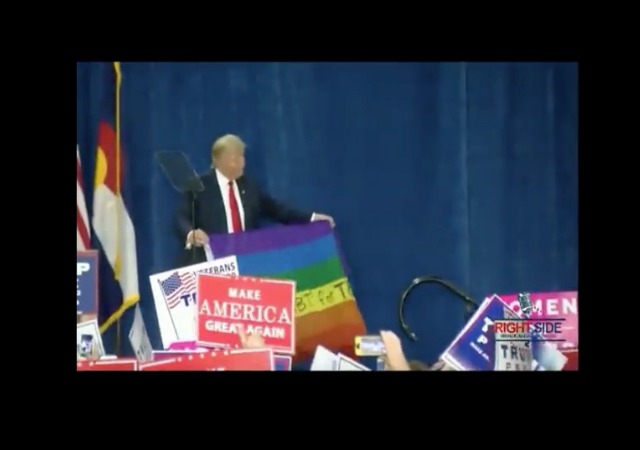 As the left loses its collective mind over immigration, President Donald Trump has decided to keep President Barack Obama’s executive order that protects the LGBTQ community in the workplace. From The New York Post:

“President Donald J. Trump is determined to protect the rights of all Americans, including the LGBTQ community. President Trump continues to be respectful and supportive of LGBTQ rights, just as he was throughout the election,” White House press secretary Sean Spicer said in a Tuesday morning statement.

“The president is proud to have been the first ever GOP nominee to mention the LGBTQ community in his nomination acceptance speech, pledging then to protect the community from violence and oppression,” the press secretary added.

“The executive order signed in 2014, which protects employees from anti-LGBTQ workplace discrimination while working for federal contractors, will remain intact at the direction of President Donald J. Trump,” Spicer concluded.

Of course people had circulated rumors that Trump wanted to overturn this policy. These same people obviously ignored Trump during the campaign because he always made it known that he holds the LGBTQ community in a high esteem.

Human Rights Campaign President Chad Griffin remains unconvinced. He stated that Trump “has left the key question unanswered — will he commit to opposing any executive actions that allow government employees, taxpayer-funded organizations or even companies to discriminate?”

Again, where was Griffin during the campaign? Trump is the first president to openly support gay marriage when he took the oath of office. Look at his statement after a radical Islamic terrorist slaughtered gays at an Orlando club:

“Our nation stands together in solidarity with the members of Orlando’s LGBT community,” Trump said. “They have been through something that nobody could ever experience. A radical Islamic terrorist targeted the nightclub, not only because he wanted to kill Americans, but because he wanted to execute gay and lesbian citizens because of their sexual orientation. It’s a strike at the heart and soul of who we are as nation. It’s an assault on the ability of free people to live their lives, love who they want and express their identity.”

My best friend Chris Barron worked tirelessly during the campaign to prove that Trump was better for the community than Hillary Clinton. After Trump won the election, Barron penned an op-ed for Fox News reminding the gay community that Trump will support them:

Orlando was not the beginning of Trump’s outreach to the LGBT community, indeed it is much more of a natural continuation of Trump’s long-time record of treating LGBT people with fairness and equality in the business sector.

Here is a video of Trump waving the LGBTQ flag:

Iran, Iraq, Syria, Somalia, Chicago…. way more important than who sticks what in what asshole.