“Women can be anything they want except pro-life” 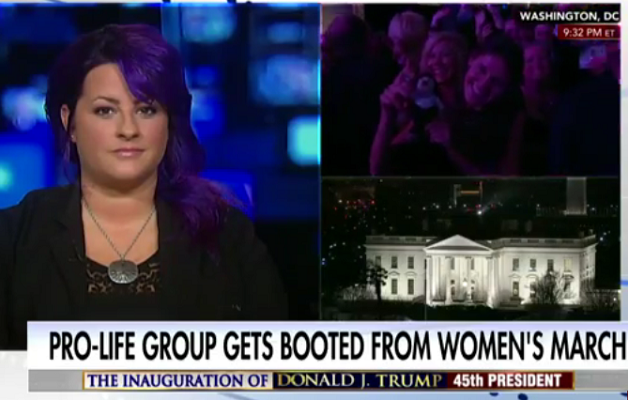 Tucker Carlson interviewed a woman who runs some feminist group that is pro-life because she and her group were dropped from today’s “Women’s March” due to their pro-life stance. Oddly, they were going there to protest Trump, in the spirit of the “Women’s March” protest, but disliking Trump and being a woman is not enough for the radical feminist groups descending on DC today.  They demand that all women must be pro-abortion.

A feminist group leader said her organization was barred from participating in the Women’s March on Washington next week because their group is pro-life.

Destiny Herndon-De La Rosa, who is opposed to President Trump like many of the march’s participants, said the organizers effectively rescinded her invitation after they found out her stance on that issue.

Herndon-De La Rosa told Tucker Carlson that “women can be anything they want except pro-life” in the eyes of those groups.

After a partnership was extended to her “New Wave Feminists” to march on Monday, she said she accepted it with pride.

But, a backlash followed, and the group was dropped from the list of participants.

De La Rosa said that move sent a message that such women’s groups do not want to partner with pro-life women, and that groups like New Wave Feminists are needed “even more now”.

She was very articulate in defending her pro-life stance on the show.

Not surprising in the least.

Liberal feminists will accept any human with the “correct” plumbing, as long as it’s paired with the “correct” mindset and terminology. “Women’s Rights” doesn’t really mean women’s rights (which are currently on par with anyone else’s); it means to turn men into eunuchs and force women into power, as long as they have the correct mindset (see below). And “Women’s Health” doesn’t actually mean women’s health; it means free abortions. Agreement on some issues isn’t enough; it’s all or nothing.

Like many liberal “Progressive” groups, the one thing they cannot tolerate is “wrongthink”.