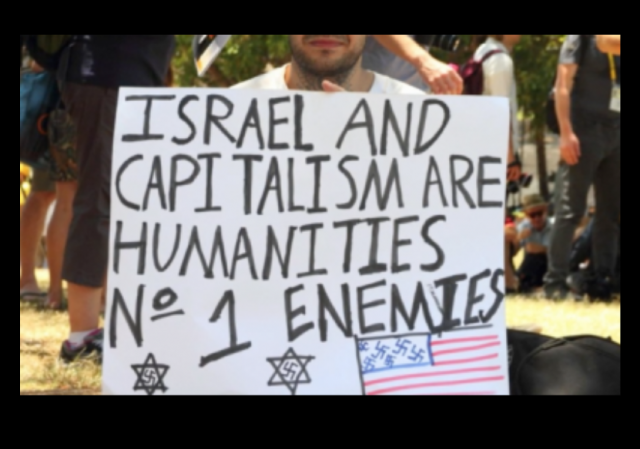 For several years we have been examining Gallup and Pew surveys of attitudes among Americans of the Israeli-Palestinian dispute. What we have seen is a trend of overall support for Israel reaching all-time or near-all-time highs.

At the same time, there is a slice of the population in which the support has been slipping — the left-wing of the Democratic Party.

That makes sense based on a number of trends we post about unrelated to polling: The intensive global push, particularly on campuses, to demonize Israel; “intersectionality” theory which makes Israel the central antagonist in the racial and identity politics of the progressive movement; the identification of Israel with capitalism which increasingly itself is demonized among the socialist-friendly section of the Democratic Party that supported Bernie Sanders.

Even as to more mainstream Democrats, Obama’s hostility towards Israel and the fights he has picked since the start of his administration, his refocus on outreach to the Muslim world, and the blame he and John Kerry clearly place on Israel, all have served to create a partisan divide. The Iran Nuclear deal broke that tension wide open, causing many Democrats to rally around Obama.

Pew just released another survey on views of the Israeli-Palestinian dispute, as part of a larger survey on American views of the world as Trump takes office. It’s unfortunately short on many analytical details, but it has enough to generate this Pew headline at WaPo: For the first time, Democrats are about as pro-Palestinian as pro-Israel:

And perhaps most notably, for the first time this century — if not ever — Democrats are now about equally split between
sympathizing more with Israel (33 percent) and with the Palestinians (31 percent).

The change across the political spectrum is clear when you look at the chart below. The biggest shifts over the last 15 years have
occurred among conservative Republicans, who have drifted toward a more pro­Israel view, and liberal Democrats, who have
drifted more toward the Palestinians. The most politically polarized are driving the change.

While conservative Republicans favored Israel by a 44­point margin in 2001, the margin is now 70 points. And while liberal
Democrats favored Israel by 30 points at the turn of the century, they now favor the Palestinians by 12 points.

The causes could be many. Israeli Prime Minster Benjamin Netanyahu and President Obama haven’t exactly been buddies, and
Pew’s data shows Democrats’ views of Netanyahu are pretty dim. Perhaps that has depressed support for Israel among
Democrats.

There could have been a different and equally accurate headline: Americans still overwhelmingly side with Israel (other than liberal Democrats).

If you look at the chart below, you’ll see that support for Israel versus the Palestinians stands at 51-19, versus 45-14 in 1978, and an even narrower gap in the mid-1990s.  Overall support for Israel has steadily increased for over a decade, whereas it has been flat for the Palestinians until the past two years, where it returned to mid-1990s levels. So overall, Americans support Israel over the Palestinians by more than 2.5-1. That is lower than Gallup showed in February 2016 (62-15) but consistent with Pews prior polling. I’ll be curious to see what Gallup shows in a month or so. 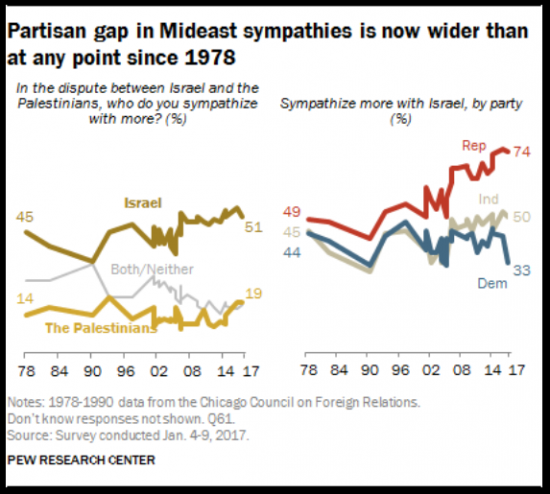 Here is Pew’s analysis of the partisan divide, which is wide:

As a result of these trends, there is now a 41-point gap between the shares of Republicans (74%) and Democrats (33%) who say they sympathize more with Israel. This is the largest party gap in views on this question in surveys dating to 1978. 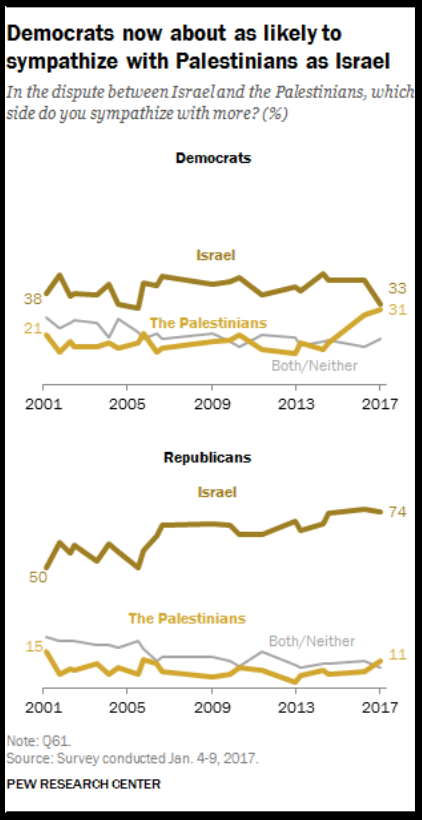 Clearly, liberal Democrats are the most hostile to Israel. 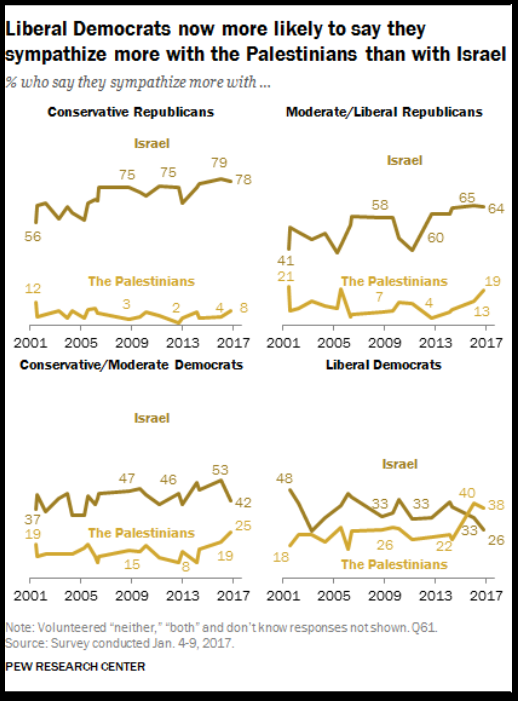 This demonstrates what I have long argued with regard to the BDS movement — the battles have been mostly won.  The war, however, is generational. When you listen to anti-Israel activists, their hope is that 10-20-30 years from now an anti-Israel center of power will develop in the American public among “progressives” and liberal Democrats. That could happen, but there is no evidence so far it is spreading to the American public as a whole.

As the Democratic Party has become more leftist, more radical, more away from the mainstream, Democrats have been eviscerated at the state level, and have lost Congress and the presidency. There may be an anti-Israel power center developing within the left-wing of the Democratic Party, but it is unlikely to have any power anytime soon.

Prior to the 1967 war, I think the Left saw Israel as an underdog, hence tacit support. With success in following conflicts and becoming the “strong horse” in the ME, the Left indulgence on underdogs and the oppressed was shifted away from Israel toward the Palestinians. As with US riots by minorities burning down parts of their cities, the terrorism by the Palestinians was excused as the only way they could be seen and their cause defended. Once one becomes the “strong horse” no degree of barbarity against them is unexcused. In the USA, if whites became oppressed…it was due punishment…likewise I when Israel is attacked or if in the future severely compromised , the Left will not support Israel. Once the “strong horse” always the bad guy getting what’s due. The Left is forever lost in support of Israel. The Left never has left its childhood phase… it still acts and speaks as a child and can never put away childish things.

That’s part of it; another is that in the first two decades of its existence, Israel tried to live with a heavily socialist model of government. (older readers will recall how much praise was heaped on the kibbutzim at the time) Sadly, socialism there worked out much like socialism everywhere, and the Israelis had the bad taste to abandon policies that didn’t work and gravitate towards capitalistic policies which DID work. The left has never really forgiven them for that.

Sharp uptick of support is a result of Gaza.

I don’t know if any of yall remember the mid/late 90’s, but it was endless bullshit and whining about ‘Gaza occupation’, ‘Gaza conflict’, always painting Israel as the evil oppressors.

Then they actually pulled back from Gaza. And the Palestinians did exactly what the Israelis said they were going to do – trash the place, set up rockets, and continue whining about Israel.

It was at that point that a lot of conservatives woke up to the fact that the Palestinians didn’t WANT peace. They wanted Israel destroyed.

Shocking image in that photo.

Denouncing Capitalism with a swastika? Idiotic. Fascism is, and always has been, a form of Socialism.