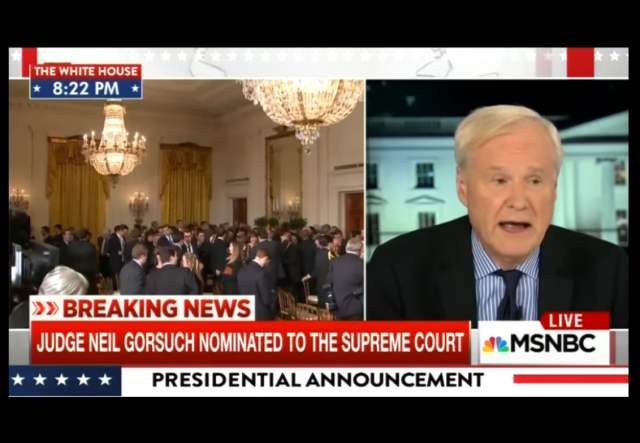 On MSNBC this evening, Chris Matthews cautioned Democratic Senators that if they vote to confirm Neil Gorsuch to the Supreme Court, they will have to answer for it for the rest of their political career.

His reasoning was a supremely political one: that at age 49, Gorsuch is likely to be on the Court for 30 years. And that any Dem voting to confirm him would have to answer, over all those years, for his decisions on controversial issues such as abortion and gun rights: “it will be on you,” warned Matthews.

Note: Earlier, Matthews predicted that the Gorsuch nomination will fail because Senate Majority Leader MitchMcConnell will not invoke the “nuclear option.” And since, according to Matthews, no Dems will vote to confirm, the nomination will fall short of the required 60 votes.

This Insurrectionist disagrees. No matter how much McConnell reveres Senate tradition, he will not let such a qualified jurist, and Trump’s first Court nominee, go down to ignominious defeat. If push comes to shove, I predict that McConnell will invoke the nuclear option, and Gorsuch will be confirmed on a simple-majority vote.

CHRIS MATTHEWS: The key thing here is, the guy’s 49. And Gorsuch again, he’s probably a good guy. Like Scalia was — I really liked the company of Scalia. He’s a very family-minded, good guy and his way of looking at life generally, if not the Court. But for 49, that means he will be on that Court for 30 years. That means the life of anybody in politics today, their political career. They will have to answer for this guy.

Can you imagine, a Democrat, I don’t care if you’re from Alaska, you’re from North Dakota. Wherever you’re from, you’re goint to have to answer for almost a true lifetime multigenerational career on the Court. Every ruling this guy Gorsuch makes, is a decisive vote in, in any way influences your belief about Citizens United, about abortion rights, about gay, equal marriage, equality of marriage.

Any one of the issues you care about: gun rights, every time he votes the wrong way it’s going to be on you. So I’m not encouraging these guys to think left and think future but they are damn well going to do it. They’re thinking about their own futures and you don’t want to have on your belt the notch that says “I voted for Gorsuch. I’m proud of it.”

So I think it’s 52 votes maximum. We’re going to have a real fight here, a real fight over that 60-vote threshold.

No Chris, the Dims are ALREADY answering for the horrible votes they made over the past eight years while they, like you, were under the spell of Obama. To wit: Obamacare and the historic shellacking Dims suffered since then. Your beatings will continue until your attitude improves.

What really gags me is when I think back to when justices like Ginsberg and Sotomayor were confirmed the Repubs didn’t make a fuss even though many didn’t vote for them. Gorsuch is such a solid choice that for any of the Dems to vote no is just plain evil politics and nothing to do with payback or mainstream. It appears that Trump is going to get this treatment at every turn so he needs to turn it to his advantage. Put this fine man out into the public and let the country see what a great choice he is and then we will see the fruits of the Dems hatred. They will plunge even deeper into the abyss that they have created with identity politics. The red states that have a Dem Senator coming up for re-election can have their Republican candidates run against this anti-American nonsense and politics of personal destruction. That will be very hard to defend by the Dems.

McConnell has no choice. No conservative will make the dems happy, so if Gorsuch doesn’t get 60 votes, what does Trump do appoint a liberal to get 60 votes? This is too important a nomination and he is extremely qualified for the job. If necessary the rules will be changed just like the dems did it when they were in power. Schumer’s argument that they didn’t change it for the Supreme Court is silly. There was no Supreme Court vacancy at the time.