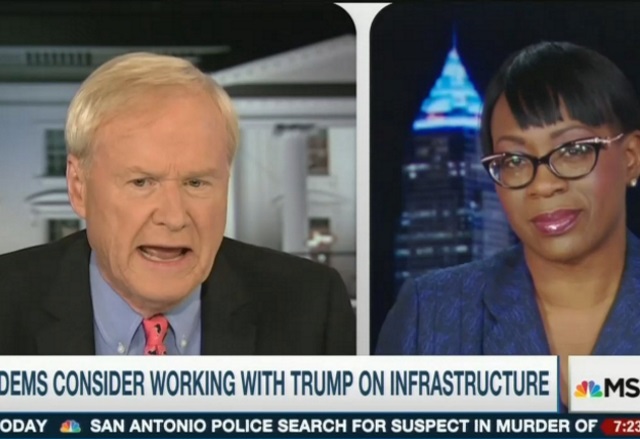 Imagine if just after the 2008 election, a conservative pundit had said this of President-elect Obama: “how do you dog-train Obama? I mean it tough. Dog train. If he poops in the hall, you make his nose go in it.” Western civilization as we know it might have ended right there.

But on this evening’s Hardball, that’s precisely what Chris Matthews said—except about Donald Trump, of course. His point seemed to be that Trump must be brought to heel should he have the audacity to follow through on his promises to build the wall and end Obamacare.

Is the liberal media absolutely losing its mind over the election of Trump?

CHRIS MATTHEWS: You’re up first again here. I want to ask you [former Dem Ohio state senator Nina Turner]. How do you dog-train Trump? I mean it tough. Dog train. You [unintelligble] a dog. If he poops in the hall, you make his nose go in it.

I mean, how do you make sure he doesn’t do it again? If he comes out there and says, we’re going to build a wall, we’re going to get rid of Obamacare. A big waste of time for everyone. It ain’t going to happen. The Democrats can at least stop that stuff from happening.

Chris has poop running down his leg instead of a tingle running up it! 🙂

Does PETA know how Matthews treats his dog?

You don’t really think Christy has a dog? sHe is more a pussycat kind of guy.

But didn’t Chrissy Tingles say 8 short years ago that it was his, and the rest of the media’s job, to make the new president successful?

There are rhetorical questions, of course, and coming from anyone else, what Matthews asked would be regarded as rhetorical, because, of course, there isn’t anything they can do. They’ve lost everything. The media has lost its veneer of credibility and have seriously beclowned themselves. The party has lost the WH, the House, the Senate, plus a gross majority of state governments. Any fool could read that on the wall. But Matthews is no ordinary fool. He appears to be asking sincerely, literally, how ‘they’ (media & Democrats, but I repeat myself)should end the stated Trump/GOP agenda). I’m a psychologist and I’m telling you that’s borderland delusional.