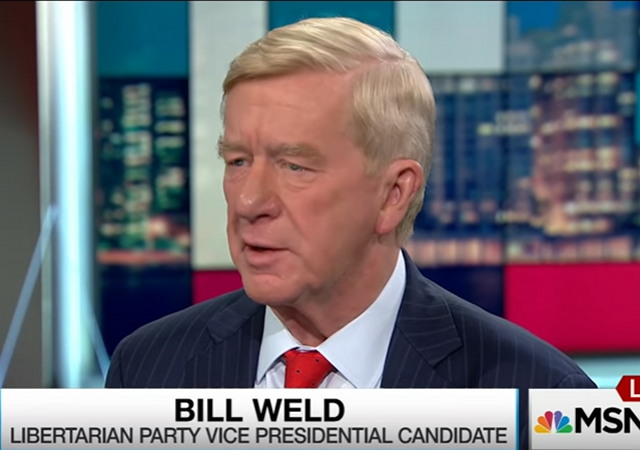 Libertarian VP candidate Bill Weld has apparently given up campaigning for himself and Gary Johnson, instead opting to sing the praises of Hillary Clinton on the Rachel Maddow show.

Fmr. Gov. and Libertarian party vice presidential candidate for president William Weld defended Hillary Clinton in an interview with Rachel Maddow. Weld, ignoring fundraising attempts by his running mate at the top of the ticket, Gary Johnson, said it is “high time” somebody defends the Democratic nominee for president and he is here to vouch for her.

MADDOW: And that seems hard like, let me just say as a Massachusetts resident who knows something of your tenure in public life there, I’m in a different place than you ideologically on the number line but I have a lot of respect both for your career and your thoughtfulness and I think that you are, you’re a deep thinker and a clear thinker on these things and I have a lot of respect for you, hope you don’t mind me saying…

WELD Let me button my coat, I sense something’s coming…

MADDOW: I can’t imagine that you wouldn’t tell a person in North Carolina or Ohio to vote for Hillary Clinton if the choice they were making was between giving the Libertarian Party 5% or potentially electing Donald Trump because you guys don’t have a chance against Donald Trump and she does and if they vote for you they would be helping to elect Donald Trump. The Libertarian Party hasn’t treated you great if they’re putting out statements that you disagree with over your name even now, one week before the election I can’t imagine that your loyalty to them is stronger than your fear of Trump as a President.

WELD: Well I’m here vouching for Mrs. Clinton and I think it’s high time somebody did and I’m doing it based on my personal experience with her and I think she deserves to have people vouch for her other than members of the Democratic National Committee so I’m here to do that.

Between this, Weld’s other quasi-endorsements of Clinton over the last few weeks, Johnson’s various brain farts in interviews this summer and fall (Aleppo-related and otherwise), and his weird eruptions of temper in encounters with reporters, the Libertarian ticket this year is pretty much a total debacle, huh?

Actual libertarians, which Weld is not, are naturally unhappy with this appearance but it’s the logical conclusion of Weld’s drift over the final month of the campaign. He sees the race tightening, he knows any chance of a splashy double-digit showing next week for the Libertarian Party is gone, and he’s getting nervous that he and Johnson are going to end up “Nader-ing” Clinton. If the plane’s going to crash anyway, he’d rather turn it into a kamikaze mission against Trump.

Have to say, one of the more amusing spectacles this election was watching Libertarians attempt to justify their support of Hillary Clinton.

“Yes, we Libertarians are going to elect an Authoritarian. On principle….”

The late Harry Brown, who was the Libertarian candidate in 1996 and 2000, was a true libertarian. He was steeped in political philosophy, articulate,and and true gentleman. The Libertarian party left libertarianism behind after Brown. It’s a shame, because this should have been the perfect storm to launch libertarianism into the mainstream, but alas, we get a Johnson/Weld ticket who don’t believe in libertarian principles and have finished off what principled thinkers like Harry Brown worked so hard to lay down a foundation for.

“because this should have been the perfect storm to launch libertarianism”

Yup, that’s my major gripe with them – this should have been their season. They finally get their shot, get called into the game for the 4th Quarter, and they fumbled away the first snap.

I can’t be a libertarian because I find their foreign policy to be hopelessly naive about what its like out there in the world. But I was hoping for a viable 3rd party to counter the GOP Establishment taking the base for granted.

And the Libertarian Party didn’t even work out in the off season.

btw, how counter-intuitive is it for Libertarian policy to be a retreat from the Jihad to shelter behind the walls of a police state? Because its either one or the other:

1) we take the fight overseas to Islam

2) or we hunker down and play defense, with Big Brother monitoring our every move for potential terror activity.

It’s hard to believe that at one time some here viewed them as an alternative to Trump for conservatives.