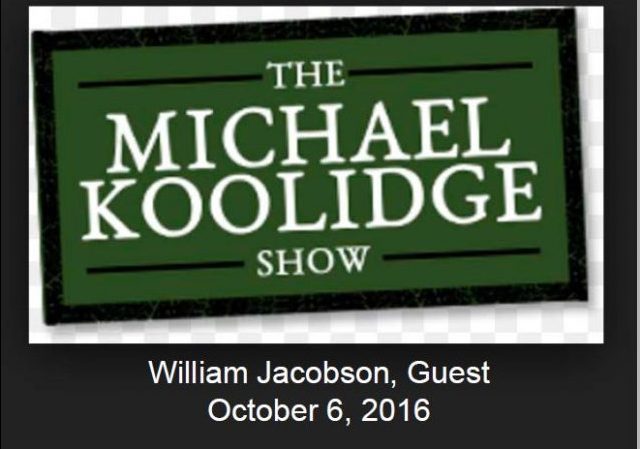 I was a guest on The Michael Koolidge Show on 1440 WROK in Rockford, Illinois and numerous other stations.

The discussion started with my take on the VP debate.

“I was left with the feeling wondering why Mike Pence wasn’t the presidential nominee because he was so much better on his feet than Donald Trump. And I wonder if Trump had given the performance that Pence gave, I think the polling would be very different nowadays. Trump was rising in the polls as we approached the presidential debate, it was not a good night for him by any account, and he has sunk pretty significantly, several percentage points, since then. And I just think that if he were as prepared as Pence was prepared, if he was on message as much, if he didn’t take the bait the way Pence never took the bait, I think we could be in a very different spot here.

That said, while I don’t know that a vice presidential debate changes a lot votes, I think it can change the atmosphere. And I do think it changed the atmosphere a little bit. I think it undid some of the damage done to Trump by the debate that he participated in. I think there probably are a lot more people out there thinking, well I’m not sure if I’m going to vote for him, but maybe I need to think about this again. So I think it was a net-net very big plus for the Republicans, even if it doesn’t change a lot of votes in itself.”

We then discussed whether Pence now is the frontrunner for 2020 if Trump doesn’t win.

Then we moved on to the John Doe investigation in Wisconsin, Nakoula Basseley Nakoula, and current state of the presidential race.

The posts we discussed were:

Here is the audio.

(I used to be able to convert audio to video and upload to YouTube, but Windows 10 eliminated Windows Movie Maker, so now I’m trying to figure out how to create and edit video — any suggestions of basic video editing software appreciated).

I love the GIF, and of course, he’s right.

Maybe not, with any luck, Trump will drop out and Pence will pick a running mate, and this thing may yet be salvaged. It’s a long shot, but it’s the only shot the GOP has.

It’s not only my hope. It is my prayer that America will be spared a presidency of either Hillary or Trump. I honestly believe that, after the contentious years of the current administration, Mike Pence is the sort of person and has the experience that this nation needs.

We praying solemnly and profoundly for America, come January, 2017, to begin a road to a better place. We think Mike Pence could be quite of service is helping this to happen.

What was I thinking! Brain lapse. Voting is already underway. So, I think it would be near-impossiblity for a ticket change.

I guess the best we can hope for is that on January 20, 2017 Donald Trump is sworn in as POTUS. On January, 2, 2017 he resigns and Mike Pence is given the oath of office.