Ken Bone told the truth about Trayvon Martin, and for that media must destroy him

Ken Bone told the truth about Trayvon Martin, and for that media must destroy him

“In times of universal deceit, telling the truth is a revolutionary act” 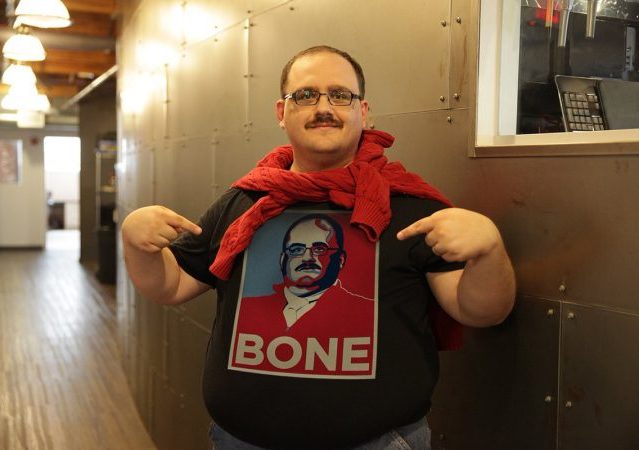 I mostly missed the Ken Bone phenomenon. I either wasn’t watching or wasn’t listening when he asked a question at the last presidential debate.

He then became a media darling, though I’m not really sure why. Something to do with his red sweater, apparently. And the fact that after the debate he said he started off leaning towards Trump, but was impressed with and considering Hillary.

It was a perfect pro-Clinton media meme, common guy journalists otherwise would mock becomes cool because he moves from Trump to Hillary; a good example for the common folk to hear about.

Bone then sought to cash in, selling a version of his red sweater and doing other stuff to make a buck and promote himself.

Then he got boned.

By the same media that loved him, but I suspect never really accepted the conversion from Trumpist to “I’m with her” enthusiast.

The pretext was an Ask Me Anything (AMA) forum at Reddit. During the AMA Bone used his prior username, rather than creating a new one, and in searches it turned up that some of this comments at Reddit in the past were about …. sex.

CNN was on the case almost as quickly as Donna Brazile forwarded that town hall question to the Clinton team, Ken Bone leaves seedy comment trail on Reddit:

Ken Bone’s charm may now be a thing of the past.

A look at the viral sensation’s Reddit history reveals a different side of the wholesome man America thought they’d earned. The discovery comes just a few days after Bone, clad in a red sweater, was sprung into the spotlight during Sunday’s presidential debate.

Bone’s questionable Reddit posts include a number of comments about the bodies of women in NSFW photos, as well as a confession that he once committed felony insurance fraud, forging documents to make it appear that he had car insurance for his pizza delivery gig.

But that wasn’t the cardinal sin. As that same CNN article noted:

In addition, he wrote candid comments about the killing of Trayvon Martin, which he referred to as “justified.” He also called acquitted gunman George Zimmerman a “big ole shit bird.”

The Daily Beast piled on:

Most damaging of all, he suggested the killing of Trayvon Martin was “legally justified”—however we should note that Bone did go on to add that George Zimmerman, who was acquitted in the killing of the unarmed teenager on the basis of Florida’s controversial Stand Your Ground law, was a “big ole shit bird.”

“Bad guy legally kills kid in self defence,” he wrote. “Sucks for everybody, including us due to media fuckery.”

Will this election cycle drain the good out of everything?

And it spread from there:

#kenBone is a nobody, but the MSM has to destroy him because he MIGHT vote for Trump.

I despise my MSM peers.

I said yesterday that the Internet was going to create and destroy Ken Bone within the week. Awful.

Ken Bone is learning how disposable the left views people once they've served their purpose.

Ken Bone was leaning Hillary after the debate but don't worry by the time the media is finished with him he'll be a Trump voter.

Presidential debate darling Ken Bone says comments he made about Trayvon Martin’s death being “justified” were taken out of context and people are way too eager to make him look bad.

Bone was doing an “Ask Me Anything” session on Reddit Thursday under his alias, StanGibson18, when people traced it back to an earlier thread with the Trayvon comment.

Bone tells TMZ the June Reddit post regarding Trayvon was merely him recapping the Department of Justice’s report on the case. “Legally justified” were the report’s words … not Ken’s.

KB says his personal feeling is … just because it was justified, doesn’t mean it was right, and he absolutely believes Trayvon’s death was a tragedy. As for why people made it seem otherwise? Ken says it’s a case of people just trying to take him down, now that he’s in the spotlight. 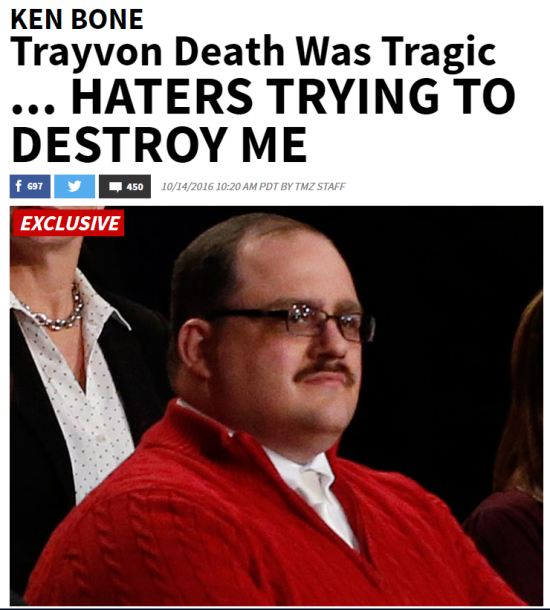 #KenBone explains what he meant by his Reddit comment concerning the shooting death of Trayvon Martin. pic.twitter.com/aJdljCqWAA

Of course, lost in all these attacks, is the fact that Bone was correct.

The shooting of Trayvon Martin was justified as a lawful act of self defense. I watched almost the entire trial live on TV, and of course, followed Andrew Branca’s daily live coverage and analysis, which was the best out there.

I laid out the case why the shooting was legally justified in this radio interview:

We had hundreds of posts about the case, but if you only have time to read one for a recap, read Andrew’s anniversary post, Zimmerman Trial Redux: Busting the Myths Again:

I suppose it’s to be expected that on the third anniversary of Trayvon Martin’s terrible, horrible, no good, very bad victim selection day we would get to enjoy a resurgence of the many false narratives surrounding Martin’s attack on George Zimmerman, Zimmerman’s self-defense, the circus of Sharpton-led protests, the politically-driven prosecution, and the resulting acquittal.

Back when this was all going on in real time I had the pleasure of writing several posts that gutted the worst of the memes.  It seems, then, that the most appropriate response to the re-emergence of these lies is to re-post their evidence-and law-based rebuttals.

Here I’ll just point to the myths I busted at length in my own posts–I’ll defer on the other related nonsense, such as the ubiquitous portrayal of the 17-year-old Martin using a picture of him at age 12 (a more age-appropriate “selfie” of Martin is featured above), and the lightening of photos of George Zimmerman to place greater emphasis on the “white” rather than the “Hispanic.”

I don’t have time to cover all of the carefully orchestrated falsehoods perpetrated by those who wished to put an innocent Zimmerman in prison for the rest of his life–there were easily dozens of these lies–but here’s an afternoon’s worth of enjoyable myth-busting reading.

“In times of universal deceit, telling the truth is a revolutionary act.”

Justified, yeah right, I wouldn’t be surprised if they feel the deaths of James Byrd Jr and Emmett Till were Justified also, after all he shouldn’t have been whistling at that white woman they would probably say.

Bone was their champion until he took the wrong stance.
Disagree with them and their narrative you will be destroyed!
Mr. Bone is learning that lesson.

He’s about half right on Zimmerman. I really don’t understand people who think that the shooting being justified doesn’t make it right. If all the elements are in place for a justified self-defense action, it’s the right thing to do. If even one element is missing or inadequate, as Mr. Branca teaches, then it wasn’t justified. I even have a lawyer friend who thinks the verdict was just but still insists on calling Z a murderer in the “common usage” of the word.

Bone is also chastised for insurance fraud, which he admitted to, but he didn’t fake an accident or otherwise bilk an insurance company; he used false paperwork for two months until he could afford to buy insurance so he could work as a delivery driver.

He’s also taken to task for being attracted to pregnant women. I’d think that women would take that as validation of the true beauty of womanhood, or something like that, and they probably would If Bradley Cooper had said it. It’s creepy and inexcusable coming a man as physically unattractive as he, especially if he doesn’t toe the party line.

Yesterday, paralegal Matthew Apperson, convicted of the attempted 2nd degree murder of George Zimmerman, armed aggravated assault and shooting into a vehicle, was sentenced to 20 years of incarceration: