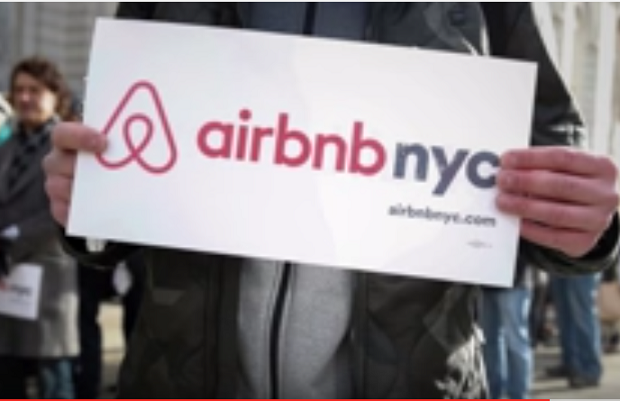 On Friday, New York’s Governor Andrew Cuomo signed into law NY State Senate bill S6340, making it illegal in the state of New York to advertise “for the use of dwelling units in a class A multiple dwelling.”  This law is aimed at Airbnb, a San Francisco-based homestay network that coordinates the rental of private properties by the homeowners.

Not unlike Uber, a transportation network, Airbnb eliminates the often union-driven marketplace for a given service; with Uber it’s taxis and with Airbnb, it’s hotels.  And as with Uber, unions are not happy with the explosion of Airbnb and lobbied in New York state for the passage of this law that establishes a minimum of at least 30 days for peer-to-peer rental of private property and provides for fines up to $7,500 for those in violation.

New York Governor Andrew Cuomo banned short-term rentals on Airbnb after he signed a bill on Friday making it illegal to list unoccupied apartments on the service for stays under 30 stays.

Airbnb had made an aggressive push against the proposal and spent $11 million on a super PAC to fund a campaign against the measure. The company also commissioned a report showing American’s support for home sharing services.

The San Francisco based company’s unsuccessful efforts culminated on Wednesday with a four-page proposal from Airbnb offering a set of compromises. Proposed measures in the letter included registering short term rental hosts and tourists taxes in New York.

The new law will fine violators up to $7,500 for renting residences for less than 30 days, when owners or landlords are not present at the property.

Airbnb said on Wednesday that it was willing to crack down on individuals in New York City who rent out multiple homes, bowing to pressure from politicians and tenants’ rights groups who say the company has worsened affordable housing issues in the city.

The company also said, in a proposal to city officials, that it was willing to create a registry of hosts to make it easier for the state to enforce housing rules and that it would create a hotline for neighbors’ complaints. It would bar hosts who violated local regulations three times, and it said it had already taken 3,000 commercial operators off its service.

The Wall Street Journal has more on the worsened affordable housing argument against Airbnb.

The tussle reflects the challenges that Silicon Valley companies face in bringing new approaches to entrenched industries. Airbnb and Uber Technologies Inc., both based in San Francisco, have fought resistance from lawmakers, as well as hoteliers and taxi commissions who view the firms as a threat to their business.

New York lawmakers said landlords were keeping apartments off the market for use as Airbnb rentals, driving up the cost of leases in a city with some of the highest rents in the world. “They’ve been flagrantly violating a law that’s been in place for six years,” said state Assemblywoman Linda Rosenthal, a Manhattan Democrat. Ms. Rosenthal, a co-sponsor of the bill, said the fines would push apartment owners to open up more units to long-term tenants.

For its part, Airbnb contends its service allows for greater numbers of tourists to visit by keeping overnight stays affordable and that only a fraction of its hosts were running afoul of the rules.

Union involvement in this law was pivotal.

A political organization funded by a top hotel-trades union has helped develop a multifaceted lobbying effort to persuade New York City politicians to curtail Airbnb, according to emails and records reviewed by The Wall Street Journal.

Unite Here, another hotel union close to Mr. de Blasio that opposes Airbnb, has given $400,000 to the Campaign for One New York, a now-defunct political organization whose activities have drawn state and federal investigations.

Mr. de Blasio has proven a willing ally. He hired employees for a special unit to go after illegal apartment-share listings and promised last November to spend about $10 million on enforcement over the next three years. Manhattan City Councilman Helen Rosenthal has proposed a bill that would raise the fines on illegal listings. Share Better is pushing for even more enforcement.

Hours after Gov. Andrew M. Cuomo of New York signed a bill that would impose steep fines on Airbnb hosts who break local housing regulations, Airbnb filed a federal lawsuit contending the new law would cause it “irreparable harm.”

. . . .  In its lawsuit, filed Friday afternoon in Federal District Court in the Southern District of New York, the company contends that the law violates the company’s constitutional rights to free speech and due process, as well as the protection it is afforded under the Communications Decency Act, a federal law that says websites cannot be held accountable for content published by their users.

The new law “would impose significant immediate burdens and irreparable harm on Airbnb,” the company said in its complaint. “In order to be assured of avoiding liability, including potential criminal prosecution, Airbnb would be required to screen and review every listing a host seeks to publish.”

The lawsuit was filed against Eric T. Schneiderman, the state attorney general, Mayor Bill de Blasio and the City of New York.

New York lawmakers, including State Senator Liz Krueger, one of Airbnb’s primary legislative foes, counter that they had the Communications Decency Act in mind when they drafted the bill, which is why it holds the hosts responsible for advertising illegal listings and does not impose any fines on Airbnb.

“This is an issue that was given careful, deliberate consideration, but ultimately these activities are already expressly prohibited by law,” Rich Azzopardi, a spokesman for Mr. Cuomo, said in a statement.

Mr. Schneiderman said in a statement: ”Airbnb can’t have it both ways: It must either police illegal activity on its own site, or government will act to protect New Yorkers,” Austin Finan, a spokesman for Mr. de Blasio, said in a statement. . . .

Can’t wait to use this story to torture a liberal friend that liberals are creationists.

Free markets are Darwinian, wherein competing businesses and industries must adapt or die. The best ideas that are best executed will be ‘naturally selected’ in a sense.

Conversely, liberals prefer government control over markets via heavy regulation, wherein their Government is God. They are like creationists in this regard.

Liberal Lexicon: Home Ownership – The process of passing over money for the possibility of being able to live in a residence, unless the State decides a homeless person who has forced themselves into the property is better suited. Does not include the ability to use the purchased property for any other means not directly approved by the State, unless an appropriate amount of money is passed to an elected representative to make an exception.

seattle also took a swipe at AirBnB under the guise that it was causing a housing crisis. We surmised that it was because it cuts into the hefty hotel tax

Tell me again why I’m supposed to surrender my guns?